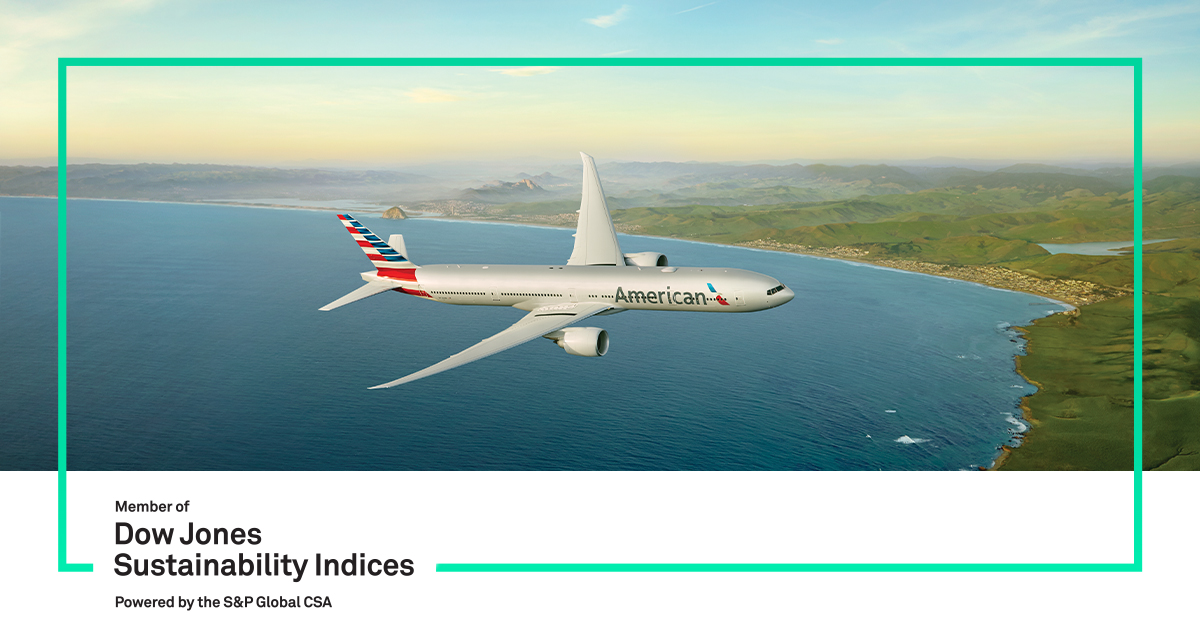 FORT WORTH, Texas, December 13, 2022 /CSRwire/ - For the second year in a row, American Airlines is the only passenger airline to be included in the Dow Jones Sustainability North America Index (DJSI). American increased its year-over-year score by more than 20%, a strong recognition of the progress the airline has made toward reaching its environmental, social and governance (ESG) goals.

The 2022 DJSI comprises North American sustainability leaders as identified by S&P Global through the Corporate Sustainability Assessment. It represents the top 20% of the largest 600 North American companies in the S&P Global Broad Market Index (BMI) based on long-term economic, environmental and social criteria.

“Returning to the Dow Jones Sustainability North America Index for a second straight year is a tremendous honor,” American’s CEO Robert Isom said. “We know there’s still a great deal of work to do, but I’m proud of the strides our entire team has made over the past year. As we continue to build American to thrive forever, we will keep holding ourselves to this high standard of aviation industry leadership.”

In 2022, American became the first airline in history to receive a CORSIA-certified batch of sustainable aviation fuel (SAF) and furthered its commitment to SAF usage by announcing a new agreement to purchase an additional 500 million gallons over five years from Gevo, Inc., an important step in reaching the airline’s goal to replace 10% of its jet fuel with SAF by 2030. As part of its commitment to achieving net-zero greenhouse gas emissions by 2050, American also became the first U.S. airline to make two direct investments focused on the development of both hydrogen-electric propulsion technology and the future of hydrogen distribution logistics.

American was also recognized for its diversity, equity and inclusion efforts. The airline has received high scores from leading benchmark organizations including a top score of 100 from the Disability Equality Index; the highest possible rating of 100 from the Human Rights Campaign’s Corporate Equality Index, which named American a 2022 Best Place to Work for LGBTQ equality; and recognition from the Seramount Inclusion Index for the fifth straight year for the airline’s efforts to create an inclusive workplace.

In addition, the DJSI noted American’s continued efforts to advance its ESG goals while maintaining the highest standards of safety. Last year, the airline successfully mitigated 100% of identified safety risks and hazardous situations for mainline flights. The achievement comes during a year in which American operated the largest flight schedule of any U.S. carrier.

The full results and list of Index constituents are available online.

American released its latest ESG Report in July, which details the progress the company made on key ESG priorities in 2021 and provides the airline’s updated analysis of its path to net-zero emissions by 2050.