For Marine Tyler Klemas, Supporting Veterans Is a Passion

A winding road led Klemas to Duke Energy, which recruits veterans because of their training, technical skills and leadership

For Marine Tyler Klemas, Supporting Veterans Is a Passion

A winding road led Klemas to Duke Energy, which recruits veterans because of their training, technical skills and leadership

If Tyler Klemas had known then what he knows now, he would have looked for a job as a lineworker when he left the U.S. Marines in 2010.

Now in his fifth year in Duke Energy’s Customer Delivery Business Transformation group in Charlotte, he has made it his “secondary job” to spread the word about opportunities for veterans in the energy industry.

Supporting veterans is his passion, both inside and outside of the company.

Klemas is one of more than 2,000 veterans who work at Duke Energy, which recruits veterans for their skills, adaptability and leadership qualities. He chairs the Charlotte chapter of the Together We Stand employee resource group, whose 450 members mentor newly hired veterans and volunteer to help veterans and their families in the community.

Klemas never intended to serve in the military. But his plans changed after terrorists attacked the United States on Sept. 11, 2001. He was in the 11th grade, intending to go to college and play football. 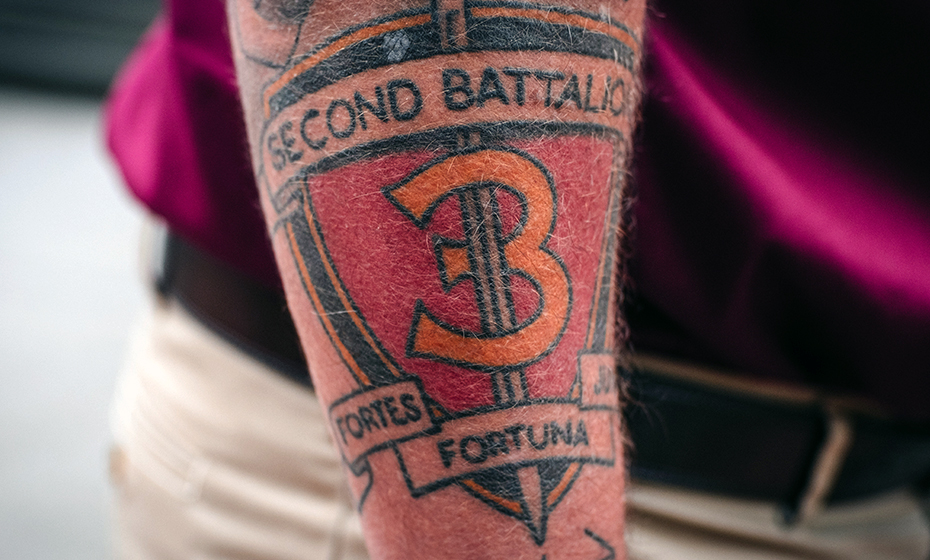 “I may not have even understood the full magnitude of what had happened,” Klemas said. “But I knew that was one of those events people experience in life where they remember where they were when it happened.” Tyler was in the library at Murphy High School in Mobile, Ala. “I felt it was my duty as an American citizen to enlist.”

His most cherished memory of Camp David came when he cooked an omelet in a new mess hall for then-President George W. Bush. Klemas eats an omelet every day – he now raises his own chickens – but he describes those four to seven minutes cooking for the president of the United States as probably the longest in his life, trying not to mess up.

He need not have worried. Bush proclaimed it the best omelet he’d ever eaten and awarded Klemas with a Presidential Challenge Coin, given to service members for special achievements.

In Afghanistan, Klemas took part in the successful but grueling Operation Whalers, a follow-up mission to Operation Red Wings in which 19 special operations personnel were killed.

“We were walking, fighting, sleeping, rinse, repeat,” he said. “We lost four Marines during that deployment and numerous others were shot or injured in other ways. The fighting was intense.”

When his four-year commitment ended in 2007, Klemas thought he was done with the Marines – but, as it turned out, the Marines were not done with him. He was called back to serve in Iraq, where he spent most of his deployment in the safety of the base.

His life took another turn in 2018 after his wife, Emilee, became pregnant with the first of their two children.

“Your whole emotional and mental dynamic shifts once you enter a child into the picture,” Klemas said. He wanted a safer job with more reliable hours, and he found both at Duke Energy. He is a senior business systems specialist, working to make Customer Delivery processes more efficient.

Last month, on behalf of the company, he led the effort to bring The Wall That Heals, a replica of the Vietnam Veterans memorial in Washington, D.C., to Charlotte Motor Speedway.

“They support our mission,” Klemas said of Duke Energy. “They’ve been 100% on board.”

The company also provides 120 hours of full pay to employees who are called up to serve in the National Guard and Reserve. In recognition of its support for those employees, Duke Energy received the 2018 Secretary of Defense Employer Support Freedom Award from the U.S. Department of Defense.

“These soldiers sacrificed, their families have sacrificed. It gives us a chance to not only give back, but we gain by offering careers that are often a good match,” Robinson said. “They have technical skills, an understanding of electronics and mechanical aptitude. Also, they’ve operated in a high-risk environment, and many things we do in the field are definitely high risk, so it requires a healthy respect for dangers in the field.”

Klemas believes veterans are especially suited to the role of lineworker.

Klemas has made it his mission to get the word out.

Learn more here about jobs resources for members of the military.

Interested in a job at Duke Energy? Go to the careers page.