Water for injection (WFI) is typically the highest quality, low-bioburden bulk water used in the production of active pharmaceutical ingredients, parenteral drug substances and drug products. As defined by the FDA and the EMA, WFI bioburden levels are orders of magnitude lower than purified water.

For nearly a century, WFI has been produced by distillation, which ensures a significant reduction of all ions, microbes, and endotoxins. Distillation boils and condenses feedwater using multiple effect or vapor compression stills, both requiring large amounts of energy to operate.

In 2017, the European Pharmacopeia joined the US Pharmacopeia and many other global pharmacopeias—with the exception of China—allowing alternative methods of generating WFI that produce water of an equivalent quality. This opened the door for ambient WFI production, which doesn’t require distillation. These membrane-based techniques include reverse osmosis (RO), electrodeionization (EDI), and ultrafiltration (UF), which have the potential to reduce utility use, decrease facility footprints, and enhance sustainability for biopharma companies.

The downsides of WFI by distillation

Distillation typically uses natural gas to generate steam to boil bulk water and produce vapor, which is then condensed using cooling water. WFI is then heated again and continuously circulated at high temperatures—ISPE guidelines suggest 65°C is sufficient for self-sanitizing—to limit microbial growth, and later needs to be cooled just prior to use. Each step in this process adds considerably to the facility’s energy load. If we remove steam needs for major users like WFI, we can more easily accommodate alternative heating sources (e.g., electricity).

As an example, a 1.1-million-square-foot pharma facility we recently evaluated dedicates as much as half its heating and cooling needs to WFI production. The facility (designed before 2013) leverages vapor compression distillation, a technique that uses less steam than multiple effect distillation but far more electricity, and requires more cooling and pretreatment than membrane filtration. The pie graph below provides similar data from a different site, clearly showing that WFI production accounts for the bulk of the campus’ natural gas (steam) consumption. 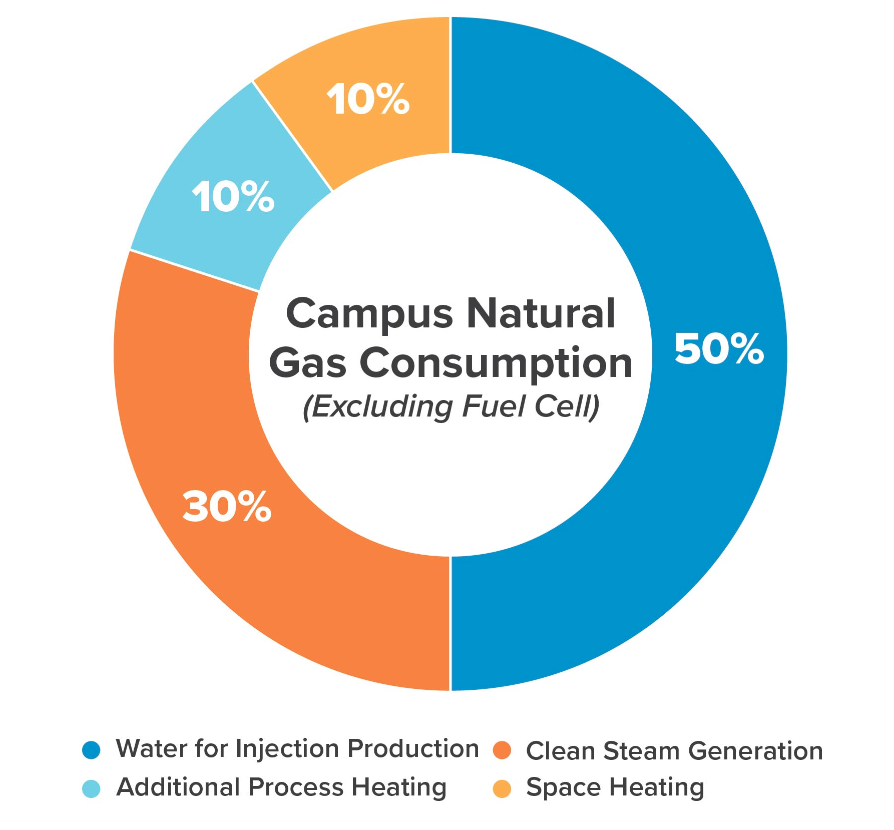 This heavy natural gas consumption and water waste makes WFI by distillation a prime target for resource reduction measures and improving utility inefficiencies, and an opportunity for sustainability efforts.

The fuel of choice for producing steam in a pharma plant is typically natural gas, which generates a larger carbon footprint than a sustainable electric generation option. The extensive energy demands of distillation quickly make steam an enemy of any decarbonization efforts. Even if a facility abandons natural gas, the amount of energy required to support WFI by distillation using electric boilers continues to put a strain on resources–one great enough that it may be impractical for the demands of larger WFI generation systems. Furthermore, considerable cooling water is inherently required with distillation technologies due to the phase change of the pure steam produced during the distillation process. This includes not only energy consumption due to mechanical refrigeration, but also blowdown and evaporation losses at the cooling tower.

In contrast, ambient WFI production avoids significant temperature changes, incurs lower utility costs, and is all around more sustainable. This is important for the vast majority of life sciences companies—biopharma, startups, and CDMOs—with formalized sustainability goals.

Membrane-based equipment can often fit into tighter spaces as it tends to be smaller than distillation stills. Shrinking the footprint intensifies the productivity of each square foot, reduces the energy load of heating, cooling, and lighting a larger building, and can free up space for other functions or future expansions.

The hot water continuously circulated through stainless steel pipes for WFI distillation poses a burn hazard to operators. Ambient WFI eliminates this concern as storage and distribution occur at room temperature, mitigating the burn hazard by reducing the time the system is required to be hot (i.e., during sanitization). Alternatively, the use of ozone for WFI system sanitization is in vogue for ambient and cold systems, which eliminates the burn hazard but introduces a less severe safety concern—personnel exposure during sanitization.

Pharmaceutical manufacturing facilities that have high-purity water on site, and are distilling it to make WFI, will try to minimize the use of WFI to only the processes that demand it, such as many CIP (clean-in-place) cycles. Risk analyses point to where you can use purified water for such things as cleaning solutions and ancillary uses. This allows you to limit the volume of expensive-to-produce WFI and thereby limit the capital and operating expenses associated with higher volumes of WFI.

How is membrane-based WFI generated?

Membrane-based reverse osmosis systems for WFI production use ambient processes to generate WFI of a similar quality to distillation.

Whether distillation or membrane filtration, WFI requires high-quality feed water. It must be pretreated to remove chlorine, hardness, and other ions that could damage or foul equipment and downstream WFI equipment—notably RO membranes. Distillation systems may have pretreatment RO before the water enters the still. Ironically, the quality of this RO pretreatment water often meets the requirements for compendial WFI, yet needed to be distilled according to past EMA regulations.

Feedwater, which must be potable, is fed into a series of pretreatment steps to remove solids, hardness, media and silt, and chlorine and organics. The softener step that removes hardness relies on brine. In some jurisdictions (e.g., Southern California), the large amount of salt generated by this process cannot be added to wastewater and has to be trucked offsite, incurring additional costs.

The pretreated water may be stored in a break tank, after which it undergoes double-pass RO filtration, deionization, and ultrafiltration on its way to the WFI storage tank and facility distribution system. The WFI in this loop can be sanitized with ozone or heat, and is typically treated with UV light for ozone destruct, general disinfection, or TOC reduction before being stored and distributed.

The gold standard membrane systems use double-pass RO; however, in many cases WFI quality water can be achieved using single pass RO in addition to EDI and UF polishing.

RO membranes have the propensity to gather biofilms, which will shed endotoxin. To mitigate that risk, multiple safety steps are added to the system to prevent biofilm build-up.

Traditional distillation systems maintain WFI at 80C in both the storage tank and the distribution loop to minimize microbial growth. These systems then cool the WFI prior to its release from the outlet valves. Ambient systems can use ozone injection instead of heat to kill microbes and reduce TOC (i.e., food for bacteria), reducing the risk for endotoxin generation. UV light then removes ozone before WFI is released from the storage tank to the distribution loop.

Storage and distribution loops can be sanitized using either heat or ozone. For example, CRB worked with a client to engineer an ambient WFI system that relies on an ozonated storage tank and electric heating as backup. This onsite ambient WFI generation took the place of purchasing barreled WFI generated offsite and freed up a significant amount of storage space within the warehouse.

Transitioning a facility from WFI by distillation to membrane filtration

If a facility already uses RO and EDI to make adequate amounts of purified water, it may be possible to replace aging distillation WFI equipment with a membrane-based WFI system by tacking on a UF unit and bypassing the need for steam heat.

However, switching from a distillation system to ambient WFI production is a potentially more complex undertaking. Given that the industry has only begun to accept membrane systems over recent years, more time is needed before we see facilities making that leap—but those facilities will come, particularly if they’re incentivized by the space and utility constraints of distillation. ATMP manufacturers and animal health companies are strong candidates for switching from distillation to AWFI.

Our biopharma client wanted to market their injectable drug in Turkey, China, Russia, and South America, creating multinational regulatory complications because of differences in compendial requirements for WFI production.

They partnered with us to design an addition to their existing facility to produce this drug product, which required a new WFI generation system. The existing facility generated WFI with multiple effect stills but supplying the buildout with distilled WFI had disadvantages.

We compared the relative merits of going with their tried-and-true distillation system with the opportunity to install an ambient membrane-based system.

While the plant’s multiple effect stills were reliable, had few moving parts, were self-sanitizing, and recognized by pharmacopeias worldwide, they presented certain disadvantages:

The last point—the need for 120 psi steam—meant steam would have to be piped over to the new space, yet there was no campus distribution to get it there. It was going to cost ~$500,000 to run one line to power a new multiple effect still. We suggested looking at alternatives.

These systems are also recognized by all global pharmacopeias, can have lower utility consumption than membrane systems at higher generation capacities, and have a low pretreatment requirement. Their disadvantages include:

We decided to run a side-by-side comparison of the three equipment selections approximating their WFI needs, looking at utility use, space requirements and capital cost. For each category, we identified which method was the best option.

Membrane filtration came out on top in terms of electricity used, cooling needs, and pretreatment (Figure 3). Vapor compression has lower steam requirements than membrane since the client’s process requires WFI to be heated prior to the storage and distribution loop. Still, membrane filtration slashes steam use by almost one-third compared to the client’s current multiple effect stills.

The buildout was a new building with a premium square footage. Both distillation systems occupy more than twice the square footage than membrane filtration equipment (Figure 4).

The cost of pretreatment for both distillation options would drive this client’s capital costs far beyond that of ambient WFI generation systems, which include pretreatment in the process (Figure 5). In fact, membrane filtration is roughly half the price of the other options, even before factoring in the steam and other utilities that would have to be piped over from the existing facility.

The conclusion: membrane filtration is the clear winner

This analysis quantified the advantages of installing a membrane filtration WFI system from an energy, space, and capital cost perspective. CRB installed a 40 gpm membrane WFI system—one of the largest available generation capacities offered at the time.

Many pharmaceutical companies installed large distillation WFI systems fewer than 10 years ago and are unlikely to scrap these legacy systems for new equipment. It comes down to evaluating their manufacturing constraints, how reliable and efficient their current WFI setup is, and the regulatory requirements for their drug products.

It can take time to adjust to new technology, but there is no doubt that membrane filtration is an up-and-comer. The highest adoption rate is among contract manufacturers, startups, and those new to the industry and building new facilities. Their appetite for risk tends to be different as they seek to increase their margins. Plus, ambient WFI is a logical choice, especially if your process is starting from scratch and doesn’t need hot water. CRB recently completed an ATMP GMP manufacturing facility that is completely electrified, without steam distribution, which includes an ambient WFI system. While this is in a mild climate, it points to the potential energy savings amortized over the life of the equipment using this innovative technology.

If you want to explore the many advantages offered by installing an ambient WFI system, our engineers can help.

CRB is a leading provider of sustainable engineering, architecture, construction and consulting solutions to the global life sciences and food and beverage industries. Our more than 1,600 employees provide world class solutions that drive success and positive change for our clients, our people and our communities. CRB is a privately held company with a rich history of serving clients throughout the world, consistently striving for the highest standard of technical knowledge, creativity and execution.