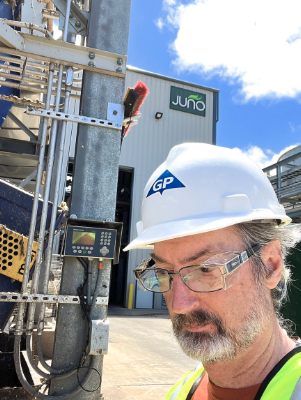 Twelve years ago, Wayne Winkler had an idea.

He wondered, could he "cook" garbage to recover material that otherwise went to landfills? To test his theory, Wayne sent a teammate to the fast-food restaurant around the corner from Georgia-Pacific's Research & Development Center in Neenah, Wisconsin, in search of paper-laden garbage. Wayne didn't know at the time it would be the first step on a path toward a transformative new waste diversion technology, although he had high hopes.

"They looked at us very, very strangely when we asked for their trash," laughs Wayne, now the lead technical consultant for Georgia-Pacific-owned Juno® Technology, part of Koch companies.

Back at the Georgia-Pacific R&D center, Wayne and a coworker tossed their newly acquired bags of garbage directly into a prototype autoclave — a giant, cylindrical pressure cooker. The unsorted garbage was sanitized and cooked using pressurized steam, in hopes it could remove the moisture-resistant coatings from the restaurant's food packaging and recover usable paper fiber. 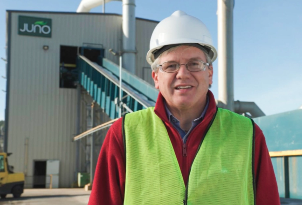 "We strongly believed this could be a way to improve the supply of wastepaper and address the issue of sending waste to landfills," Wayne recalls.

When the team opened their prototype autoclave after running the first batch of garbage, they found their hypothesis was correct — it worked.

"There was a huge sense of accomplishment when it worked," Wayne says. The team aspired to further develop this first-of-its-kind technology to process tons of raw garbage and recover usable paper fiber. This would not only provide Georgia-Pacific with more fiber for making recycled paper products but would also allow customers to see their products being recycled.

Landfills are an environmental challenge facing many communities around the world. Today, about half the municipal solid waste generated annually in the United States, more than 146 million tons, ends up in a landfill, according to the Environmental Protection Agency.

That's what makes what is now known as Juno Technology — and the Juno™ Clave — a game changer. Georgia-Pacific's new waste ersion and recovery technology doesn't use waste already in traditional recycling streams. Instead, the process decreases the amount of solid waste destined for landfills or incinerators, transforming multiple waste streams into valuable commodities.

"We thought, why not recycle metals too?" says Christer Henriksson, Juno's president. "Why not go for the plastics that are really hard to recycle? Why not take the food that's in the garbage and turn it into biogas?"

The team continues to build on Juno's capabilities. It can capture recycled paper fiber for new paper goods, biogas for energy, and reusable plastics and metal.

After a successful pilot in Savannah, Georgia, where the team trucked in garbage from various sources, including the Atlanta airport, Juno was ready for a bigger challenge. Georgia-Pacific, which is also owned by Koch, built the first commercial scale Juno plant in Toledo, Oregon, to validate the recycling and resource recovery program at scale. Although the Toledo facility, which opened in May 2021, recovers only paper fiber and metals, plans call for future plants to recover plastics and produce biogas from food waste.

The Toledo plant planned to initially process commercial waste from places like stadiums, restaurants and airports. That garbage is "safe" feedstock for recycling, meaning there's little risk of finding old garden hoses or leftover items from home projects, which can damage and shut down machines. But then the global pandemic hit and there was no waste being generated at public venues, office buildings and the like.

"We had planned to process residential waste in one to two year's time," says Trent Moberg, Juno's vice president of technology. "Due to the pandemic and more people working from home, not going to office buildings or sporting events, there was very little commercial waste, but an increase in residential waste. So we adjusted our capabilities quickly to transform to the needs of the community."

"All it would take is for somebody to throw away a few strings of Christmas tree lights, which would then find every rag and bedsheet somebody else had discarded," Trent says. "That would make a massive ball we couldn't process."

For the first few months, as the Juno team worked to solve the Christmas light dilemma and other problems that crop up from residential waste streams, they overcame every challenge with ingenuity, entrepreneurial mindsets and teamwork. They did it, proving along the way that Juno can handle both commercial and residential waste streams effectively – and have real impact in the communities where it operates.

In the year since it came online, Juno's plant in Toledo has erted about 50% to 60% of the waste it captured — more than 33.6 thousand tons — which otherwise was headed for three local landfills. Juno sends the paper fiber it recovers, Juno® Fiber, to the Georgia-Pacific mill next door, where it's added with other recycled material to be made into containerboard for corrugated boxes.

New, larger plants will process plastics, including high-density polyethylene and polypropylene packaging. Food waste, which is the single largest material to be landfilled, will be turned into biogas through Juno's anaerobic digestion process. Biogas can potentially be used to fuel facilities or be sold back to the electric utility for use on the power grid. Georgia-Pacific is currently exploring sites in the U.S., Australia and the United Kingdom and expects to start construction on a new site in 12-24 months.

With that promise, it's no surprise Juno has garnered international attention, even before it went live. Franz Cosenza, Juno's Toledo plant manager, has fielded calls since 2019 about Juno Technology from current and potential customers, as well as cities around the world.

"They had all heard of Juno and were very interested in when they could start using it or get their hands on the paper fiber," he says. "Many of them want to make 100% of their products out of Juno™ Fiber."

Juno received third-party certification for fiber chain of custody, which means there is a verified tracking process for the material validating it meets the requirements of the certification, and now "Juno™ Fiber Certified" products can be offered by Georgia-Pacific's box plant in Olympia. In the future, consumer products will be branded as being composed of Juno-recovered material erted from landfills and incinerators.

For now, though, the team is inspired daily that Wayne's idea to "cook" garbage has turned into a technology that could have such impact on the world.