When I was growing up, I had so many ideas of what I was going to be and who I wanted to be. All of that changed when I was in high school. The school had recruiters from the United States Marine Corps spend the day giving speeches about their core values – honor, courage and commitment. From that moment on, I knew exactly the path I wished to take. As soon as I became of legal age in September of that year, I enlisted. Soon after that, I was on my way to Parris Island.

This was my first time on a plane, and my first time away from my family without any sort of communication. When I arrived, I got to place one phone call. After that, I only received “snail mail during my three months of basic training.

You would be hard pressed to find a more diverse group than that of my fellow recruits. Not only was everyone so unique culturally, they also came from every corner of the country, resulting in a geographically diverse group, as well. I was extremely proud to have been a part of this melting pot. 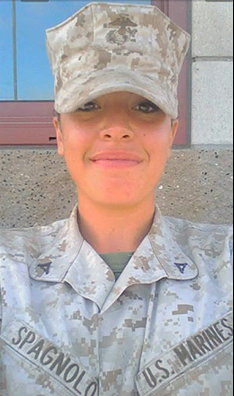 Toward the end of training, we went through what is called “the crucible.” This 54-hour training is in the wilderness and requires hiking over 70 miles of terrain where you apply mental, physical and moral training you have learned during the previous weeks. With limited amounts of food and sleep received during this time, I learned to fully trust and rely on my fellow recruits.

In April 2008, I was stationed in Camp Pendleton, California, as a Motor Transport Operator with the B5 Battalion and was the first woman to arrive. I thought I was going to feel alone and excluded. However, the exact opposite happened. 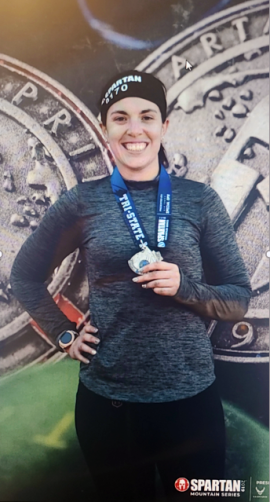 Regardless of your background or where you grew up, everyone needs to be treated equally. Just because I was a woman in a male dominated occupation did not mean that I was exempt from the job duties. Like anyone, some tasks were more difficult for me to accomplish, however, there were many strengths that I was able to dominate, as well. Completing the same tasks and heavy physical training daily helped build life-long bonds. These Marines were no longer just people I worked alongside of, they became my new family.

I’d like to leave you with this food for thought and lessons learned. There is no “I” in team. Use your strength to propel yourself and others forward, and lean on others when weakness presents itself. Be teachable, and be a coach – not only in a sport but in life.  Always be open minded, always be optimistic and always believe in yourself and others.