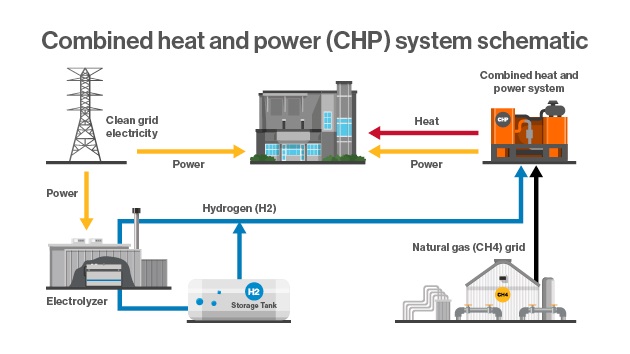 Just about every office or institutional space in North America requires power, heat and hot water. Think of an airport, or an industrial facility, a hospital or school. Think of Winnipeg in winter. Think of Houston in summer. That’s an awful lot of energy.

Heating and cooling for buildings contributes 31% of greenhouse gas emissions globally. In the province of Ontario, alone, building heat is the second largest source of GHGs.

Enbridge is committed to the energy transition—and a first-of-its-kind in North America pilot project at our gas utility’s Technology Operations Centre (TOC) in Markham, ON is yet another initiative propelling us forward.

Enbridge Gas Inc. announced today that it’s working with 2G Energy and CEM Engineering to install a combined heat and power (CHP) system that can use emissions-free hydrogen to heat and power the TOC. The 120,000-square-foot facility in Markham is home to approximately 197 Enbridge employees.

2G Energy will provide the CHP system later this year. It will be able to operate with a minimum blend of 25% hydrogen to 75% natural gas, and up to 100% pure hydrogen.

The project’s aim is to run the system on 100% Enbridge Gas-supplied hydrogen within a year. The expected GHG reduction when the system is running on 100% hydrogen is about 133 tonnes of CO2e annually, or the equivalent of removing approximately 28 passenger vehicles from the road each year.

Simply put, the CHP system’s engine drives a generator to produce electricity with the residual (or waste) heat, captured and used for heating, potential cooling or steam generation.

Enbridge Gas has been producing hydrogen at the Markham facility to blend with its utility natural gas supply since 2018.

While the pilot project is small in scale, its implications are striking.

“We are proud to work with 2G Energy to advance this technology and expand our hydrogen hub in Markham,” said Michele Harradence, President of Enbridge Gas Inc. “This is an important example of the investments Enbridge Gas is making across multiple markets to green the natural gas grid while continuing to meet the demand for safe, reliable and affordable energy."

Said Ontario Minister of Energy Todd Smith: “Our government’s Low-Carbon Hydrogen Strategy has ensured Ontario is well-positioned to become a leader in the growing hydrogen economy. I commend Enbridge Gas on continuing to work on innovative solutions that are helping to transform its natural gas grid and support our work on building a clean, affordable and reliable energy future for our province.”