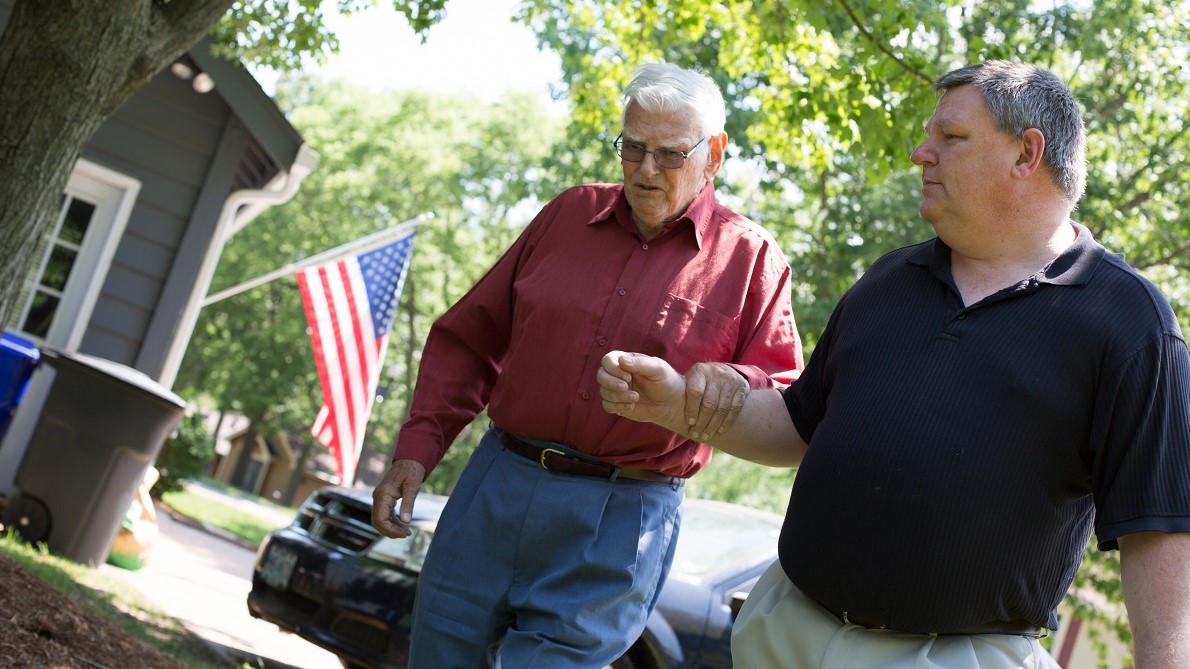 Chad Schrieber wants to help others avoid what his father and family have gone through.

Many people think that they would never fall for a scam. In reality, it can happen to anyone.

Arthur Schrieber Jr. of St. Louis was restless. He just knew his life was going to change the next morning, so he was too excited to sleep.

After tossing and turning, Schrieber, 84 at the time, finally got out of bed in the wee hours of May 16, 2017, and put on his best suit and tie.

Then he began waiting for the Publishers Clearing House prize patrol to deliver his grand prize that day.

“When my dad told me he had won the PCH sweepstakes, bells and whistles went off in my head,” said Arthur “Chad” Schrieber III, a U.S. Bank application developer based in St. Louis. “I thought, ‘This is not good.’”

To make matters worse, a van did pull up in front of the Schriebers’ home that day, and someone came to the door with balloons and a gift bag. But it wasn’t PCH with a big check – it was a mattress company representative who eventually talked the elder Schrieber into buying a $5,000 bed he didn’t need, with an 18 percent loan he couldn’t afford.

Arthur Schrieber’s vulnerability – and Chad’s efforts to protect him - eventually sent Chad on a journey to learn more about elder fraud. He researched the problem, developed a presentation to share his prevention tips, and even went on the public radio show Marketplace to talk about his experience.

Chad’s father, who passed away in 2020, had been the Chief Financial Examiner for the state of Missouri. During his career, he became all too familiar with fraud. Nevertheless, as he got older and his mental health deteriorated, he began to invest in scams that wiped out his retirement savings.

Arthur Schrieber would receive solicitations urging him to invest in everything from bitcoins to binary options, in which the payoff is a fixed monetary amount – or nothing. Once a scammer called claiming that a government agency wanted to give him a $9,000 grant – but first he had to wire transfer $750. Arthur was so excited at the prospect he left the house to hop into the car while still on the phone with the scammer. Chad, noticing something was unusual, jumped in the car with his dad and asked him to put the call on speaker.

Instead of going to a local drugstore to send a money order as the scammer requested, though, Chad had his dad drive to his longtime bank and he explained to the branch manager what was going on. The manager took the phone and handled the scammer. End of scam, or so they thought.

“While we were sitting with the banker, who canceled dad’s credit card, his phone rings. It was a second fraudster, who said, ‘I heard you may have fallen for a scam.’” Chad said. “Then he offered to help my dad get his money back, if my dad would give him 20 percent of whatever they could return to him.

“This is key in my presentations – this isn’t just someone at their home random-dialing numbers,” Chad said. “These are organizations with business plans, processes and procedures.”

Sadly, the Schriebers’ situation is not uncommon. The National Council on Aging (NCOA) reports that sweepstakes scams, government impersonation scams and robocall scams are the most common forms of elder fraud scams. NCOA estimates that in 2021, there were more than 92,000 older victims of fraud resulting in $1.7 billion in losses – a 74% increase in losses compared to 2020. Consumer Reports, though, noted that estimates of the financial impact of elder fraud losses may in fact be much higher, potentially costing families nearly $36 billion a year based on a broader definition.

For Chad, this growing national problem became very personal. Since his dad’s death, Chad continues to educate others on fraud tactics and how to combat them.

Over time, he compiled so much information that he and his wife, Kelly – who is a cybersecurity expert –put together a guide, “Outsmarting the Scammers,” that they’ve presented many times with hopes of spreading the word more broadly. Chad also participated in an Ask Me Anything with U.S. Bank Employees on the topic.

“The angst my dad was experiencing that morning the bed people showed up was absolutely tied to the many emails he was getting saying he was a winner,” he said. “It was heartbreaking.”

U.S. Bank has a strong enterprise policy on elder and vulnerable adult financial exploitation prevention, says Ratika Hura, Manager - Fraud Prevention Training and Awareness at U.S. Bank. “This is important work to us, and we want to be a line of defense for elders and their families. In addition to providing training and up-to-date reference materials for our employees, we conduct campaigns to educate our customers and communities.”

No one is immune to being scammed, but education can help you reduce your risk. To learn more about elder financial exploitation and cybersecurity, visit the U.S. Bank Financial IQ resources to protect your assets from fraud. You can also talk to bankers at your local U.S. Bank branch, who can help you identify fraud “red flags” and assist you with ways to prevent it.

5 tips to keep your loved ones safe from scammers from Chad: