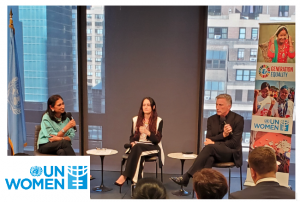 On Wednesday, September 21, Logitech joined industry leaders, government ministers and senior UN Women representatives at the UN Women Generation Equality Event in New York City to discuss gender equality. The UN Women’s flagship Generation Equality campaign is a landmark global initiative with the ambition of driving commitments that embed gender equality as a central component of the economy of tomorrow.

Logitech CEO, Bracken Darrell, had the opportunity to participate in a panel discussion called “Walking the Talk” to highlight the importance of gender equality and elaborate on Logitech’s long-term programs and actions the company is taking to shift the gender imbalance. “Of course there is still work to do, but we can be proud that we’ve had the opportunity to share the role we are playing in achieving gender equality; and for the influential United Nations platform to advocate for others to follow our lead. Every company in the world needs to view gender equality as imperative and we certainly do,” said Darrell.

Darrell shared Logitech’s most recent commitment to UN Generation Equality, the coalition for gender fair procurement, which aims to urgently advance gender equality by leveraging the collective trillions of dollars of spending power of corporate procurement as a lever for change. He also talked about the company’s long standing efforts to improve gender equity in technology via partnerships with Girls Who Code and the Women Who Master series.

For more information on the Coalition For Gender Fair Procurement visit https://genderfairprocurement.com/