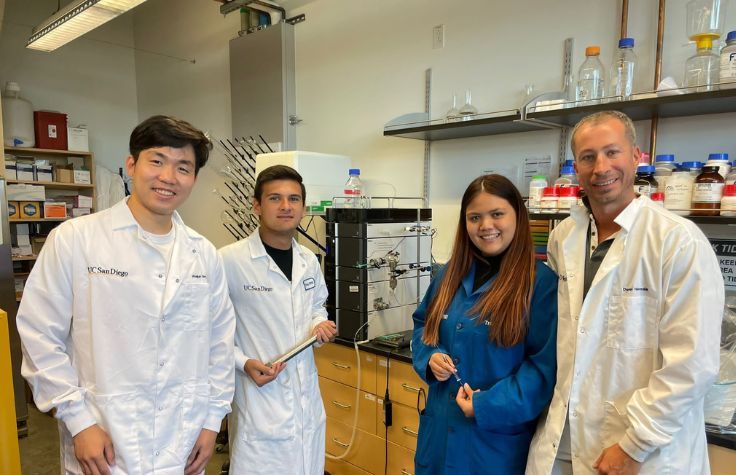 Growing up in Tijuana, Mexico, Olivia Graeve was interested in pursuing the sciences but didn’t quite know how to make a career of it. To her knowledge, no cross-border student exchange programs for scientific research were available to her. She was able to attend college and graduate school in the US and eventually joined the University of California San Diego as a professor in the Department of Mechanical and Aerospace Engineering in 2012. As the first Latina engineering professor to be hired at the school, Graeve wanted to help other students make connections between advanced science study and career paths.

The summer after she joined UC San Diego, she founded ENLACE (Spanish for “link”), a program that uses science and engineering as a bridge for high school and college students to build professional connections and personal friendships. Its goal, Graeve says, is to empower them with the skills to choose a career in the sciences and pursue a doctorate.

Prospective high school and college students from Mexico and the US apply with their scientific interests in mind. Graeve and her colleagues then help match them with professors who mentor the students for a summer. During their summer experiences, the students work in fields ranging from marine biology to the physical sciences, and even get a chance to contribute to published manuscripts.

The program has expanded every year, from five students in 2013 to 185 in 2022. With ENLACE’s significant growth comes the need for additional funding, which is put toward scholarships: Graeve says they want to create opportunities for all kinds of students, regardless of their socioeconomic status. The scholarships help cover participants’ room and board for the duration of their research experience.

To tackle this, Graeve began reaching out to local companies in the San Diego area, which she says are the most interested in local students’ development. This year, Illumina Corporate Foundation provided funding for 14 students as part of its corporate social responsibility (CSR) program—one of the company’s main focus areas is increasing equitable access to STEM education.

“ENLACE is a one-of-a-kind program that unites students from both the US and Mexico through science and engineering. It provides real-world lab experience to students so they can explore the possibilities of solving societal issues relating to equity, inclusion, and social justice,” says Vanessa Light, the CSR program manager at Illumina. “The work that Graeve is doing with these students is a perfect intersection of the power of bringing together communities through science and we are proud to support it.”

UC San Diego is globally recognized for its academics as well as for supporting diversity. Nature Index ranked it ninth among the world’s best biomedical research institutions. One in three women at UC San Diego graduates with a STEM degree—the highest proportion of any college in the US, and three times the national average.

UC San Diego’s main campus is less than two miles from Illumina’s worldwide headquarters, about 30 miles from the US-Mexico border. The institutions lie within the binational megaregion that comprises San Diego and Imperial counties in California and the state of Baja California, which has a combined population of 7.1 million and an economy worth $230 billion. And there are STEM career opportunities on both sides of the border: San Diego has the third highest number of life science and biotech jobs in the US, and Tijuana has become known as the world capital of medical device manufacturing. ENLACE has been invaluable for students from a range of backgrounds. Evan Sandoval was an undergraduate studying nanotechnology in Tijuana when a biology professor encouraged him to apply for ENLACE in 2017. The program showed him a path to pursuing research as a career while allowing him to explore a new area of science.

“ENLACE [made] a big change in my life, as an opportunity that not only helped me start the career I am in, but also made me rethink the area of science I was interested in,” Sandoval says. Although he’d been studying nanotechnology engineering, he was also interested in plant biology—particularly how it’s tied to food security in the face of climate change.

It could have been difficult to switch fields between undergraduate and graduate school, but ENLACE gave him that chance. Now he’s a third-year PhD student in the same lab ENLACE had placed him in, studying the genes involved in plants’ stress response. Considering that, he says, “I want to continue my career in research, and I’m not sure I would be here if [not for] ENLACE.”