How AMD Is Advancing Energy Efficiency for IT Users

On Energy Efficiency Day 2022, AMD shares how the company is helping its customers and end-users reduce their energy use and GHG emissions

How AMD Is Advancing Energy Efficiency for IT Users

On Energy Efficiency Day 2022, AMD shares how the company is helping its customers and end-users reduce their energy use and GHG emissions 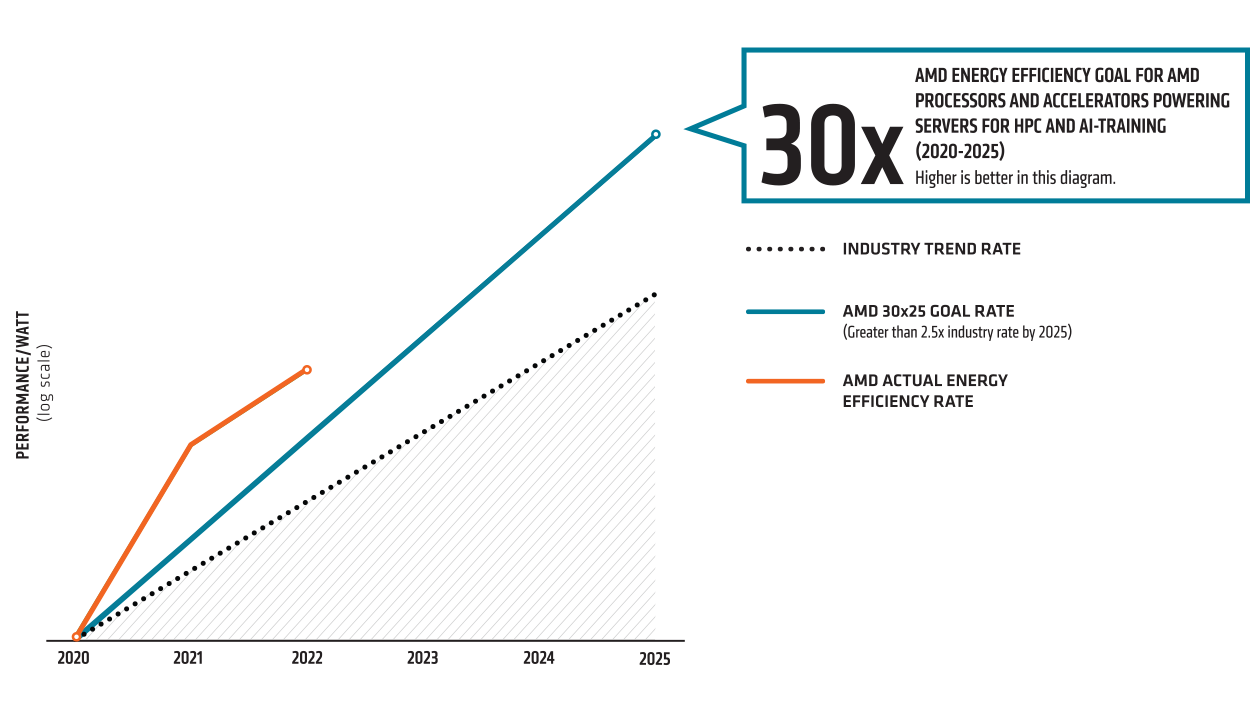 Maximizing the computing performance delivered per watt of energy consumed is a vital aspect of our business strategy. Our products’ cutting-edge chip architecture, design and power management features have resulted in significant energy efficiency gains, and we have the track record to prove it: we achieved a 31.7x increase in performance per watt for processors in mobile devices, for example, exceeding the AMD 25x20 Energy Efficiency goal (2014-2020).1

Today, AMD RyzenTM processors are continuing to help deliver energy-efficient laptops without compromise, including our Ryzen 5800U processors with up to 43 percent better power efficiency than Energy Star 8.0 requirements.2 An enterprise that upgrades 10,000 PCs from four-year-old Ryzen 2500U processors to new Ryzen 5800U processors would save approximately 272,000 kWh of electricity and 183 metric tons of CO2e, equivalent to 3,187 tree seedlings grown for 10 years.3

Energy efficiency is paramount when it comes to supercomputing, which is the concentration of processing power across multiple, parallel computers. The Green500 list ranks the most energy-efficient supercomputers in the world. The June 2022 update showed AMD EPYC processors and AMD Instinct accelerators power the most efficient supercomputers in the world, including four of the top five, eight of the top ten, and 17 of the top 20 most efficient. The Frontier test and development system (TDS) supercomputer secured the top spot in the Green500 June 2022 update based on optimized 3rd generation AMD EPYC processors and AMD Instinct MI250x accelerators.

Our continued ambitions are reflected in the AMD goal of a 30x increase by 2025 in energy efficiency for AMD processors and accelerators powering servers for high-performance computing and artificial intelligence training. In 2021, AMD achieved a 3.9x increase. Nearly midway through 2022, we are on track toward achieving our goal, having reached a 6.8x improvement in energy efficiency compared to 2020 using an accelerated compute node powered by one 3rd generation AMD EPYC CPU and four AMD Instinct MI250x GPUs.6 Our goal utilizes a measurement methodology validated by renowned compute energy efficiency researcher and author, Dr. Jonathan Koomey.

For more information on environmental sustainability programs and initiatives at AMD, please visit our website.