Do What You Can To Serve Every Day

Do What You Can To Serve Every Day 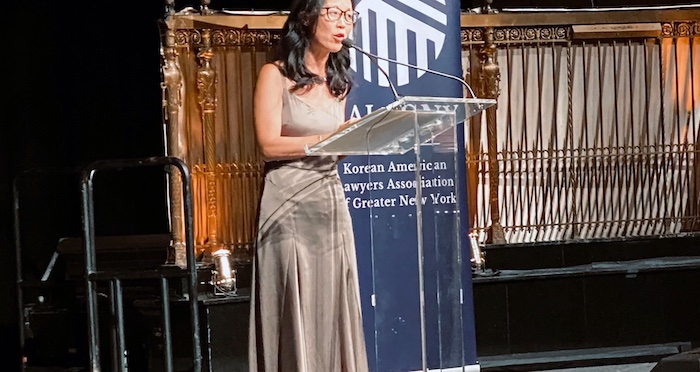 Recently, I was selected as one of the Korean American Lawyers Association of Greater New York’s (KALAGNY) Trailblazer honorees, and I’m incredibly humbled and honored by this recognition. I sit among a group who have done such incredible things, and I’m encouraged by the work that KALAGNY is doing not only to recognize but also support the promotion of Korean American lawyers to positions of leadership in both the private sector and public sector.

I am the child of Korean immigrants who came to the U.S. in the 1970s. My grandfather was a police chief in a small town on Cheju Island off the coast of South Korea. My dad – the oldest of 7 kids – was the only one to leave the island to go to university in Seoul. Even though I never met my grandfather, it was through stories of him that I was influenced at a young age. He was a chief that was known to serve the community with strength and compassion, and this was remembered with admiration and respect. This rooted my first interests in public service. That being said, I was the first to go to law school in my family. Although we didn’t have any lawyers in my family, I was always encouraged to do anything I wanted.

When I received the call asking whether I would be interested in serving as prosecutor, I was doing well in an in-house position, finally getting over that initial learning curve of learning a new company and industry. I had two small kids at the time and was juggling family life and work, as many young families do. So, when I received the call to come work in the public sector again and lead the prosecutor’s office – it wasn’t an easy decision.

But, I knew it would be a tremendous honor to serve, and I would likely never get the opportunity again. I remember being told at the time that if I took the role, I’d be the first Asian American to hold the county prosecutor role in New Jersey. Union County, in particular, never had a person of color or woman serve as county prosecutor. And, frankly, I think that’s what did it. There were two things that drew me back to public service. One was the mission: how great it was to serve every day by doing the right thing. The second was the fact that I wanted my kids to see someone who looked like them in positions of leadership. It was probably one of the best experiences I had in my career. As county prosecutor you can have a significant impact on the community not only in the day-to-day criminal matters that you handle, but you also can make real changes in policy.

Preparing to come into the job, I do remember all the well-intentioned advice that people had for me, among them, how to command presence. Having spent many hours agonizing about how to contort my body to look more like a 6-foot white male – my many predecessors – I ultimately realized that was never going to work for me. Instead, what I quickly learned was I really needed to focus on being the best version of myself. Leadership was about working with others, building relationships and your ability to gain the trust of your internal and external stakeholders.

For those who are young in their career and considering being acting prosecutors in county prosecutor’s or district attorney’s offices, I would highly encourage it. It’s a terrific job. It gives you a ton of responsibility, trial skills, judgment and the ability to serve the public. And, what I think has made me love being a lawyer throughout my career is that mission – serving every day by doing the right thing.

My hope for the Korean American community as well as other communities of color, particularly those who have had the opportunities in law as well as other professional fields, is that despite obstacles, we will step up. We will be engaged in public service, take leadership roles and break into roles that have not yet been filled not only because these positions are tremendously rewarding, engaging and fulfilling, but also because of our commitment to a more diverse face of leadership for the future generations to come.