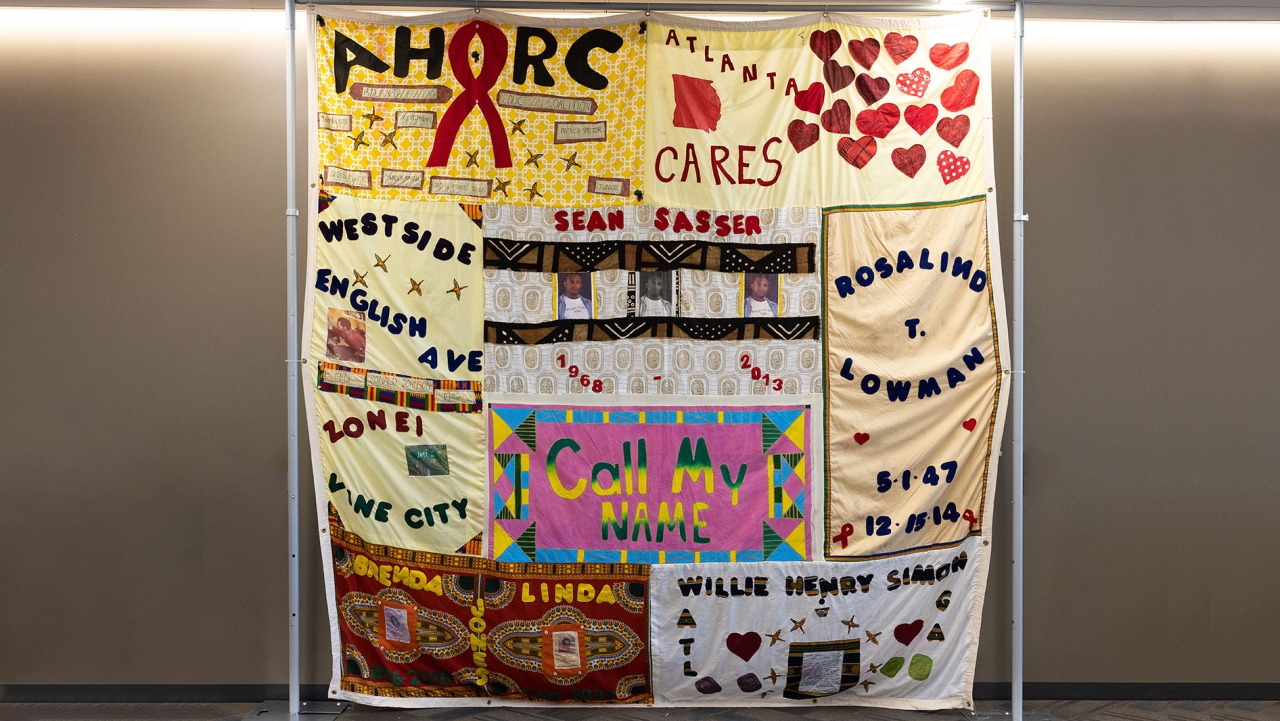 After a journey across the country, two pieces of the AIDS Memorial Quilt have now found their permanent home at Gilead’s Foster City campus.

The exhibit, which is installed outside of the company’s meeting center, contains two 12 feet by 12 feet blocks of the Quilt, each including eight panels. The individual panels commemorate the life of a person who died from AIDS-related causes.

“Every panel of the Quilt tells its own story. There are stories of loss, but also of community, remembrance and legacy,” says Jane Stafford, Executive Director of Public Affairs at Gilead. “We're proud to partner with the National AIDS Memorial to preserve and display the Quilt year round, allowing us to raise awareness for current and future generations about the impact of the HIV epidemic.”

Since 2013, the National AIDS Memorial has run the Call My Name Quilt-making program to draw attention to the impact of the HIV epidemic and the health inequities that affect the Black community. The first display on Gilead’s campus includes one block of panels made in Atlanta, which aligns with the company’s ongoing efforts to combat the spread of HIV, particularly in the Southern United States.

The other block on display includes five panels made by mothers, honoring their sons and daughters who died from HIV. Several of the panels feature balloons and carousels, created in honor of young children who died.

A photo and heartfelt letter accompany one of the panels, created by Lola Lambert in honor of her adult son, Randy Bausal, who died in 1997. “It symbolizes the pain and suffering that he and others endured in their struggle with AIDS,” she wrote in 2000. “It was made not only because of our love for him, but also for his love for us. If my love could have kept him well and safe from harm, he would be here with me today.”

“The Quilt is an incredible testament to the hardship that countless communities have faced and the humanity behind the grief,” says Cleve. “Each quilted panel represents people who were loved, their friends, their families and stories.”

The Quilt has since become the world's largest community art installation, honoring the lives of more than 110,000 people, while also serving as a sign of hope for the future. It includes many letters and photos that tell their stories.

Earlier this month, Gilead partnered with the National AIDS Memorial to display 3,000 panels of the Quilt in San Francisco’s Golden Gate Park. In 2020, this partnership supported the move of more than 50,000 individual memorial panels of The Quilt from Atlanta, where it was based for 19 years, to San Francisco for its permanent residency in the city.

“The panels are continuing to change the face of the HIV epidemic and to spotlight social and health inequities,” says John Cunningham, Chief Executive Officer of the National AIDS Memorial. “We’re determined to keep this powerful symbol of hope visible and growing."

This fall, Gilead and the National AIDS Memorial will launch the Quilt Southern Initiative to connect with communities in the U.S. South that have been disproportionately impacted by HIV through the power of art, storytelling and education.

“It’s a powerful reminder of the personal impact of the HIV epidemic and a call out that our work here is not done,” says Jared Baeten, Gilead's Vice President of HIV Clinical Development. “The Quilt will hopefully help bring us closer to our goal of ending the epidemic for everyone, everywhere.”