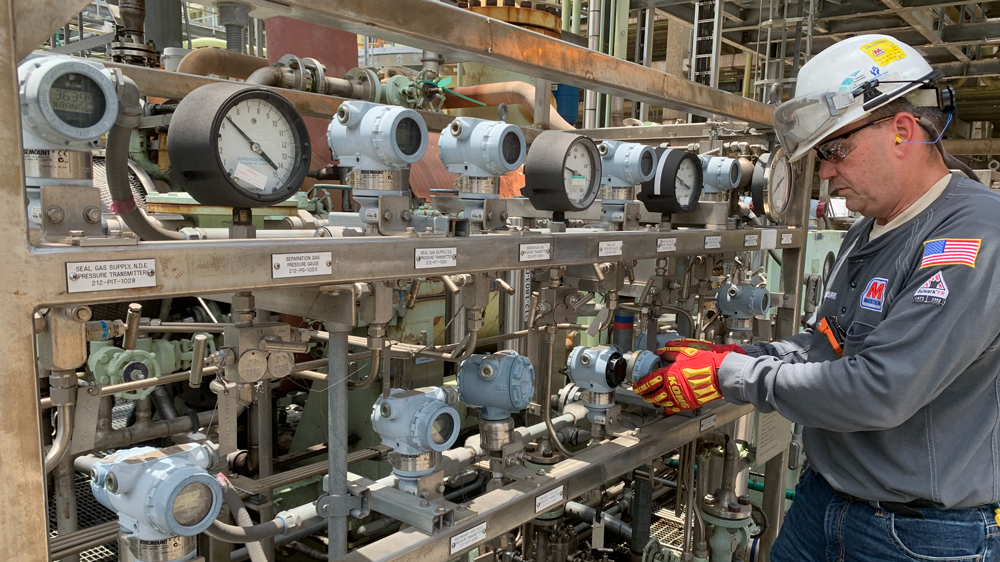 Lieutenant Colonel Daren Burns was named Commander of the 214th Engineering Installation Squadron (EIS) for the Louisiana Air National Guard after 30 years of continuous service as a non-commissioned officer and as a commissioned officer.

Burns is an Instrument and Safety Instrumented System subject matter expert for Marathon Petroleum based at the company’s Garyville refinery. Prior to this role, Burns worked in different capacities at the Garyville refinery, including project engineer and maintenance reliability engineer. He’s been with the company for more than 14 years.

“Marathon is very supportive of my work with the Louisiana Air National Guard,” said Burns. “My leaders have never given me any issues with having to leave for military duty.  They only give encouragement.”

Burns recalls being concerned about needing to take a six-week class with the Guard, just as he was taking on a new position within the Maintenance Department at the refinery. He talked to his immediate supervisor, Paul Hansen, and was reassured there were no issues but that he would inform the refinery maintenance manager at the time, Rich Hernandez. Burns says Hernandez made it very clear how the company felt about his duty to the Guard.

“He told me ‘We are honored to have you as a part of our team. It’s fine to take this class. The job will be here when you get back,’” said Burns. “That really stood out to me. The company has always been fully supportive.”

Burns spends one weekend a month training with his unit with the Guard. As unit commander, he is responsible for ensuring that engineering services are provided for the enhancement of deployed tactical cyber communications equipment for command and control of Air Force Cyber assets, which requires him to take off work an additional Friday each month to prepare. When the unit is activated to respond to a local disaster, it could mean he’s gone from the refinery for weeks at a time.

“During Hurricane Ida, we were called to set up communications equipment in St. John the Baptist Parish, so that agencies like the fire department, police department and the Emergency Operations Center could communicate in the affected areas,” said Burns. “It’s a lot of work, but it was needed to support the community during a time of crisis. Community service was always important in my family.”

Burns’ father was a Navy veteran and worked in law enforcement for 50 years. His father attended Burns’ graduation and ceremony when he was commissioned as an officer with the Louisiana National Guard in 2006.

“When I was commissioned 16 years ago, I set a goal to retire as a Lieutenant Colonel with a command,” said Burns. “I wish my dad was here to see to me achieve my goal. He would be very proud of me. My family is very proud of what I do.”

Burns is also the co-chair of Marathon Petroleum’s Veterans employee network chapter in Garyville, an inclusion group that connects military members, veterans and supporters of the military. Burns and other leaders at the refinery want to make sure people feel included and valued at work every day.

“We have a very strong veteran employee network that does a great job engaging the workforce and being a support structure for others,” said Justin Lawrence, Human Resources Manager at the Garyville refinery. “Our employees who are members of the military or veterans bring great value to our organization. They are usually self-starters and bring structure, discipline and strong leadership skills to the table. We want to make sure they feel comfortable continuing their military duty while working for Marathon Petroleum.”

Burns said he is excited about this next chapter with the Guard and hopes to encourage others, including servicemembers and civilians, not to give up on their dreams.

Marathon Petroleum offers Military Leave to eligible employees that provides up to 24 months of Company pay, minus military base pay, and continued eligibility to participate in many Company benefit plans. Re-employment eligibility is extended for leaves not exceeding five years, and the period of leave is credited as Company service when you return to work for the Company within the required time period following your discharge from military service.