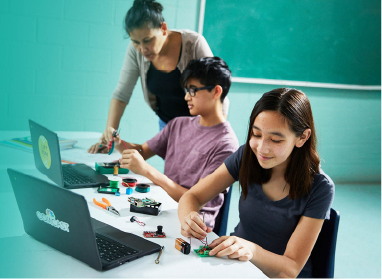 At Comcast NBCUniversal, we believe that everyone should have the opportunities and resources they need to build a future of unlimited possibilities. In a year marked by both ongoing challenges and encouraging signs of progress, we deepened and accelerated our efforts to create a better, more equitable world. We also launched Project UP, our comprehensive initiative to advance digital equity that is backed by a $1 billion commitment to reach tens of millions of people through programs and community partnerships that connect people to the Internet, advance economic mobility, and open doors for the next generation of innovators, entrepreneurs, storytellers, and creators.

Our long-standing commitment was recently recognized by Points of Light, the world’s largest organization dedicated to volunteer service, which named Comcast NBCUniversal to their annual Civic 50 list for the ninth consecutive year. The Civic 50 represents companies who are setting the standards for civic leadership and building the culture for sustained solutions to community problems.

“As a company, we remain deeply committed to helping create transformational change so that everyone – in every community – has a chance to realize their dreams,” said Dalila Wilson-Scott, Executive Vice President and Chief Diversity Officer, Comcast Corporation.

It is an incredible honor to once again be recognized by Points of Light’s Civic 50 for the work that our people and partners do in communities every day.
DALILA WILSON-SCOTT, Executive Vice President and Chief Diversity Officer, Comcast Corporation

Stories of how we are leveraging our unique expertise as a media and technology company to create substantive change within our communities can be found in our recently released 2022 Comcast NBCUniversal Impact Report.

The report includes stories of impact and data highlighting our most notable initiatives and investments, ranging from employees who volunteered as mentors for underrepresented students to our community partners working to equip more people with the training and digital skills for the jobs of today and tomorrow to Comcast RISE, which provides small businesses with monetary, technology, and marketing grants.

The Civic 50 is an initiative of Points of Light designed to identify and honor the 50 most community-minded companies in the United States as determined by an annual survey administered by True Impact. Since it was launched in 2012, The Civic 50 has served as benchmarking tool and platform for sharing best practices in the corporate citizenship sector.