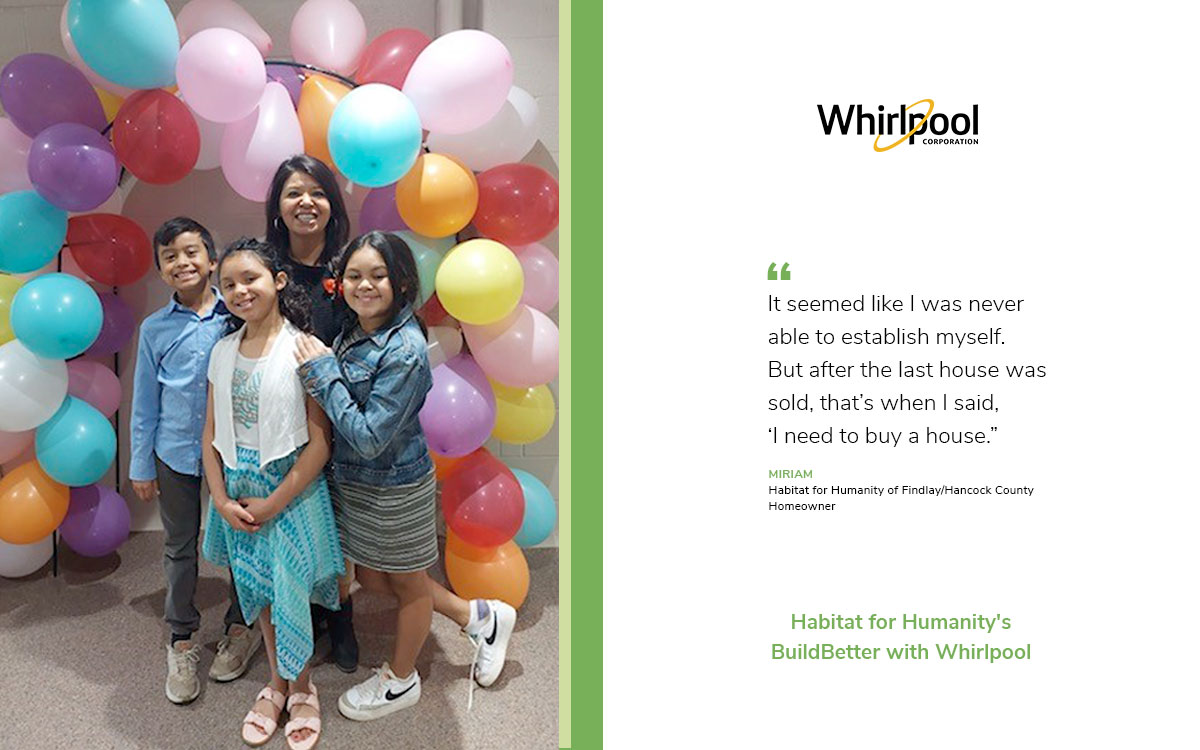 Miriam couldn’t believe that it had happened again. The house she was renting was sold by the landlord without her knowledge. This was the second time a landlord had sold a house out from under her, uprooting Miriam and her three children: 11-year-old Reina and 9-year-old twins Romeo and Raelyn. “It seemed like I was never able to establish myself,” Miriam says. “But after the last house was sold, that’s when I said, ‘I need to buy a house.’”

Miriam’s sister had been telling her that she should apply to Habitat for Humanity, but Miriam always felt she could make it on her own, even though she was living “paycheck to paycheck.” However, once Miriam heeded her sister’s advice, she applied to Habitat for Humanity of Findlay/Hancock County’s homeownership program in 2019 and was approved. Miriam and her family moved into her new home in November 2021.

Homeownership has made a big difference in the family’s lives. “This is our house,” Miriam says. “We love it and we’re not moving anymore. I don’t have to worry about someone selling the house. It’s a great feeling.”

The family’s new home was built as part of Habitat for Humanity’s BuildBetter with Whirlpool initiative, an expansion of Habitat’s existing BuildBetter initiative that will build more than 250 climate-resilient and energy-efficient homes to help hundreds of families in need of affordable housing over the next three years.

The family’s new three-bedroom home has a tankless hot water system and 2-by-6 stud walls for additional insulation to help lower heating and cooling costs. To improve indoor air quality by removing moisture, odors, and pollutants, the home is air-sealed, insulated, and includes a continuously running exhaust fan in the bathroom. Since Findlay, Ohio is in a high-wind area, the new house has a fortified roof system with taped zip-panel roofing and high-wind-rated shingles. The family also received an energy-efficient refrigerator and range, which Whirlpool Corporation donates to every Habitat-built home in North America. Miriam’s family was also gifted a Whirlpool brand dishwasher.

“I tell the kids the appliances are so pretty, let’s keep them pretty,” Miriam says, laughing. “Let’s keep this new look going.”

Miriam is grateful that she listened to her sister and now has a clear understanding of how Habitat, together with Whirlpool Corp., transforms lives by helping families build and improve places to call home.