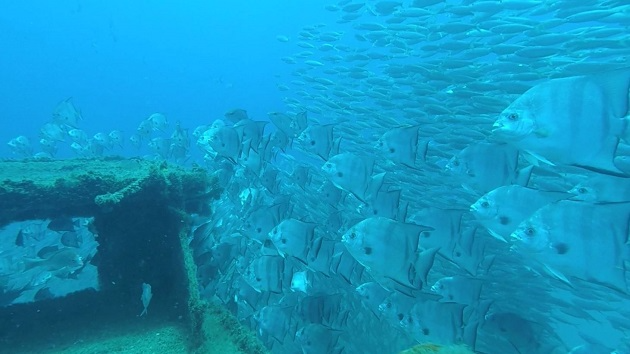 They all live among the 1,650-acre Rio Grande Valley Reef, the largest and most complex artificial reef off the coast of Texas.

And in the future, carbon could find a home here, too.

The artificial reef, an existing collaboration between Friends of RGV Reef and the Edinburg, TX-based University of Texas Rio Grande Valley (UTRGV), has made significant strides in restoring red snapper and other sea life populations in the Gulf of Mexico since it was established in 2015.

“We are embarking on another important mission—this one to see if what we’re doing here in the waters of the Gulf of Mexico could one day directly benefit all Texans on land, and even lead to a better world for all people,” notes Friends of RGV Reef president Gary Glick.

“The research we are conducting here will fill important gaps in our knowledge regarding carbon sequestration in the marine environment, and will be the first of its kind in Texas,” says Richard Kline, Ph.D., professor at the UTRGV’s School of Earth, Environmental and Marine Sciences. “It’s suspected that artificial reefs can hold a substantial amount of carbon biomass, but like detectives, we’ll analyze the data to find out if that’s really the case.”

Sustainability is at the heart of everything we do at Enbridge, and through exploration of new energy technologies like carbon capture and storage, clean hydrogen and renewable natural gas (RNG), we’re helping to build society’s bridge to a cleaner energy future.

A $250,000 Fueling Futures grant from Enbridge to Friends of RGV Reef is funding this study, which will include collecting samples from the reef and marine life to advance carbon sequestration research. It’s believed reefs, both natural and man-made, capture and store carbon—an act of carbon sequestration—and can assist in the effort to reduce greenhouse gas emissions such as carbon dioxide (CO2).

“We’re pleased to continue our partnership with Friends of RGV Reef, supporting work that is enhancing biodiversity and marine life in the Gulf while at the same time exploring the possible climate benefits associated with the reef,” says Pete Sheffield, Enbridge’s Chief Sustainability Officer. “This type of innovative research offers great potential in the race to reduce the world’s carbon footprint.”

The majority of the artificial reef is built out of intentionally sunken vessels, concrete rail ties and cinder blocks. In 2018, Enbridge made a $350,000 investment that was responsible for advancing the reef to industrial scale.

“This new study will thoroughly examine the reef biomass to quantify how much carbon is there, its weight, and the amount of carbon that’s been captured or sequestered. It’s truly exciting to believe this underwater project, which has already provided substantial habitat for reef fishes, could also be beneficial in reducing the carbon footprint of humans,” says Dr. Kline.

Dr. Kline has been conducting research on artificial reefs for more than 20 years and will lead scientific research in partnership with Friends of RGV Reef. During the study, it’s anticipated that local schools and community groups will participate in workshops that will allow for firsthand learning from scientists conducting this groundbreaking research.

The RGV Reef is designed to accommodate the very first industrial-scale reef fish nursery in the Gulf, and perhaps the world. A consortium that included UTRGV, A&M Galveston and the Harte Research Institute estimated that the reef carried 240,000 red snapper from juveniles to adulthood from 2017 through 2019—and in the winter of 2020, Glick’s group doubled the size of its nursery reef.

“We encourage all Texans to come out, learn and support this important work in the Gulf of Mexico. This is your backyard laboratory that we hope will produce a more sustainable environment for people now and generations to come,” said Glick.

“The waters of the Gulf and the land are inextricably linked. The RGV Reef project is demonstrating we can help restore marine life—we’re still building the reef and need your help—and this project may also show that reefs can make an impact on the climate and help reduce the amount of greenhouse gases we produce. That’s a pretty awesome result.”