Why You Should Care About Pronouns at Work

Being yourself and being allied begins with thoughtful communication.

Why You Should Care About Pronouns at Work

Being yourself and being allied begins with thoughtful communication. 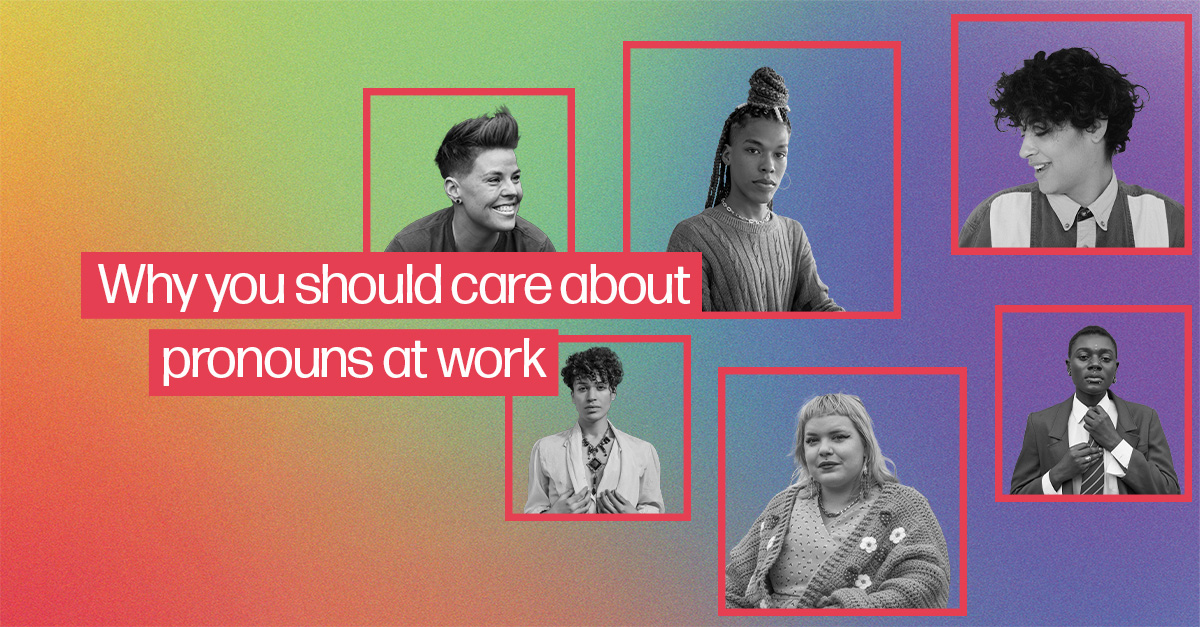 The once-overlooked pronoun has earned an essential role in the professional world.

Their usage has gained increased attention as workplaces, and society, turns a spotlight on greater inclusion. “They” earned the honor of Merriam-Webster’s 2019 Word of the Year as lookups for the term soared.

For many in the LGBTQ+ community, the ability to easily self-identify is liberating. For allies, sharing pronouns is a public way to show support. For those who don’t understand the purpose — or feel uncomfortable using non-gendered pronouns — it can be confusing, even frustrating.

Those varying stances are to be expected, say diversity experts and advocates.

“We are in uncharted territory,” says India Martin, CEO and founder of the coaching and consulting firm Leadership For Execs. And despite the nuanced conversations, one thing is certain: “Every person has the right to identify themselves as they’d like,” she says. “It’s about respecting each other’s humanity.”

Sharing personal pronouns, and using the correct pronouns for colleagues, can have far-ranging benefits. It can reduce gender-based assumptions and foster a greater sense of belonging among employees. It can also help companies recruit and retain staff in a diverse workforce where a broad mix of people from a spectrum of ethnicities and genders work together amid five different generations.

Across the US, about one in 14 people self-identify as lesbian, gay, bisexual, transgender, or something other than heterosexual, according to Gallup research. Roughly one in five Gen Zers who have reaced adulthood— those just entering the workforce — identify as LGBT. In addition, 42% of US adults say they know someone who is transgender, and 26% know someone who goes by a gender-neutral pronoun, according to Pew Research Center.

An inclusive environment enables individuals to thrive while also bolstering a company’s bottom line, says Gearah Goldstein, a co-founder of The GenderCool Project, a nonprofit organization that strives to create welcoming workplaces.

“Diversity truly adds to better performance across every metric,” she says.

So, how do we get to a place where diversity is fully accepted, and employees understand the advantages of using, and honoring, appropriate pronouns? “Have an open conversation about it,” Goldstein says.

To help get the discussions started, below are some common questions and expert feedback. As with many other workplace topics, protocol will continue to evolve, so your best bet is to maintain an ongoing dialog in this area.

Pronoun use is unfamiliar territory for me. How can I learn?

In many cases, colleagues who openly share their pronouns will be willing to talk about their knowledge and experiences in this area. But before you reach out, do some online research to get a baseline understanding, says Goldstein. You can start by checking out HP’s helpful document on including pronouns in email signatures and the pronoun guide from the nonprofit Out & Equal Workplace Advocates. There are many online tutorials as well, such as the LinkedIn Learning course on Strategies to Foster Inclusive Language at Work.

As a manager, what should I do?

Exhibit inclusive behavior, such as using the correct pronouns for others and being transparent about your pronouns. Also, let your team know you’re open to all suggestions and feedback, advises Goldstein.

For example, you could say: “I put pronouns in my email signature because I want to show allyship. Please let me know if there’s anything else I can do to foster conversations around this topic.”

Keep in mind that some people may not want to put forth their pronouns for varying personal reasons. “We shouldn’t judge others for not using pronouns,” says Goldstein.

What’s the protocol if I don’t know someone’s pronoun?

Share your pronoun, then invite your colleague to share theirs. For instance, you can say, “Hi, I’m Taylor from the marketing department. My pronouns are they, them, theirs. How should I refer to you?” Never push for someone to share a pronoun if they don’t do so.

If you’re in a setting where you’re unable to inquire about a pronoun — such as a large meeting — use the person’s first name when referring to them, says Martin.

What should I say if someone tells me I got their pronoun wrong?

“‘Thank you’ is the best response,” says Goldstein. “It shows an intent of positivity and implies that you are trying to do better.”

A quick apology is also good, she says. “Long apologies and discussion can sometimes feel awkward for everyone.”

My manager keeps referring to me incorrectly. How do I let them know I’m a they?

Gently correct them without making it combative, counsels Martin. “You’ve decided on your pronoun, but that doesn’t mean everyone knows it,” she says. “We have to grant people grace. Most people have good intentions.”

How can I be an ally?

An easy way to show solidarity, and normalize the use of pronouns, is to add pronouns to your email signature. “By sharing my pronouns, I create a safe place for other people to share their pronouns,” says Annette Friskopp, global head and general manager, HP’s PageWide Industrial business, a board member at Out & Equal, and co-executive sponsor of HP’s Global Pride Business Impact Network (BIN). HP’s Global Pride BIN, a volunteer community of employees that has 17 local Pride chapters across the world, focuses on LGBTQ+ employees and topics and works to amplify the voices of LGBTQ+ staffers.

You can also help inform others by linking to a site that explains the benefits of sharing pronouns. Friskopp’s email signature says, “What’s this?” after her listed pronouns of “she/her/hers'' and links to the Out & Equal pronoun guide.

Finally, be curious in a courteous manner. For instance, when approaching a colleague to learn more about their pronoun, provide some context, counsels Martin. If someone has a pronoun you haven’t seen before, explain that you want to be an ally and use their preferred term correctly.

Whether you’re a proponent of pronoun use — or perhaps just new to it — the key to allyship remains the same. It’s “to respect people for whatever their preference for themselves might be,” says Martin.