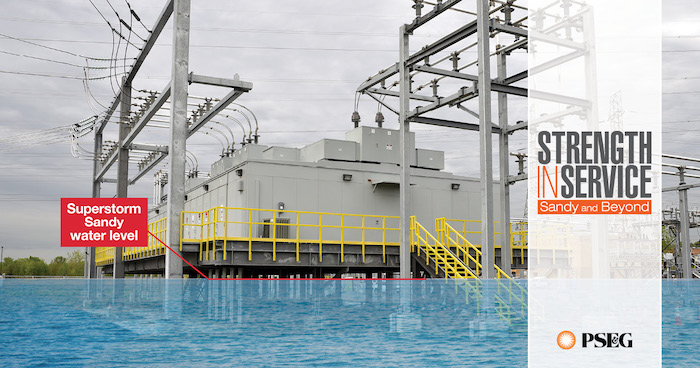 NEWARK, N.J., June 10, 2022 /CSRwire/ - Public Service Electric and Gas, New Jersey’s largest utility, is well prepared to support customers and the state for what experts say could be another very active hurricane season. Ten years after Superstorm Sandy raged across the East Coast, PSE&G continues to protect customers’ utility service from the damaging impact of extreme weather by strengthening and upgrading its infrastructure. This work contributed to PSE&G customers experiencing fewer outages and the utility achieving strong reliability performances for 2021, one of the best in the last 10 years.*

The $4.8 billion investment in infrastructure strengthening and modernization programs, portions of which are still in progress, spans PSE&G programs Energy Strong I and II and Gas System Modernization Program I and II and includes raising, rebuilding, eliminating and equipment upgrades at 26 stations, many of which were damaged by flooding during Sandy. PSE&G also installed smart grid technologies, replaced close to 2,000 miles of aging gas lines and added digital and other technologies to make the network more intelligent and agile.

PSE&G has received the Mid-Atlantic ReliabilityOne award from PA Consulting for 20 consecutive years, additional evidence that our efforts to strengthen our electric system is benefiting customers.

The benefit to customers was evident last year when Tropical Storm Ida brought historic flooding to most of the utility’s service territory. Tropical Storm Ida and its remnants would cause more than $75 billion in damage nationwide – surpassing the damage caused by Superstorm Sandy in 2012. PSE&G’s infrastructure stood strong. A total of 215,000 customers lost power compared to more than 2 million who suffered lengthy outages during Sandy. By replacing and modernizing low-pressure cast iron gas mains in or near flood areas, we protected 90,000 customers from risk of losing gas service due to flooding.

“During Superstorm Sandy, I was one of the South Hoboken Commanders for the Hoboken Police Department. The western half of the city was under at least 6 feet of water, which included the PSE&G Marshall Street Substation and our entire city was without power for a week, creating dangerous situations for every resident and every first responder,” said Kenneth Ferrante, Director of Public Safety for the City of Hoboken. Over the past ten years, as OEM coordinator, police chief and now public safety director for Hoboken, I have witnessed PSE&G’s critical commitment to improving infrastructure. From working with the city to relocate and elevate our main substation out of the flood zone to integrating upgraded cables and stronger poles, PSE&G has been an invaluable partner in making our community safer and more resilient. PSE&G’s commitment to working with our city government brought Hoboken to a place where there was not one power outage during either Ida or Hurricane Henri. When major storms bring little negative impact, residents stay safe and get back to their normal routines much sooner.”

PSE&G has upgraded lines and installed more redundant circuits so that if a portion of a line gets damaged, we can prevent an outage by using another electrical pathway. These improvements and upgrades allow power to be restored quicker, especially for critical facili­ties. In the areas served by new infrastructure, critical facilities like hospitals, water treatment plants and other essential providers of health and safety services, had their outage times dramatically reduced.

“We’re expecting this hurricane season to be another busy, potentially dangerous one with more major storms, so we urge customers to make plans and prepare now,” said Kim Hanemann, PSE&G president and chief operating officer. “The work we began a decade ago is paying off – fewer customers are experiencing outages and when they do occur, we can restore power more quickly. Continuing these investments to protect our customers from ex­treme weather is fundamental to our Powering Progress vision of a future where people use less energy, and it’s cleaner, safer and delivered more reliably than ever.”

HOW YOU CAN PREPARE

PSE&G customers can prepare for the upcoming season by:

* As measured by the average number of customers who experienced outages lasting for more than five minutes in 2021 – a key reliability metric in the electric utility industry.

Public Service Electric & Gas Co. is New Jersey’s oldest and largest gas and electric delivery public utility, serving three-quarters of the state’s population, as well as one of the nation’s largest utilities. PSE&G has won the ReliabilityOne Award for superior electric system reliability in the Mid-Atlantic region for 20 consecutive years. PSE&G received the 2022 ENERGY STAR® “Partner of the Year” award in the Energy Efficiency Program Delivery category, and is a 2021 Customer Champion and Most Trusted Brand as named by Escalent. PSE&G is a subsidiary of Public Service Enterprise Group Inc., (PSEG) (NYSE:PEG), a predominantly regulated infrastructure company focused on a clean energy future and has been named to the Dow Jones Sustainability Index for North America for 14 consecutive years (www.pseg.com).