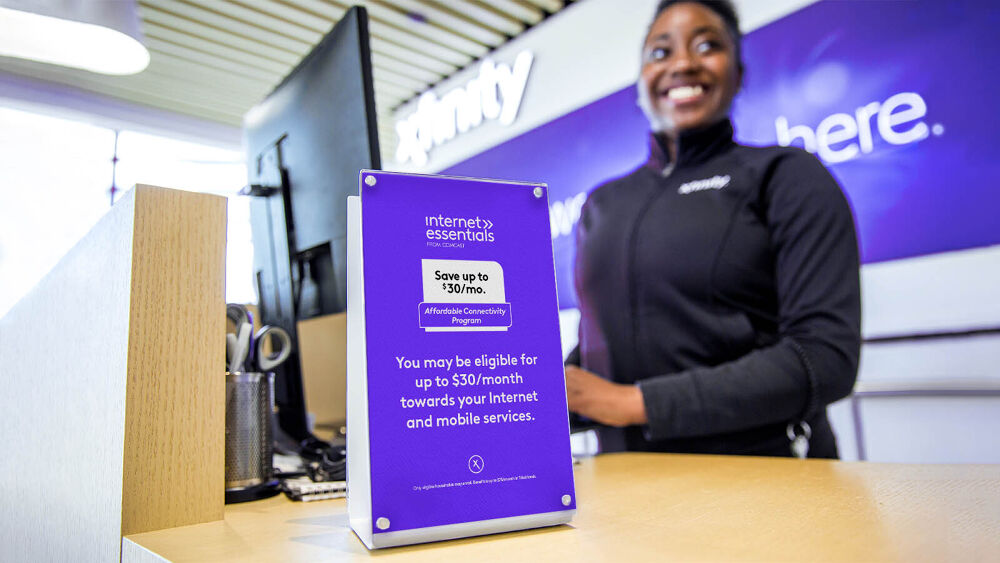 As the one-year anniversary of the Affordable Connectivity Program (ACP), and its predecessor the Emergency Broadband Benefit (EBB), approaches, Comcast today announced new developments in its efforts to increase awareness and help people take advantage of the life-changing program that provides $30 each month toward their connectivity needs.

People will soon be able to visit 500+ Xfinity Stores nationwide to sign up for Internet Essentials Plus, a service that includes 100 Mbps speed, a cable modem, access to millions of WiFi hotspots, and unlimited data for $29.95 per month. During their visit, customers can also learn more about how to enroll in ACP to get Internet service for free. Comcast is also equipping tens of thousands of call center representatives to help customers sign up for Internet Essentials Plus and educate about ACP. Any Xfinity customer across all Comcast’s markets who qualifies for ACP can apply their $30 credit toward their monthly Internet and/or Xfinity Mobile bill.

In addition, through Project UP, Comcast’s $1B commitment to advance digital equity and help build a future of unlimited possibilities, the company is partnering with its network of thousands of non-profit organizations in communities across the country to increase awareness of, and participation in ACP, while also addressing broadband adoption issues like the lack of digital skills. In the last six months, Comcast has distributed well over $1 million dollars in grants to support dozens of local non-profits affiliated with the Hispanic Federation and the National Urban Indian Family Coalition (NUIFC), as well organizations such as NPower, with plans to invest millions more throughout the year.

In addition to retail, customers can visit www.xfinity.com/acp, www.internetessentials.com, or call 844-389-4681 for more information, to determine eligibility, and sign up. A dedicated ACP Enrollment and Support Center is available from 8AM to 12AM daily, with multi-lingual capabilities to assist anyone interested in the program.

Internet Essentials is the nation’s largest and most successful private-sector low-income broadband adoption program. For more than a decade, Comcast has worked with trusted community partners, businesses, and government to help millions of low-income households connect to the Internet and the technology they need to participate in the digital world. Since launching in 2011, Internet Essentials has connected a cumulative total of more than 10 million people to the Internet at home, most for the very first time.

Comcast has been committed to connecting people to the Internet and the technology and skills they need to participate and excel in an increasingly digital world for over a decade. Looking toward the next ten years, Comcast is building on that foundation and expanding its impact through Project UP, a comprehensive initiative to advance digital equity and help build a future of unlimited possibilities. Backed by a $1 billion commitment to reach tens of millions of people, Project UP encompasses the programs and community partnerships across Comcast, NBCUniversal, and Sky that connect people to the Internet, advance economic mobility, and open doors for the next generation of innovators, entrepreneurs, storytellers, and creators. For more information on Project UP and the latest news about Comcast’s ongoing efforts to advance digital equity visit https://corporate.comcast.com/impact/project-up.