California Love: Tom Tran's Passion for Coaching and His Community Is Making a Difference in the Golden State

In the span of two weeks, Tom, an assistant store manager, helped guide a team to a state title and was named a Jr. NBA Coach of the Year honoree by the Sacramento Kings.

California Love: Tom Tran's Passion for Coaching and His Community Is Making a Difference in the Golden State

In the span of two weeks, Tom, an assistant store manager, helped guide a team to a state title and was named a Jr. NBA Coach of the Year honoree by the Sacramento Kings. 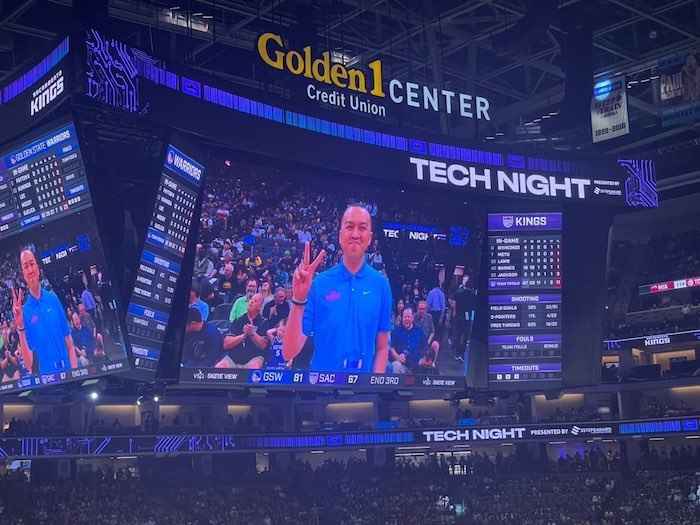 Tom Tran was recently named the Sacramento Kings’ honoree for the Jr. NBA Coach of the Year award. Just a few weeks before that, he helped guide the Sierra College women’s basketball team to the California state title. His nonprofit AAU basketball program NorCal Dynasty continues to grow and attract both boys and girls to the winning program.

Not bad for a guy who was cut from his middle school basketball team.

After rebounding from that tough experience, Tom, 37 and an assistant store manager for DICK’S Sporting Goods, is hitting his stride with no sign of slowing down. To put it in basketball terms, he’s on quite a run.

That pivotal moment instilled in Tom a philosophy of moving forward and getting better in a positive way – he said the coaches when he was trying out were hard on the players, even demeaning. Not wanting to be the guy that's on the sideline yelling and screaming for four quarters, Tom has challenged himself to take a more laid-back approach and build on the positives that help players reach their potential.

“I tell my kids that you can learn from anything,” said Tom, who continued to play rec league basketball and with friends throughout his youth. “I had a bad experience and I turned it into a positive.”

For him, coaching is about helping players reach new heights and keep their passion for the sport going, whether that’s as a leading scorer or role player providing key minutes off the bench. Each player, he said, has been pivotal to any success he has had as a coach.

“These awards go to all my players who made this possible. I wouldn’t be the person or coach I am today if it wasn’t for them,” said Tom.

Tom’s coaching career began in a rec league in Rocklin, California. He was 15 years old and had an opportunity to play in the league for free if he coached a team of fourth graders who needed a leader.

“I just had a great experience with the kids, and it went on from there,” he said.

A RUN FOR THE AGES

The game that kick-started Tom’s amazing run was the March 15 California State Junior College championship game between Sierra College, where Tom is an assistant coach, and San Joaquin Delta College. The sophomores at the two-year school were 0-5 against San Joaquin Delta in their careers and had lost by 38 the previous meeting. The players, many of whom came back for another year because of time missed due to the pandemic shutdown, got their first win when it mattered most and rallied for an incredible 76-71 triumph. A few weeks later, on April 1, Tom received a text from a number he didn’t recognize. He thought it was an April Fool’s Day prank by one of his buddies. He even responded, “Is this a joke?”

He was being alerted by the Sacramento Kings NBA organization that he was selected as their 2022 Jr. NBA Coach of the Year award nominee. He was honored for his work coaching the NorCal Dynasty AAU boys and girls on the court during the Kings’ April 3 game against the Warriors. We are so proud of Tom Tran,” said Don Germano, executive vice president of stores. “His commitment to coaching basketball and helping people to achieve their dreams is an inspiration to all of us at DICK’S Sporting Goods."

Marv Martinez, regional vice president of west coast operations, added, “Tom has so much love for the game and his love for coaching and helping athletes truly comes to life in everything he does, day in and day out. We’re so proud of Tom and his accomplishments both on and off the court.”

At first, Tom was speechless after the run that resulted in a state championship and national recognition. After it all sank in, Tom came back to his humble beginning and the lessons it taught him and continues to teach his players.

“My philosophy has always been growth and life lessons,” said Tom. “They might not make the pros or play in college, but there's many life lessons you'll use as an adult. You’re going to win and lose games. It’s what you take from it that matters.”

TIME TO KICK IT

The phrase “coaching style” has more than one meaning to Tom. When coaches returned to the sidelines after the pandemic shutdowns, many opted for more laid-back looks, like quarter-zips and sneakers. Tom is all for it. He's a huge sneakerhead with about 500 pairs and has a closet designated just for his footwear. He’s even got a reputation in the leagues he coaches as a trendsetter in his Jordan 1s and 11s – coaches and opposing players are just as likely to study his style as his team’s game film. In addition to all those shoes, his career is another perfect fit. Tom works at the DICK’S store in Sacramento. He’s been in the footwear game for nearly 15 years. That experience combined with his passion makes Tom an expert at his store and a hit with athletes looking for the kind of shoes that will elevate their game.

When he’s not coaching, Tom, who recently got engaged and is planning a wedding for June, rallies his players for toy drives and shoe donations. Coaching Xs and Os is important, but so is showing his players how to handle themselves off the court.

“I’m a firm believer in the youth as our future,” said Tom. “I want them to see that there’s a bigger picture and, most of all, believe that you can do anything.”

Interested in joining a winning team that supports you in your professional and personal growth? Explore the possibilities at https://www.dickssportinggoods.jobs/.