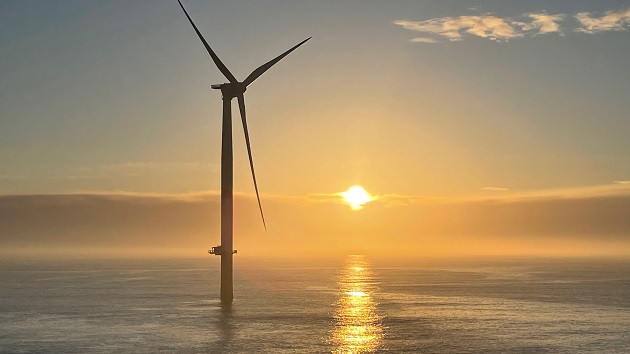 France has some 20,000 kilometres of coastline, and control over an estimated 11 million square km of territorial waters.

And as a potential offshore wind powerhouse, the country took a very important step this week.

The first turbine at the Saint-Nazaire Offshore Wind Project has been installed, a key milestone in the construction of Enbridge’s first wind farm in France—which also happens to be the first offshore turbine installed in French waters.

The 480-megawatt (MW) wind farm, located about 12 km off the west coast of France, is slated to enter commercial operation in late 2022.

"We are excited the first turbine has been installed at the Saint Nazaire Offshore Wind Farm. This is not only a key milestone for our project—it’s also the first turbine installed in French waters, marking an important moment for France’s growing offshore wind industry,” says Matthew Akman, Enbridge’s Senior Vice President of Strategy, Power and New Energy Technologies.

The project’s 80 wind turbines, with an installed capacity of 6 MW each, will be gradually installed offshore by the end of the summer and will start producing the equivalent of 20% of the total annual electricity consumption of the Loire-Atlantique region.

“Today’s announcement signifies the progress we’ve made over the past several years on Saint-Nazaire, working closely with our partners EDF Renewables and CPP Investments,” says Akman. “It also signifies the advancement of Enbridge’s renewable power projects that support the transition to a lower-carbon economy and are aligned with our low-risk investment approach.”