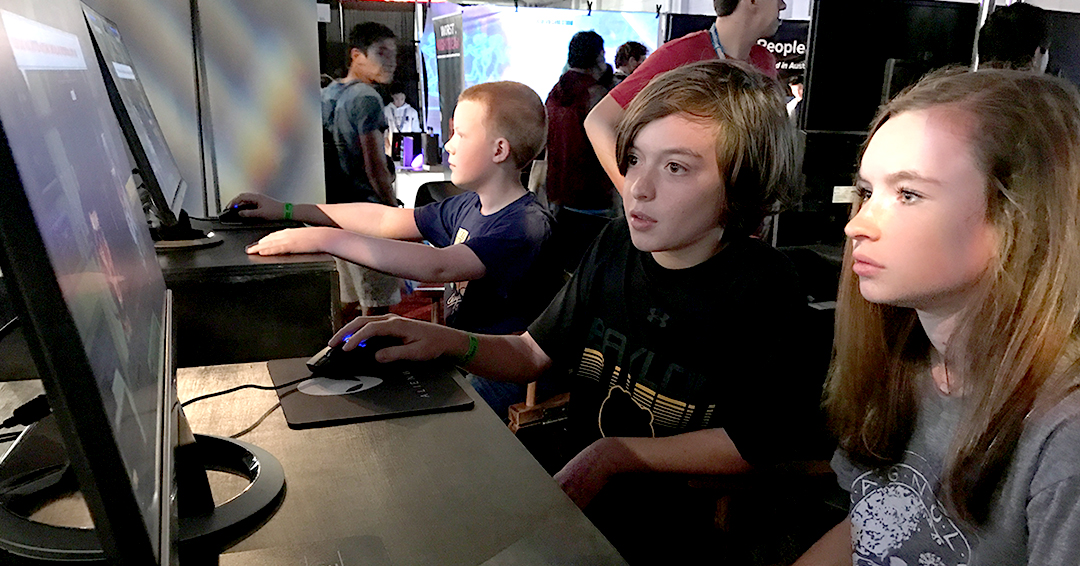 This blog comes to us from Shae Williams, a former software executive with IBM, who cofounded a nonprofit Coalition of Parents in Esports (COPE) in 2020 to assist parents and their children to get the most from their online gaming experiences. COPE is a 501c3 nonprofit empowering youth, parents, educators, and community leaders to use the gaming metaverse to build confidence, curiosity, community, and careers through programs and scholarships. She will speak at an upcoming Women Rock-IT event on April 28, 2022.

To hear more from Shae, click here to register.

Before you roll your eyes at the title of this blog, understand I am also a parent concerned about the effects of screen time on my children’s development and education. Like any dedicated soccer mom, I ensured my kids were physically active in a myriad of sports. Yet when we got to the car or home, there was a recurring constant: screens. The media told me to limit that time, but I was an exhausted working mom, and that digital babysitter was a welcome respite. I felt the requisite parental guilt, but I also saw them having fun, connecting socially, and dare I say it, learning.

As an IT professional who pursued computer science based on my own love of early video games like Galaga, Hitchhiker’s Guide to the Galaxy, and Doom, technology was part of their childhood. Until the age of 13, all screen time was in a central area of the house where their online activity could be safely monitored and advised.

As a family, we built in Minecraft, lost every Mario Kart race to my daughter, and realized our son was exceptionally mentally and physically skilled at competitive gaming. He excelled at a game that required the mental dexterity of speed chess combined with motions my fingers would never master. Soon, he was planning out practice times with his teammates and friends and working on skills such as aim training and strategy. He was learning communication skills in our digitally connected world by 13 that stretched around the world through Discord, Twitch, and Twitter.

When my son Devin aka “Duster” was 14, his love of video games took an unexpected turn. He developed an interest in the technology as he optimized his PC, built discord servers for friends, and wondered about the tech behind the networks and servers that linked him to others. He was learning business skills and budgeting as he negotiated graphics for his marketing. He was learning public speaking as he streamed live on Twitch and editing as he created videos. As a mom, I became less apprehensive the more I watched, listened, and learned from my son. I realized he had formed incredible relationships with teens around the world who were mentors and friends. I also witnessed my son learning all the same teamwork skills from football and building his confidence. I even learned that passion in winning or losing a video game is no different than any sport, and that passion creates great teachable moments for kids and parents alike. Soon I found myself wholeheartedly supporting his passions, despite the negativity from others, as I realized they were not seeing this world for what it really was.

I had a unique perspective of the value of esports through his success, but I also saw thousands of other kids online with the opportunity to be inspired by gaming to build confidence, find their career interests, and to identify with like-minded individuals. The only thing that was lacking was the enthusiastic cheering section of parents applauding their efforts, consoling their defeats, and encouraging the valuable lessons, just like any sport. The media has spent 30 years telling parents that games make kids anti-social and violent. Reputable studies have debunked all these myths, yet the fear remains. Parents are criticized and guilted for allowing our kids to game. Relationships between parent and child are strained as they battle over time spent at a console or PC. Kids feel misunderstood, and the digital divide between parents and gamers widens.

Prior to lockdown, COPE Co-Founder and CEO, Chris Spikoski, noticed that when he was at esports conventions with his son, “Sceptic,” who was there to sign autographs, something interesting started to happen. Parents were lining up to ask Chris questions, like, “What is esports?” “Can you really have a career here?” And “How do you make sure he gets enough exercise?” I found the same thing happened to me at Dreamhack Anaheim, in February 2020, as parents sought me out to ask me the same questions.

During lockdown many parents of esports pros connected on social media to find community and understanding. We shared our experiences of celebrating successes and consoling defeats, just like any competitive sport. Yet again though gamers and their parents were reaching out to us online and asking us the same questions about how to get their parents to support their esports passions like us. In summer of 2020, we realized there was no organization to support parents and their gamers to get the most out of their esports experiences. We had more experience than most parents, so we decided to unite to make esports more understood and applauded by parents, so their children could pursue their dreams.

Our nonprofit, Coalition of Parents in Esports (COPE), advocates for breaking the unhealthy cycle of treating gaming like a vice, instead of recognizing it as a tool for education and connection. Online gaming today really is more than playing video games in your parent’s basement. Our kids are embracing the technology of their generation and learning how to make it work for them for fun, sport, and connection. Instead of trying to limit what they enjoy, COPE strives to help parents embrace it and work with their children to ensure they get the most out of their experiences. Just like any social group or activity, there is always the possibility of negative interactions—but with parent involvement, children will be equipped to face those challenges and will be confident to ask you, their parents, for help and guidance.

We encourage listening to your child, engaging in their online social world, and spectating their games. We highly encourage playing games with them. With adequate equipment, planned schedules, and skilled coaching, gamers learn resilience, team building, strategy, and time management, just like any sport. Most importantly, they build bonds with like-minded peers and even with parents when we support their activities and demonstrate our pride in their achievements.

Looking at the esports facts we know

So where does gaming lead our youth?

COPE parents have seen gaming lead kids to new education and career paths. We have witnessed interest in learning about finance and investing from their in-game purchases. We have watched teens start their own businesses, sometimes even with their family—like the Mousepad Company, from pro Fortnite player NRG EpikWhale. We have watched esports athletes be some of the first to jump into web3, a new concept of the internet using blockchain as a basis, to learn new technologies. Most importantly, we have seen it build self-confidence and joy.

Did you know that a century ago, parents had the same fears about books? None of us know the answer to where all this interactive screen time is leading, but my experience with these amazing tech savvy minds says the kids will be alright.