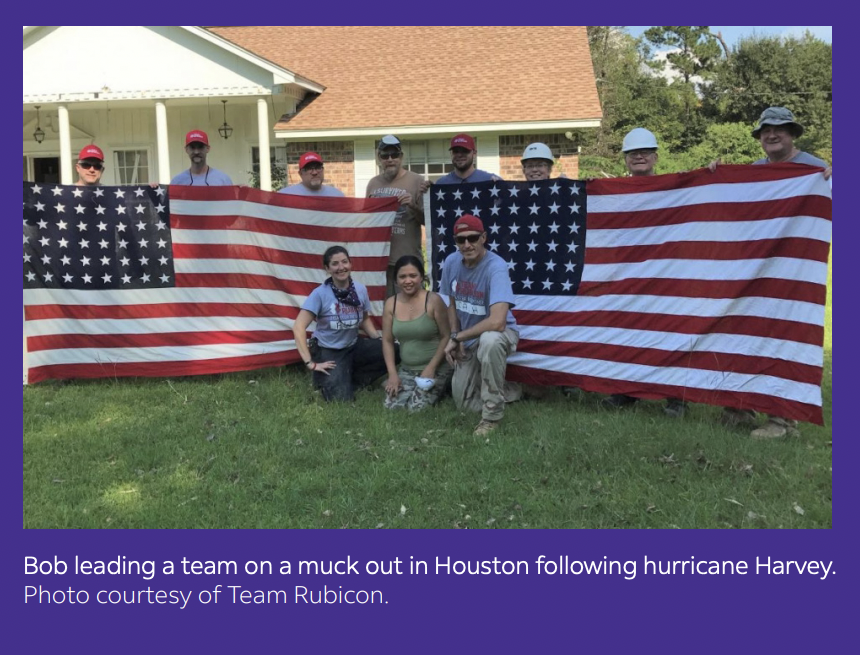 This story first appeared in the FedEx Delivering for Good Report.

Air Force veteran, and FedEx Express crewmember Bob Bledsoe has been called a legend by fellow volunteers. That’s partly because he’s been serving with Team Rubicon almost as far back as its founding, but mostly because of his leadership.

Team Rubicon is a nonprofit that pairs the skills and experiences of military veterans with first responders and civilian volunteers to serve communities before, during, and after disasters and humanitarian crises. FedEx has supported Team Rubicon for five years.

Bob is the Volunteer Field Operations Lead for Team Rubicon’s North Branch. “I love mentoring newer volunteers, and I learn something new from them every day,” Bob says.

In 2010, his daughter was working in Haiti when the devastating earthquake struck. While coordinating medevacs, she happened to meet Team Rubicon’s first strike team led by Jake Wood, the organization’s co-founder and Executive Chairman. Soon after, she became a volunteer and her father followed her lead.

Bob first deployed with the organization in 2013 after a monstrous tornado carved a destructive path through Moore, Oklahoma. Being originally from the area, he was compelled to serve. “It felt personal,” he said. Since then, he’s been on too many operations to name, but the list includes a response in Houston after Hurricane Harvey in 2017, and more recently, serving to help with COVID-19 relief efforts.

A legend indeed, Bob exemplifies the FedEx Purple Promise: I will make every FedEx experience outstanding. Team members like Bob extend the Purple Promise not only to customers, but to fellow volunteers and communities as well.