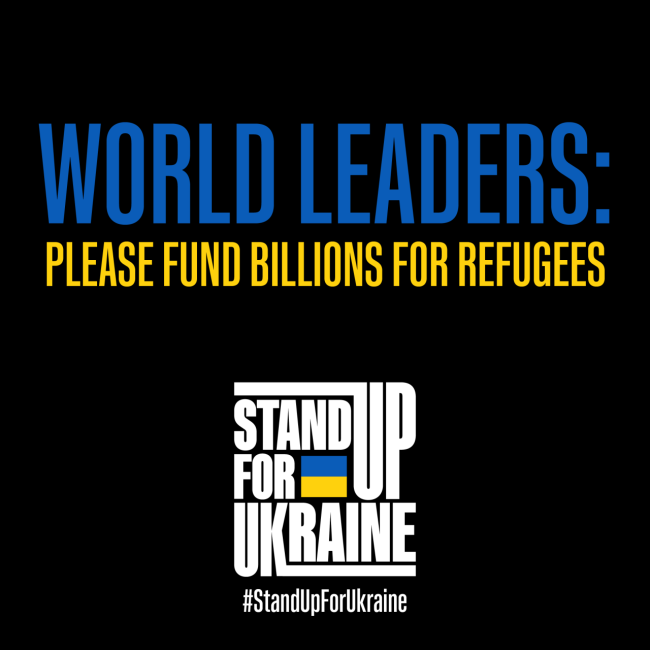 Prior to the April 9 pledging summit, participants will take to social media to galvanize citizens across the globe to unite and speak out to governments, institutions, corporations, and individuals, asking them to provide additional emergency funding needed to help the millions displaced by the invasion in Ukraine, and to those on the move worldwide.

President Zelenskyy called on the international community on behalf of his citizens who have been displaced and injured by the war, saying, “On April 9, the biggest online event ‘Social Media Rally’ will support people who were forced to flee Ukraine. I'm inviting everybody: musicians, actors, athletes, businessmen, politicians, everybody. Everyone who wants to join this movement and ‘Stand Up for Ukraine.’”

The Dire Humanitarian Situation in Ukraine
We have all witnessed the catastrophe unfolding in Ukraine, where the human cost has been devastating, destroying lives and leading to mass displacement. According to UNHCR, around 12 million people need assistance currently because of the war in Ukraine. More than 6.5 million are displaced internally. And in one month, over 3.5 million people have left Ukraine and fled into neighboring countries. Nearly 2 million among them are women and children.

In other words, this is one of the largest refugee crises in our lifetime. Mothers and children have had to flee the country to survive, forced to leave behind husbands, fathers and brothers to continue the fight.

On March 1, the United Nations released an emergency funding appeal for $1.7B to support people inside Ukraine – including those internally displaced – as well as those seeking shelter beyond its borders, for an initial period of three months. Now one month into a conflict that is sadly raging on, significant funds are needed now to address immediate needs like food, shelter and decent living conditions for those who fled their homes including millions of internally displaced people, and support for the generous neighboring countries hosting millions of refugees.

Many vulnerable people remain in Ukraine—elderly, children, people with disabilities—unable to find a way to leave the country. Their needs cannot be overlooked. Each day, the UN and other organizations on the ground are assessing the growing needs among the millions who still live in the country.

President Ursula von der Leyen, said: “Millions of people are fleeing the bombs falling on Ukrainian cities. They are leaving their homes and their lives behind, to reach safety in other parts of Ukraine or in neighbouring countries. A Ukrainian child has become a refugee every second since the start of the war. The world must stand up for them. The European Union is catering for the needs of the millions of refugees it hosts. And we will further step up. But so much is needed – and the brave people of Ukraine deserve solidarity from citizens and governments around the globe. Together, we can give them a safe home and bring some light in their lives at this dark hour.”

Prime Minister Justin Trudeau said: “Today, our message to the Ukrainian people is this: we are standing with you. Whether you need food, water, shelter, or medical aid – we are rallying the world to continue to have your backs and provide critical assistance where it is needed most. When we all work together, we can achieve the best outcomes for those displaced by Putin's illegal and unjustifiable invasion of Ukraine.”

Global Refugee Crisis Dangerously Underfunded
This crisis comes at a time when aid organizations and development budgets are already under strain. More than 100 million people around the world have been forced to flee their homes and relief efforts globally are woefully underfunded. Globally, the United Nations High Commissioner for Refugees’ system faces an approximately US$10 billion funding shortfall to support millions of forcibly displaced people in more than 133 countries and territories around the globe. Additionally, the United Nations announced just last week that it received less than one-third of what it needs to fully fund its operations and avoid starvation in war-torn Yemen. Other conflict situations face similar challenges.

The world must avoid pitting vulnerable people against one another. Contributions to Ukrainian refugee efforts must be new and additional to existing development priorities, governments must live up to their international aid obligations, and all people seeking refuge should be treated fairly and equally without discrimination based on nationality, race, or place of origin.

From today through to Saturday, April 9, artists, athletes, actors, politicians and citizens will “stand up” in unity and demand funding for refugee relief efforts around the world.

Hugh Evans, CEO of Global Citizen, said: “History has shown us that conflict and poverty are closely interconnected, resulting in the weakening of the rule of law, a collapse in economic development and often catastrophic humanitarian situations. There is no doubt that the conflict in Ukraine has led to a humanitarian crisis – members of Global Citizen saw this ourselves at the Ukrainian-Polish border. Millions have fled their homes, with millions more likely on their way. Global Citizen has a history of responding rapidly to humanitarian crises, and this is no different. We’re calling for an immediate end to this crisis, and the provision of immediate financing to support refugee relief efforts not just in Ukraine but around the world.”

Global citizens everywhere are urged to join this social media rally by visiting www.forukraine.com and take action to call on governments and businesses to pledge the billions that the refugee relief effort so urgently needs.

For more information about “Stand Up for Ukraine,” visit www.forukraine.com.

ABOUT GLOBAL CITIZEN:
Global Citizen is the world's largest movement of action takers and impact makers dedicated to ending extreme poverty NOW. We post, tweet, message, vote, sign, and call to inspire those who can make things happen — government leaders, businesses, philanthropists, artists, and citizens — together improving lives. By downloading our app, Global Citizens learn about the systemic causes of extreme poverty, take action on those issues, and earn rewards, which can be redeemed for tickets to concerts, events, and experiences all over the world. For more information, visit www.globalcitizen.org and follow @GlblCtzn.