Human behavior – especially our emissions of greenhouse gases – has played a major factor in the global warming trend over the last century. Different parts of the world are warming at different rates, but according to a U.S. National Climate Assessment, the average global temperature has increased by about 1 degree Celsius (1.8°F) between 1901 to 2016. While there are many factors at play, experts agree that the rise in global temperatures is contributing to extreme weather events making what were once rare occurrences, increasingly routine and destructive. Growing food under such conditions becomes increasingly challenging, threatening to decrease the quantity and quality of our food. 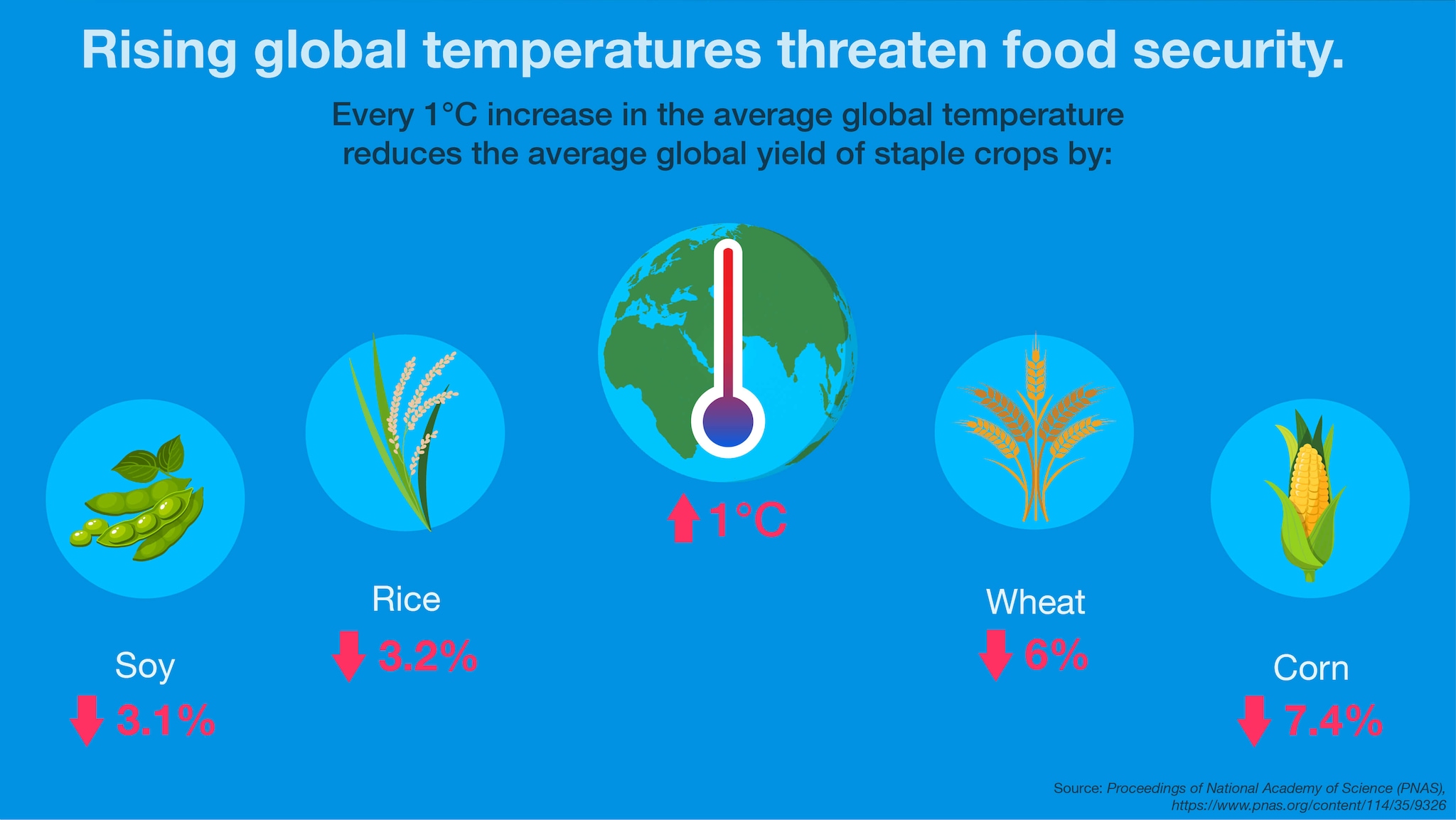 Agriculture is front and center in the climate crisis, both in its vulnerability to increasingly devastating weather patterns and as a source of greenhouse gas emissions. Agriculture, however, also can benefit the environment by helping to put carbon back into the ground. Soil has significant potential to store carbon and to mitigate the effects of climate change, which means climate-smart agricultural practices like planting cover crops and choosing to implement no-till farming can be part of the solution. These practices help soil hold water and boost overall soil health. Digital tools as part of an integrated system are already helping farmers to grow as efficiently and environmentally friendly as possible. One new promising breeding innovation is a shorter stature corn plant.

A shorter stature plant is not a new idea. The innovation is inspired by the work of plant breeder and Nobel Peace Prize winner Dr. Norman Borlaug who in the mid- 1940s -1950s developed new varieties of stronger, shorter stature wheat to produce more and thrive in a wide range of environments. Borlaug promoted increasing the productivity of agriculture as a potential tool to control deforestation by reducing the demand for new farmland. Since the success of Borlaug’s short stature wheat, researchers have been exploring shorter plant architecture. Today you can find shorter varieties of rice, sorghum and other cereals. Corn (and maize), a staple crop across the globe, has historically been challenging to create in a short stature form without impacting ear quality or yield. That is until now.

What is Short Stature Corn?

Researchers at Bayer are developing corn that stands shorter – and much sturdier – in the field than any corn that farmers have previously grown. Multiple varieties of Short Stature Corn leveraging the latest innovations in biology—including traditional breeding, biotech and gene editing— are currently under development to provide an integrated system that is tailored to the grower’s region and regulatory environment. A traditional breeding short stature maize variety named VITALA recently launched in Mexico following years of research in the Sinaloa region. With a maximum height of 7 feet, Short Stature Corn varieties provide several potential sustainable benefits for battling extreme weather.

Because Short Stature Corn grows lower to the ground, it is sturdier and less likely to break in high winds than traditional corn. Dr. Manuel Oyervides Garcia, the researcher behind VITALA, explains: “Short Stature Corn has exceptional stalks and roots with a lodging resistance not present in other maize hybrids. Short Stature Corn is minimizing the lodging impact caused by climate change helping farmers achieve their harvest goals.”

In addition, Short Stature Corn varieties can potentially better withstand drought: “The VITALA system is more tolerant to drought,” explains Dr. Oyervides Garcia. Research has shown that under limited water conditions, some varieties of Short Stature Corn show reduced signs of stress like leaf rolling and wilting, thus demonstrating the potential for improved yields under drought conditions. Researchers have also observed deeper roots in some Short Stature Corn varieties, which appears to enable the plant to access a deeper water table. “We also saw advantages of the efficiency of photosynthesis because the corn stays green longer before Harvest”, adds Dr. Oyervides Garcia.

With traditional corn, its canopy grows higher than a farmer’s head, making it challenging to spot problems within a field without the use of planes. Short Stature Corn is easier to walk into and allows wheeled machinery to operate in the fields throughout the season, giving farmers a chance to better scout and protect their crops more precisely from the ground. The ability to use ground equipment rather than having to access the crops aerially also means an improved greenhouse gas footprint.

One final advantage of a shorter stature corn plant is the ability to grow the same amount of food on less land. In some regions where it agronomically makes sense to do so, the shorter stature corn can be developed —as is the case with VITALA— to be planted more densely, which allows growers to actually produce more on the same amount of land. Farmer Miguel Palazuelos, who participated in local grower in-field trials, summarizes how the use of Short Stature Corn has benefited his farm: “For us farmers lodging can represent 40% to 50% loss, for me VITALA has been a great support for better yields, better use of soil, and better use of water”. Short Stature Corn is proving to be a transformational technology that enables sustainable intensification of corn production, allowing farmers to be more productive and utilize inputs and natural resources more efficiently. And increasing production without expanding land use, preserves land for biodiversity.

A Growing Population Demands a Commitment to Action

As climate change and extreme weather impact crop yields, the stakes for global food security become even higher. It is expected that 10 billion people —an increase of about 3 billion people —will live on earth by 2050. That means a 70% increase in food production is needed in the next 30 years. It is estimated that there are already nearly 690 million people who are food insecure in the world today. The current COVID-19 crisis exacerbates the challenges food systems face, making it even more difficult to achieve zero hunger by 2030, the second of the United Nations’ 17 Sustainable Development Goals. Without solutions to mitigate the impact a changing climate has on our food, millions of more people could be at risk of malnutrition. Bayer continues to invest in tailored integrated systems that drive us toward our own reduced environmental impact commitment. And Short Stature Corn is the latest innovation to help farmers meet the needs of a growing population in a changing climate.