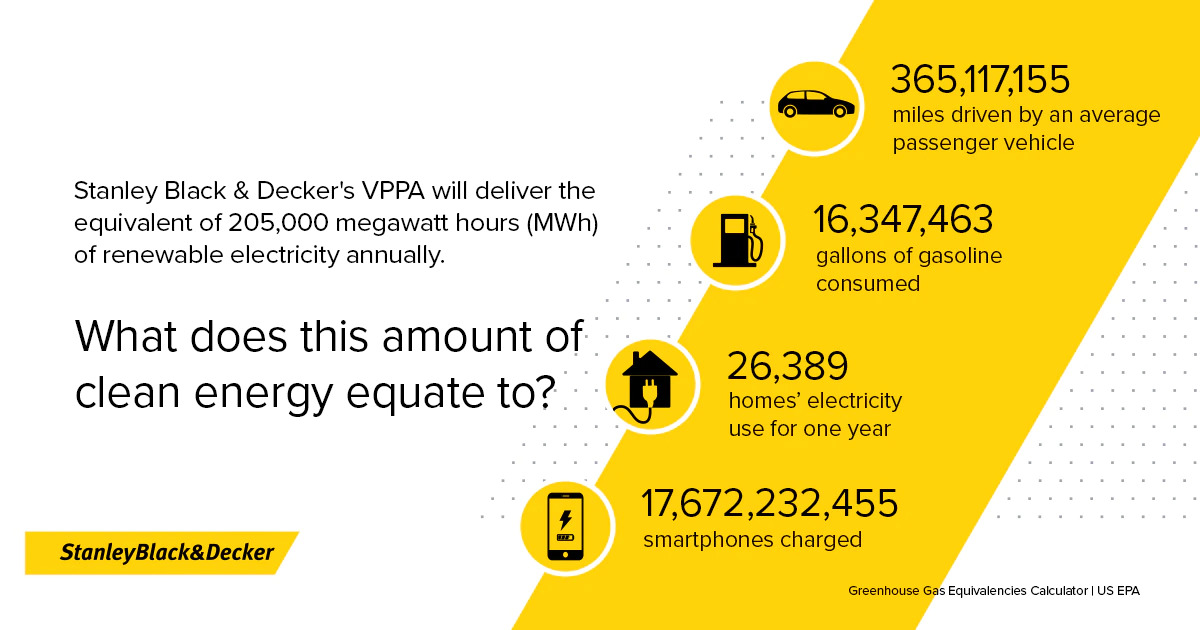 What a major step toward achieving carbon neutrality across our operations by 2030. Among the process we can look forward to – delivering the equivalent of 54 megawatts of new wind power capacity or approximately 205,000 megawatt hours (MWh) of renewable electricity annually.

“Creating a more sustainable world and achieving carbon neutrality by 2030 requires a transition to renewable energy,” affirms Deb Geyer, Corporate Responsibility Officer for Stanley Black & Decker. “This project, operational by the end of 2022, will continue to support Stanley Black & Decker’s strategy to source 100 percent of its United States and Canada electricity needs from renewable power.”

The VPPA will bring clean renewable energy onto the grid and ensure Stanley Black & Decker continues to address its North American electricity usage by delivering the equivalent of 54 megawatts of new wind power capacity or approximately 205,000 megawatt hours (MWh) of renewable electricity annually. This amount of clean energy is equivalent to avoiding the carbon emissions from more than 365 million miles driven by an average passenger car, or the annual electricity consumption of nearly 26,000 homes1.

A VPPA is a long-term contract for renewable energy between a buyer and a power project developer. VPPAs have become a strategic means for corporations to purchase wind and solar power at scale.

ENGIE is developing the new wind project in Limestone and Navarro Counties in Texas and will build, own and operate it.

“We are excited to collaborate with Stanley Black & Decker on their journey to carbon neutrality through the Limestone project,” states Dave Carroll, Chief Renewables Officer of ENGIE North America. “As a leading builder and operator of around 4GW of wind and solar infrastructure in North America, it’s a privilege to support an organization whose stated purpose is, For Those Who Make The World.”

Schneider Electric, the leading advisor on corporate renewable energy procurement globally, supported Stanley Black & Decker in the selection of and negotiations for the project.

“It’s an honor to partner with a company acting urgently to address climate change and who is consistently recognized as a climate leader by organizations such as the Dow Jones Sustainability World Index and CDP,” says Steve Wilhite, President, Schneider Electric Sustainability Business. “It’s impactful to see that Stanley Black & Decker is striving to be carbon neutral and is taking action to support renewable energy production in the United States.”

To create a more sustainable world, we’ve set 2030 targets of becoming better than carbon neutral (what we call carbon positive), achieving zero waste to landfill and ensuring sustainable water use across our operations.