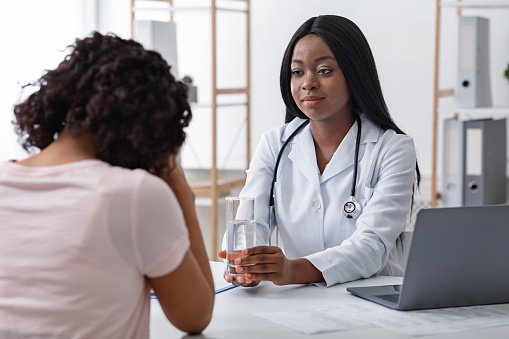 By Charlene Polite Corley, VP of Diverse Insights and Partnerships

Empowering historically excluded people to lead in the media industry means bringing their talent—as well as their lived experiences—to the forefront. Telling their unique stories often means opportunities for audiences to connect more deeply with the characters or headlines that represent their own path; one that may have otherwise gone unseen. A perfect recent example that emerged as a critical health issue impacting the Black community took center stage late in 2021—and I don’t mean COVID-19.

[Spoiler alert: this paragraph contains spoilers from Harlem.] The Harlem crew’s resident boss Tye, portrayed by Jerrie Johnson, is trying to push through crippling abdominal and back pain until finally she ends up having emergency surgery. The diagnosis? A ruptured cyst. And the suggested treatment? A hysterectomy. From the doctor’s hesitancy to prescribe appropriate pain medication to the dismissive approach to a potentially life-altering course of treatment, this episode was tragically a very relatable portrayal of disparities in Black women’s health care.

In 2013, I was diagnosed with a similarly painful and common condition: uterine fibroids. My personal experience centered around a six-hour surgery to remove multiple benign tumors, varying in diameter from golf ball to grapefruit size. I remember the flippant advice to “just have a baby” before getting the surgery, known as a myomectomy. I remember the stress and anxiety before and after the surgery. And I remember the local pharmacy not filling the full prescription of pain medication after my surgery—and my doctor’s outrage at my post-op appointment when he learned I’d been recuperating at home with only a three-day supply.

While Tye’s case demonstrated the disruptive impact of ovarian cysts, her story was also closely relatable to me—and the 26 million women between the ages of 15 and 50 that develop uterine fibroids, according to the U.S. National Library of Medicine. For Black women in particular, reproductive health conditions and the ongoing obstacles to compassionate, informed and effective treatment that too often accompany them, are a common part of life. How common? Nielsen Scarborough data shows that Black women between the ages of 35 to 49 are nearly six and a half times more likely to have been diagnosed with fibroids.

And the percentage of young Black women impacted by fibroids is staggering—especially considering the emotional toll of the diagnosis along with the physical symptoms. A recent study in the American Journal of Obstetrics & Gynecology found that the stressors related to a fibroids diagnosis can be just as debilitating as a diagnosis of heart disease, diabetes, or even breast cancer. Groups like The White Dress Project have been working for years to raise awareness, advance legislation and provide a support network for those living with fibroids and seeking treatment. But the power of representative storytelling in both scripted television and news content ensures an even greater reach on this topic; one that remains largely silent outside the Black community and Black media.

Nielsen’s recent Being Seen On Screen report revealed that programs with Black women in the writer’s room delivered content that not only centered Black women on screen, but also offered different context in how they were portrayed. On a program like Harlem, that’s created, led and mostly written by Black women, it’s no wonder the impact of this pervasive health crisis and the obstacles many of us face seeking treatment became a centerpiece of a character’s story. But their program wasn’t the only one to boldly confront key issues facing Black reproductive health last year. Tiffany Cross, host of MSNBC’s Cross Connection, revealed she underwent the oft recommended hysterectomy to end her years-long battle with fibroids. It was the first time I’d seen the details of the condition, let alone this course of treatment openly discussed by an anchor on TV.

So little about how these conditions develop—and why they impact Black people at higher rates—remains unknown. But television can play an important role in raising awareness as well as empathy. Importantly, Black women are twice as likely to seek out TV content where they’re seen on screen. This means there’s an opportunity to amplify the need for research, prevention, and less invasive procedures—as well as normalizing consultative and nondiscriminatory care.

As you likely saw throughout this Black History Month and the focus on Health and Wellness, there’s a long way to go to address inequities in our healthcare. But my hope is that we continue to see Black women highlighting disparities and inspiring change as meaningful diversity continues to infiltrate the media industry.