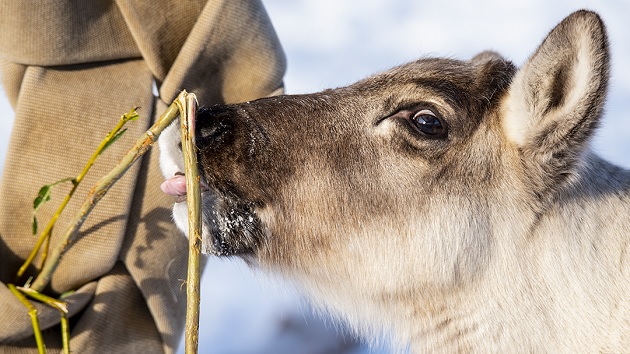 Primrose, a seven-month-old woodland caribou calf, approaches a tree stump, sniffing it for signs of lichen.

The plant is hidden around the caribou’s enclosure by Wilder Institute/Calgary Zoo staff—they tuck it into tree bark, nestle it in shrubs, and cover it with alfalfa hay to stimulate the caribou’s natural foraging instincts.

In the wild, woodland caribou would rely on forest lichens found in Canada’s old boreal forests for survival. Deforestation and the loss of access to those lichens have contributed to the species’ dwindling numbers, particularly in Alberta.

That’s where the Wilder Institute/Calgary Zoo comes in. Thanks to the zoo’s critical wildlife conservation efforts, Primrose lives with a small herd of caribou (including her dad Kirby, mom Vanilla, and big sister Mica) in the zoo’s Canadian Wilds area, a 21-acre enclosure for North American birds and mammals.

Lichen is a special treat for the caribou, delivered to the zoo by schoolchildren and Indigenous communities in Alberta and BC, thanks to this partnership. Eager volunteers comb the forests for Bryoria lichen, a hairlike combination of algae and fungus, and deliver it to the zoo to nourish the caribou.

“Our organization is always looking for innovative, science-based solutions to improve the sustainability and welfare of animals,” says Wilder Institute/Calgary Zoo president and CEO Clement Lanthier.

The lichen is thought to be an essential component of the animal’s health and ability to breed. The arrangement with schools and Indigenous communities allows caribou to have a consistent supply of high-quality lichens, which not only increases the overall welfare of the herd but also serves as a hands-on education program that empowers people to play a role in fighting the extinction of plants and animals.

“Thanks to the support of partners like Enbridge, our Animal Care, Health and Welfare team has been able to conduct industry-leading research and make a transformative difference for the rare and endangered species in our care,” Lanthier explains.

At-risk animals like the woodland caribou—and more than 270 of the zoo’s nearly 1,000 domestic and exotic animals—benefit from the world-renowned Wilder Institute/Calgary Zoo’s efforts.

Later this year, the Wilder Institute/Calgary Zoo will open the first phase of its new Wildlife Conservation Centre in Strathmore, east of Calgary. There, the research team will expand its capacity to apply science-based solutions to sustain some of Canada’s most iconic species and help them return to the wild—where they belong.

“The construction of the Wilder Institute/Calgary Zoo’s new Wildlife Conservation Centre represents a next step for an organization that has spent decades applying science-based solutions to sustain some of our country’s most iconic species,” says Gina Jordan, manager of Enbridge’s Fueling Futures corporate citizenship program.

“Since our sponsorship began, our organization has been pleased to join the zoo in welcoming the birth of two woodland caribou calves, Primrose and Mica,” Jordan adds.

Every year, more than one million guests visit the Wilder Institute/Calgary Zoo.

As conservation efforts and partnerships develop, visitors will not only experience the pure delight of viewing animals in the zoo’s wild-like settings—they’ll be well informed to become ambassadors committed to protecting endangered species and keeping the future wild.

(TOP PHOTO: Primrose the caribou calf enjoys a meal. Thanks to the Wilder Institute/Calgary Zoo’s critical wildlife conservation efforts, Primrose lives with a small herd of caribou (including her dad Kirby, mom Vanilla, and big sister Mica) in the zoo’s Canadian Wilds area, a 21-acre enclosure for North American birds and mammals.)