As the first Black General Manager of a Marathon Petroleum refinery, he is committed to maturing Diversity, Equity & Inclusion (DE&I) at MPC and continuing his mission of community investment.

As the first Black General Manager of a Marathon Petroleum refinery, he is committed to maturing Diversity, Equity & Inclusion (DE&I) at MPC and continuing his mission of community investment. 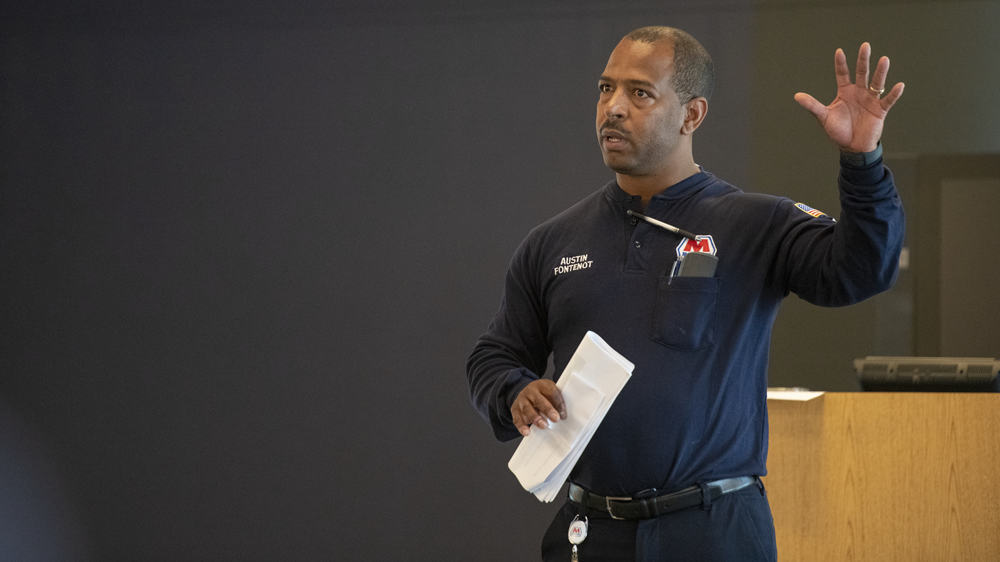 Austin Fontenot knew he wanted to be a chemical engineer when he was in middle school. What he did not envision was his innate leadership skills would lead him to become the first Black General Manager of a Marathon Petroleum refinery. At every stop on the way, he has helped create a platform for inclusivity and people advocacy.

"I’m from a small, segregated town in Texas, but I had the opportunity to go to a really good school and meet really good people that fundamentally broadened my perspective," said Fontenot. "My friends' parents showed me different types of careers, and I knew what I was going to be from a very early age."

After high school, he attended The University of Texas at Austin, where he remembers the school's signature motto having a profound impact on his life.

"'What starts here changes the world’ is the motto and that's my mentality,” said Fontenot. “I am purposed to change the world around me. As a boy from the country, I was good financially three jobs ago; however, I truly have an opportunity to live to my full potential and advocate for others in the process."

Fontenot started his career as a summer intern for ExxonMobil in a polyethylene plant. After four summers with the program, he decided that he did not want to focus on the petrochemical industry and chose to go into refining. He spent six years working at La Gloria Oil & Gas Company (now Delek), then the LyondellBasell Houston refinery, and eventually became an Area Team Leader at the refinery in Texas City that became Marathon Petroleum’s Galveston Bay refinery. After Marathon Petroleum acquired the facility, Operations Manager Don McCord helped transform the location and saw potential in Fontenot, who stayed on to support the teams during the acquisition in the role of Area Team Leader. In 2014, Connie Bradley, General Manager of the Texas Refining Division at the time, with support from Ray Brooks, who was the General Manager of the Galveston Bay refinery, and McCord, promoted Fontenot to Products Control Manager at the Texas Refining Division, located adjacent to the larger Galveston Bay refinery. In 2015, he returned to the Galveston Bay refinery as Products Control Manager and was part of the successful completion of the integration of the two adjacent facilities into one.

“I saw Austin always taking accountability to learn from difficult problems or situations when he was a team leader at Galveston Bay,” said McCord. “It is clear to me that his positive approach and willingness to learn from problems has been extremely helpful in driving personal growth and improvement, as well as helping him quickly adapt to new things throughout his career. I believe one of the most important things we can do as leaders is to develop others because it creates future leaders who will positively impact the company.”

Fontenot spent four years at the Galveston Bay refinery before moving to California in 2019, where he was the Operations Manager at the company’s Los Angeles refinery. In addition to his day job, he has worked to make changes in the communities where he has lived and worked. As a member of Gulf Coast Big Brothers Big Sisters, he was able to recruit MPC employees to join the organization. He still maintains contact with his Little Brother. As a board member for the Boys and Girls Club of Carson in California, Fontenot shared a desire to empower kids to make positive changes in their communities. He was focused on eliminating racial and economic barriers to achievement.

Fontenot did not stop there. He was named General Manager of the St. Paul Park refinery in July 2021. As the first Black General Manager of a Marathon Petroleum refinery, he is committed to maturing Diversity, Equity & Inclusion (DE&I) at MPC and continuing his mission of community investment. He believes the DE&I Employee Networks are a huge step in the right direction.

"I want to have direct input into how we are driving the culture change at Marathon Petroleum. Where I see myself making the biggest impact is through people advocacy," said Fontenot. "The individual needs to be valued first. That puts you at a level of comfort, where we can then be inclusive. It's about dedicating yourself to the individual and leveraging those professional and personal relationships to deliver extraordinary results and differentiate performance by inspiring and motivating our teams."

Marcus Garvin was an Operations Shift Foreman when he worked for Fontenot at the Galveston Bay refinery and experienced his leadership style firsthand.

“In successive roles as I developed, he was always a mentor for me. He has always been someone who takes an interest in helping others to grow. That is his personality,” said Garvin, who is now the Operations Manager at the Catlettsburg refinery. “His style is not to always give you the answers, but he asks you the right questions you need to find the answer yourself. And that sets you on the path for growth in your own career. I went from a shift foreman to operations manager now at the Catlettsburg refinery in seven years. He helped me believe that I could make my goals a reality.”

Damon Davis, IT Supervisor at the San Antonio Office, worked with Fontenot at the Galveston Bay refinery and said they connected as BIPOC employees who wanted to make an impact for themselves and their company.

“What makes Austin special is his desire and positive perspective where he wants to inspire and give his best, so that not only he is successful, but everyone he works with is successful as well,” said Davis. “Austin extends this positive aura beyond the confines of Marathon and into his personal life and community.”

Fontenot believes his experience working at a smaller, rural refinery early in his career, understanding regime changes from both sides of the spectrum (outsider and insider), and his skills bringing teams together will help him fulfill his purpose. Today, he's focused on learning and leading.

"I read a lot of books,” said Fontenot. “Malcom Gladwell books. Books on leadership. All types of books. I read them because they are important to stretch my thought processes. I read books that focus on emotional intelligence, to truly build that professional/personal relationship and connect what people want with the organization’s goals. I think I’ve been able to do that."

About Me: From Nome, Texas
Education: Graduated from Hardin-Jefferson ISD; Bachelor of Science in Chemical Engineering from The University of Texas
Family: Married to Rosalind for 20 years; twin 13-year-old daughters, who are national soccer champions with the Slammers FC in Southern California
Leadership style: People first. I am dedicated to the individuals on my team - figuring out how to help them be successful.
Favorite Books: Change the Culture, Change the Game by Roger Connors and Tom Smith; Primal Leadership: Realizing the Power of Emotional Intelligence by Daniel Goleman, Richard Boyatzis, and Annie McKee; Drive: The Surprising Truth About What Motivates Us by Daniel Pin