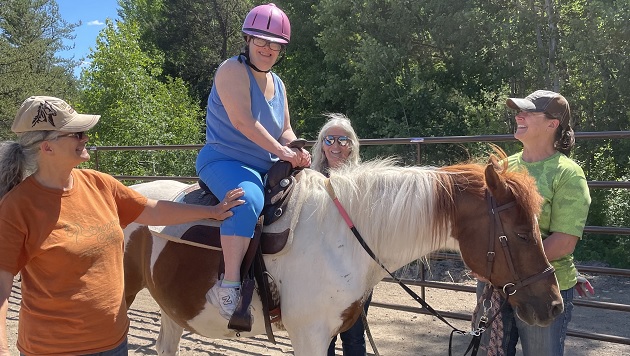 Horses have been long known to elicit a special connection with humans, and Jack Pine Stables has been mastering this art for over two decades.

Now located in Akeley, MN, this therapeutic horse program offers lessons for riders young and old with incalculable benefits, both physically and mentally. From improving balance and core strength to building self-esteem and confidence, riders come back year after year to mount these gentle giants.

“We have about 50 riders each summer, 20 to 25 of whom compete in the Special Olympics. It never gets old watching the riders just flourish,” says Teri Gapinski, Director of Jack Pine Stables. “So often we have a new rider who we think will be assisted forever, and then just four or five weeks later they’re riding independently.”

Jack Pine Stables began in 2000 and was inspired by a friend of the founders, who was blind. In 2019, the organization’s founding couple retired, sold their home and farm and passed the reins to Gapinski. But Teri’s story began long before she took over—she began volunteering in 2008.

“From working in special education at Walker-Hackensack-Akeley, I knew a lot of the riders already,” says Gapinski. “I get such a thrill out of seeing their smiles and the confidence they get from riding.”

Left with the challenge of finding a new home for the program, Teri met a generous donor who wanted her land to be used for good, and donated 40 acres to Jack Pine Stables. That donation led to the creation of a new facility for the program, and has widened the organization’s horizon in terms of program potential and capacity.

In recent months, Enbridge made a $10,000 Fueling Futures donation to Jack Pine Stables as part of our commitment to improve quality of life in communities near our operations. The grant supported construction of a riding arena, and also improved accessibility to the ranch by funding an upgrade to the driveway.

Other than the programming geared towards special needs riders, Jack Pine Stables also supports other minority and specialty school groups. The facility is focused on expanding its outreach to more Native Americans and currently provides horse rides for Veterans and their families during Wounded Warrior weekend.

“Basically, we are here to help anybody who has physical, mental or emotional challenges and disabilities,” says Gapinski.

The next focus for the program is transportation, as Gapinski says the progression from awareness of the stable to actually getting there can be “a struggle.”

“Teachers and parents can get our information out there, but if parents don’t have the means to get here, we can’t connect with them,” says Gapinski.

Those interested in learning more about Jack Pine Stables and how to support their efforts can get in touch at any time.

As for Gapinski’s favorite part of the job?