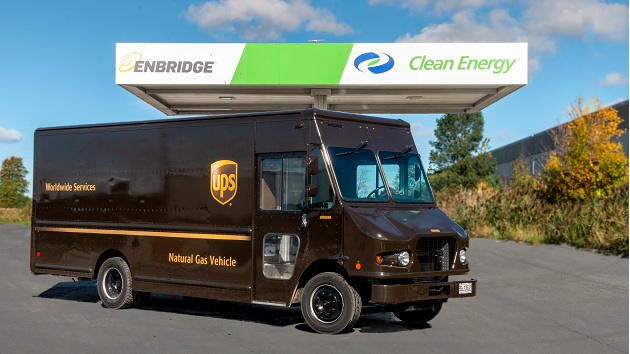 The multi-year agreement, announced today, will make two million litres of the lower-carbon fuel (the equivalent of 525,000 gallons of gasoline) available to the delivery vans at a CNG fueling station near UPS’s facility in London. Clean Energy estimates the move will reduce greenhouse gas emissions by 700 metric tons.

The London station is one of three CNG fueling stations along the Highway 401 corridor that Clean Energy and Enbridge partnered on in 2018, giving truck fleets convenient access to the affordable, cleaner fuel along one of the most heavily trafficked truck routes in North America. These three stations provide up to 75% route coverage in Ontario.

“We are pleased to help the medium and heavy transportation industries that are working hard to reduce emissions,” says Cynthia Hansen, Enbridge’s Executive Vice President and President of Gas Distribution and Storage. “CNG is a cleaner-burning solution for fleet and transit vehicles that can immediately reduce emissions by up to 20% as compared to gasoline or diesel while also reducing fuel costs.”

The transportation sector is one of the largest carbon emitters in Ontario. Roughly five billion litres of on-road diesel are consumed in the province annually, and CNG is a readily available, lower-carbon alternative.

CNG is a lower-carbon alternative to gasoline or diesel that’s made by compressing natural gas or renewable natural gas to less than 1% of its volume at standard atmospheric pressure.

In addition to reducing greenhouse gas emissions, CNG also produces lower levels of nitrogen oxide and volatile organic compounds compared to other fuel sources. A dedicated CNG vehicle can save operators up to 40% in fuel costs compared to its diesel equivalent.

Chad Lindholm, Senior Vice President at Clean Energy, says the company is excited by the growing use of CNG in Ontario, because it will significantly lower greenhouse gas emissions and result in a positive environmental impact to reduce local air pollutants.

“CNG is an important part of UPS’s strategy to increase its use of alternative fuel and reduce our emissions,” adds Floyd Bristol, Vice President of Automotive, UPS Canada. “Adding these new vehicles to our growing alternative fuel fleet in Canada will have a measurable impact.”

Todd Smith, Ontario’s Minister of Energy, notes the program is helping to advance Ontario’s transition to a lower-carbon future: “The use of compressed natural gas (CNG) is a cleaner fuel choice that can help reduce greenhouse gas emissions.”