Company ranks No. 1 in the Long-Term Investment Value category in the Insurance: Life and Health Industry and No. 2 for innovation

Company ranks No. 1 in the Long-Term Investment Value category in the Insurance: Life and Health Industry and No. 2 for innovation 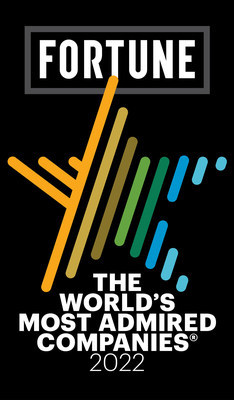 COLUMBUS, Ga., February 14, 2022 /CSRwire/ -- Aflac Incorporated takes top honors in the Long-Term Investment Value category for the Insurance: Life and Health Industry in Fortune's annual list of the World's Most Admired Companies, marking 21 years of appearing on the prestigious roster. The company ranks No. 2 among its peers for innovation and is in the top three overall in the Insurance: Life and Health Industry.

"I am extremely proud of the team at Aflac for continuously innovating across all areas of the business. The work they do every day centers around our mission of caring for policyholders, providing excellent returns for our shareholders and being there when it matters most – and that work is noticed around the world," said Aflac Incorporated Chairman and CEO Dan Amos. "We are honored to be included in this prestigious list; I congratulate the Aflac team for this important achievement and for elevating our global reputation among executives and analysts in the industry."

Since 1990, when Dan Amos became CEO, Aflac Incorporated's stock has increased from 95 cents per share to its current value, exceeding $66 per share. In his 32nd year at the helm, Amos is the second-longest tenured CEO in the Fortune 200, and since then, the company's total shareholder return – including reinvested cash dividends – exceeded 10,381% as of the end of 2021.

"We know a key to success is the balance of purpose and profit. Just as we are dedicated to caring for our policyholders, we also are committed to providing consistent value for our shareholders and are proud to have delivered 39 consecutive years of annual increases in common stock dividends," said Aflac Incorporated President and Chief Operating Officer Frederick Crawford. "Our strategy for growing the business involves doing right by our employees, our policyholders, and through proper governance, our investors – and it's an honor for this strategy to be recognized by some of the highest caliber analysts and executives around the world."

The World's Most Admired Companies list ranks the best-regarded companies in 52 industries. To determine the companies included on this list, Fortune's partner Korn Ferry asked executives, directors and analysts to rate enterprises in their own industry on nine criteria, from investment value and quality of management and products to social responsibility, innovation and ability to attract talent. A company's score must rank in the top half of its industry survey to be listed. Learn more about this list at www.fortune.com/worlds-most-admired-companies.

Aflac Incorporated (NYSE: AFL) is a Fortune 500 company helping provide protection to more than 50 million people through its subsidiaries in Japan and the U.S., where it is a leading supplemental insurer by paying cash fast when policyholders get sick or injured. For more than six decades, insurance policies of Aflac Incorporated's subsidiaries have given policyholders the opportunity to focus on recovery, not financial stress. In the U.S., Aflac is the number one provider of voluntary/worksite insurance products. Aflac Life Insurance Japan is the leading provider of medical and cancer insurance in Japan, where it insures 1 in 4 households. In 2021, Aflac Incorporated was proud to be included as one of the World's Most Ethical Companies by Ethisphere for the 15th consecutive year, Fortune's list of World's Most Admired Companies for the 20th time, and in the Dow Jones Sustainability North America Index. In 2021, Aflac Incorporated also became a signatory of the Principles for Responsible Investment (PRI), and in 2022, Bloomberg's Gender-Equality Index included Aflac Incorporated for the third consecutive year. To find out how to get help with expenses health insurance doesn't cover, get to know us at aflac.com or aflac.com/espanol. Investors may learn more about Aflac Incorporated and its commitment to ESG and social responsibility at investors.aflac.com under "Sustainability."