Paying Tribute to Our Black Leaders in Science

During Black History Month and beyond, we honor the Black inventors that shaped our company

Paying Tribute to Our Black Leaders in Science

During Black History Month and beyond, we honor the Black inventors that shaped our company 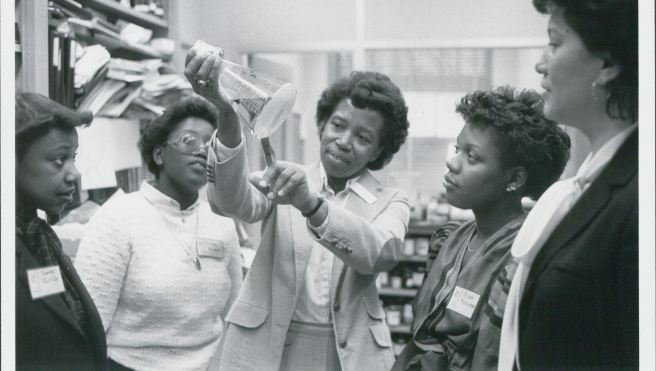 Throughout our company’s history, diversity and inclusion has fueled our mission to help save and improve lives. We recognize that embracing diverse points of views, perspectives and cultures provides us with the knowledge to approach a business problem or challenge in the most effective way, and is the key to success.

Take a look back as we honor four Black leaders and inventors who helped shape our company’s history:

Elouise Collier began working at our company in 1943, where she was a chemical operator at our Rahway Solvent Recovery plant. In 1944, Collier left our company to enter the prestigious Yale University School of Nursing. She was the second Black person to be admitted into the program and the first graduate with a Masters of Nursing in 1946. In announcing her departure to attend Yale, our employee newsletter noted, “during her stay with the company, she made friends, who join at this time, in wishing her the best success in her newly chosen field.”

Dr. Alvin G. Foster began working at our company in 1969. He was later transferred to Basic Animal Science Research where he was ultimately promoted to director. During his time at our company, Dr. Foster was instrumental in promoting education opportunities for the Black community. He became the first chair of Merck’s Black University Liaison Committee (BULC), a group formed in 1977 to support science curricula at Historically Black Colleges and Universities (HBCUs), and founded the HBCU Summer Program (later the Merck-UNCF Scholars Program). He was equally instrumental in promoting opportunities for the Black community at our company, co-founding the Black Employees at Merck (BEAM) and Black Employee Network (BEN) with William “Bill” Bowers in 1970.

Jeannette E. Brown was the first Black woman to earn a graduate degree in chemistry from the University of Minnesota in 1958. She joined Merck Research Laboratories in 1969 where her work synthesizing and purifying compounds contributed to our work in antibiotics. During her time with the company, she coauthored 15 papers and her research contributed to six patents. Brown also served on Merck’s Black University Liaison Commission (BULC) and advised students at Grambling State University, an HBCU in Louisiana. Her long-standing work on the BULC earned her a Management Award from our company in 1992. Brown retired from our company in 1995 and today, she remains committed to chemical research and science education, and has recently published "African American Women Chemists in the Modern Era".

Dr. Lloyd C. Elam became a part of our Board of Directors in 1973 and is believed to be the first Black employee director. Elam was the first African American to receive an M.D. degree from the University of Washington School of Medicine. He later became president and a professor at Meharry Medical College, one of the nation’s oldest and largest historically black medical schools. He founded Meharry’s Medical College’s Psychiatry Department and the school’s Mental Health Center now bears his name. Dr. Elam would remain on our Board of Directors for three decades.

Learn more about the company’s commitment to diversity and inclusion in their Corporate Responsibility Report.