Grace Chionuma’s path to a finance career is rooted in three generations of educational achievement and her resolve to do work that lets her be true to herself.

Grace Chionuma’s path to a finance career is rooted in three generations of educational achievement and her resolve to do work that lets her be true to herself. 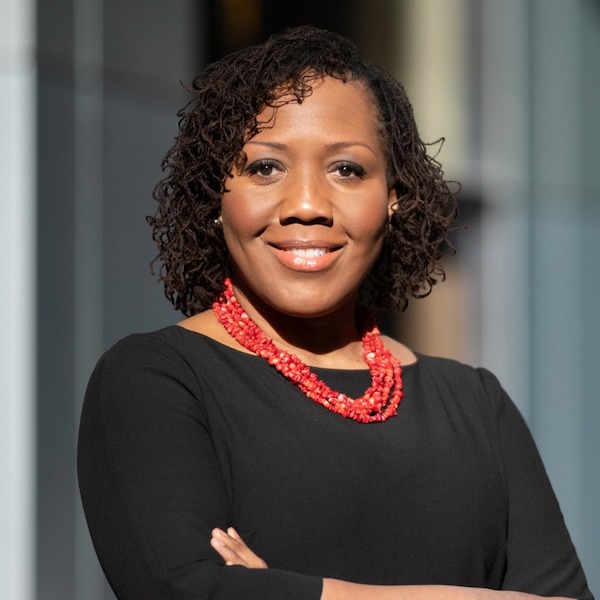 Grace Chionuma’s family has always prized education. On her mother’s side, “My grandfather was the fourth oldest of nine children, the descendent of people enslaved in Mississippi who became sharecroppers after emancipation. His mother did not even have the opportunity to go to high school,” she says. “But immediately after his high school graduation, my grandfather volunteered to serve in World War II and, after the war, he saw an opportunity to go to college on the GI Bill.”

Crawford J. Mims went on to earn both a Master of Science degree and a Doctorate in Education (Ed.D.), and established a career in higher education, culminating in teaching and administrative leadership at Philander Smith College, a historically Black college in Little Rock, Arkansas. “He dedicated his life to education,” says Chionuma. Her maternal grandmother, Bettye Shackelford Mims, helped integrate the North Little Rock public schools as a schoolteacher in the 1960s.

Chionuma's father, meanwhile, came to the U.S. to go to college, after the civil war in his native Nigeria. He landed at the very same college where her grandfather taught. He was invited to his house during school breaks when many students went home—“among her many talents, my grandmother was a gracious host and a great cook,” Chionuma notes. At one of these gatherings, he met the professor's daughter. He later married her on his way to becoming a medical doctor. Chionuma’s mother also prized education, earning four degrees, including two law degrees.

Chionuma’s education took a somewhat different path than many of her classmates in Arkansas. At age 13, she had the opportunity to attend boarding school at Phillips Academy Andover in Massachusetts. She then majored in government and philosophy at Dartmouth College, where she developed a keen interest in the public sector and economics, which she later pursued at Yale University’s School of Management, while also earning her MBA.

Wall Street may be a long way from Little Rock, but Chionuma found the guidance she needed to get there from an organization called the Toigo Foundation , which identifies promising business school students of color and prepares them for careers in the finance industry. Not only does Toigo, which Morgan Stanley partners with, pay for fellows like Chionuma to earn their MBAs, “It shares information, networks, experiences and strategies about financial services with groups of people who historically have been underrepresented in that industry. And that's exactly who I was,” says Chionuma. “The program was invaluable to me.”

Being True to Yourself and Successful

After earning her MBA, Chionuma landed at Morgan Stanley in 2006 as an Investment Banking summer associate. The culture she witnessed appealed to her. “I knew that I was going to need to learn quickly,” Chionuma says. “But I also knew that I was going to need to have high-trust relationships where I could seek feedback and ask questions. And I felt that I found those people at Morgan Stanley. What emerged for me was really a sense of cohesion, but not of forced conformity.”

While she fielded offers from a wide range of companies, Chionuma decided to return to the firm full-time. “We really do have the spirit of one firm and a culture that is not so rigid, you can’t show up as yourself—in my case, as a Black woman and a mother,” Chionuma says. “I didn’t have family that had worked on Wall St. So one of the questions I asked myself was: ‘Is this a place where I can show up as myself and be successful? Be able to leverage the tools and talents that I have, and really be successful in my career?’ And my answer in 2006 was, ‘Yes.’ ”

Like many versatile executives at Morgan Stanley, Chionuma has served in various roles across divisions, from Investment Banking to Sales & Trading. Now a Managing Director in the Public Finance Banking Group within the Fixed Income Division, Chionuma has focused on structuring and financing deals for essential infrastructure projects, in large cities and East Coast states, and for non-profits to support their vital mission-driven work.

She also has had a chance to build something new. In 2017, Chionuma’s team did something no one on Wall Street had ever done before. They debuted a public market Social Bond offering for the nonprofit Local Initiatives Support Corp. (LISC), a 40-year-old community development finance institution (CDFI) dedicated to economic development and the revitalization of underinvested, low-income and low-wealth communities. Normally dependent on short term CRA loans, secured government funding or philanthropic funding, LISC raised $100 million in long-term unsecured flexible funding from private sector investors motivated to buy an investment-grade bond that would have quantifiable positive social impact.

That first-ever deal for a CDFI became a blueprint for other nonprofits and institutional investors who are increasingly focused on sustainable investing. “Through these innovative bond IPOs, Morgan Stanley planted the seeds which grew into a market that now provides over $750 million for community development,” Chionuma said. “And so now that story is out there with investors. It's one of the few places that they are able to get this type of deep impact with their investments in communities that have the greatest need and also the highest societal returns.”

Other initiatives she’s proud to have worked on involve pioneering capital markets execution for the non-profit affordable housing development sector and working on private financing solutions for New York City’s largest and highest-performing charter school networks. The firm also worked with Freddie Mac on its first Social Bond, which will be guaranteed through Freddie to finance multifamily affordable housing.

‘Best of Many Worlds’

Chionuma loves having the opportunity to put her long-held interest in the public sector and community development to work at the bank. “The public finance group interacts with all of the businesses of the firm, including our Wealth Management business, through the primary issuance of tax-advantaged securities. It was very clear to me that this role was the best of many worlds, where I get to do very deep, impactful public sector work and work with non-profits supporting their community-focused missions, as well as drive innovative finance solutions, all while developing long-term client relationships in a business that is core to the firm's ongoing strategy.”

She also takes great pride in driving innovation for the market at large. “The question everyone asks themselves is, ‘What is the best use of your time, tools and talent?’ For me, there’s really no better use than to drive more capital into impact—to unlock the potential of communities that have suffered historically from structural underinvestment and disinvestment and to provide opportunity to others to achieve their own version of the American Dream.”

The tools and talent, Chionuma always had. But the impact piece? Thanks to the Toigo Foundation—“It remains a very valuable organization for me, professionally,” she says—and thanks to the opportunities she found at Morgan Stanley, she was able to create impact, too.

Morgan Stanley is a global financial services firm and a market leader in investment banking, securities, investment management and wealth management services. With more than 1,200 offices in 42 countries, the people of Morgan Stanley are dedicated to providing our clients the finest thinking, products and services to help them achieve even the most challenging goals. Through its Global Sustainable Finance Group, Morgan Stanley seeks to support community development initiatives with debt, equity, and philanthropy.