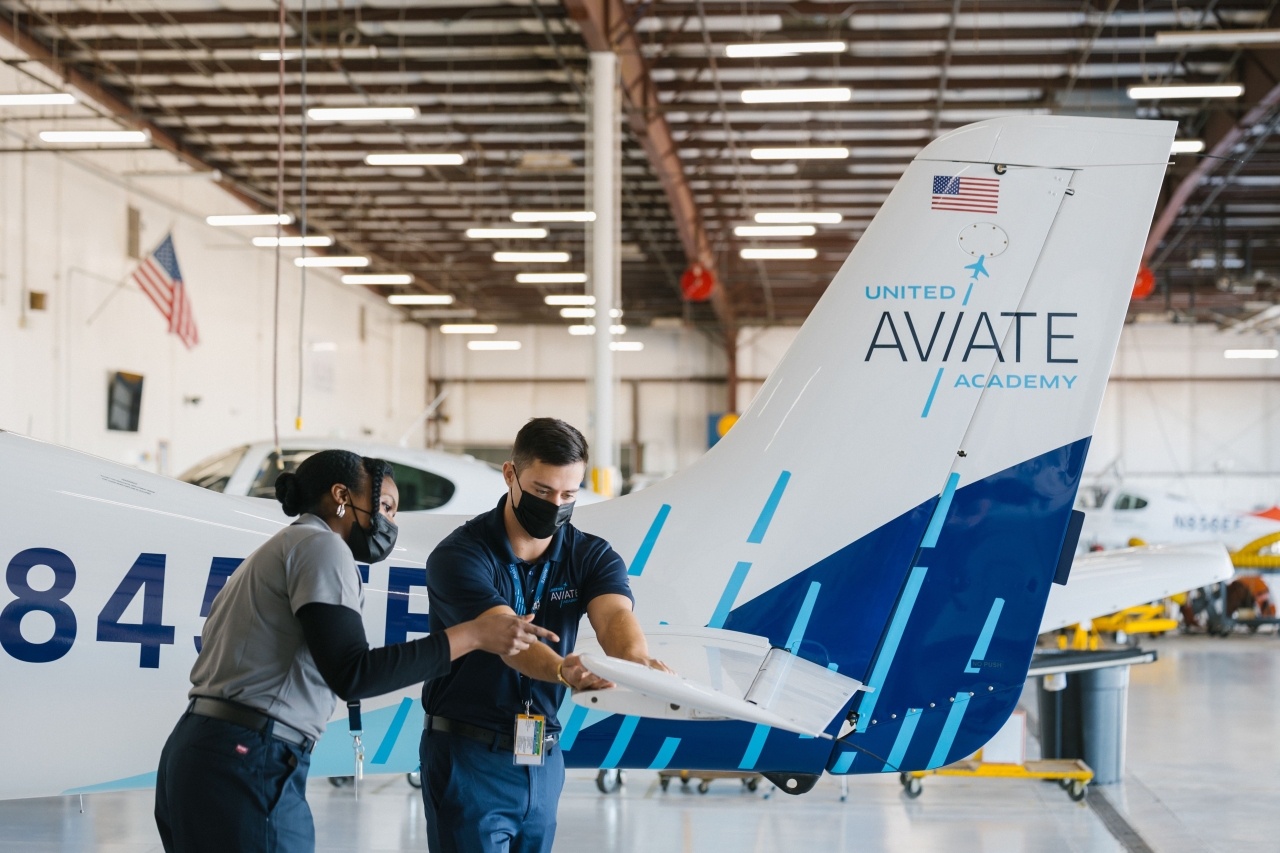 GOODYEAR, Ariz., January 28, 2022 /CSRwire/ - United, the only major U.S. airline to own a flight training school, officially opened United Aviate Academy and welcomed a historic inaugural class of future pilots, 80% of whom are women or people of color. United Aviate Academy is a key part of the airline’s goal to train about 5,000 new pilots at the school by 2030, with at least half women or people of color. This unprecedented training commitment will dramatically expand access to this lucrative and rewarding career while upholding United’s world-class safety standards.

Last summer, United unveiled its ambitious United Next strategy to revolutionize the United flying experience and introduce more than 500 new, narrow-body aircraft into its fleet to match the anticipated resurgence in air travel. United plans to hire at least 10,000 new pilots by 2030 to meet this need with about 5,000 of those coming from United Aviate Academy.

United Chief Executive Officer Scott Kirby and United President Brett Hart were joined today by Federal Aviation Administration Deputy Administrator Brad Mims and other government officials at the Phoenix Goodyear Airport to welcome the new students. The group also outlined United’s plan to help break down some of the barriers to entry through targeted recruiting, strategic partnerships and scholarship and financial aid solutions.

“Our pilots are the best in the industry and have set a high standard of excellence,” said Kirby. “Recruiting and training even more people who have that same level of talent, motivation and skill is the right thing to do and will make us an even better airline. I couldn’t be prouder of this first group of students and look forward to meeting the thousands of talented individuals who will pass through these doors in the years to come.”

Unfortunately, for many people becoming a pilot seems not only out of reach financially, but completely unimaginable. According to the U.S. Bureau of Labor Statistics, only 5.6% of pilots are women and 6% are people of color. Earning a commercial pilot's license in the U.S. can cost about $100,000 and becoming an Airline Transport Pilot requires 1,500 hours of flight time, which requires a significant commitment.

United and JPMorgan Chase & Co. have renewed last year’s commitment to fund nearly $2.4 million in scholarships for future aviators attending United Aviate Academy. The airline also directly works with the following organizations to educate prospects about the benefits of becoming a pilot and to find candidates for scholarship opportunities:

The United Aviate Academy expects to train at least 500 students annually as one part of United recruiting as the carrier works toward hiring at least 10,000 pilots by 2030. Aviation consulting firm Oliver Wyman estimates a worldwide pilot shortage of 34,000 aviators by 2025.

United Aviate Academy’s first class is undergoing a year-long training program that sets them up for a career that reflects United’s high standard of professionalism and deep commitment to delivering a safe, caring, dependable and efficient travel experience. After completing their training at the academy, students can build flight and leadership experience while working within the Aviate pilot development ecosystem at partner universities, professional flight training organizations and United Express carriers on their way to becoming United pilots.

“As a United pilot for more than 32 years, it's exciting to see these new students earning their wings and beginning their aviation careers, and I’m looking forward to them joining me on the flight deck one day,” said United Chief Pilot Mary Ann Schaffer. “We need more pilots and a more diverse pool of young aviators, and United Aviate Academy will help us achieve both goals.”

United worked closely with multiple organizations, cities, and elected officials to help make the academy a reality for aspiring pilots who otherwise may not have pursued a career in aviation. The airline extends its gratitude to Arizona Governor Doug Ducey and his office; the Arizona Commerce Authority; the City of Phoenix and Mayor Kate Gallego; and the City of Goodyear and Mayor Joe Pizzillo and the late Mayor Georgia Lord.

United is more focused than ever on its commitment to customers and employees. In addition to today's announcement, United has recently:

United’s shared purpose is “Connecting People. Uniting the World.” In 2019, United and United Express® carriers operated more than 1.7 million flights carrying more than 162 million customers. United has the most comprehensive route network among North American carriers, including U.S. mainland hubs in Chicago, Denver, Houston, Los Angeles, New York/Newark, San Francisco and Washington, D.C.  For more about how to join the United team, please visit united.com/careers and more information about the company is at united.com. United Airlines Holdings, Inc. is traded on the Nasdaq under the symbol "UAL”.