Swooping in to Save Prairie Birds of Prey

Alberta Birds of Prey Foundation focuses on rescue, release and education for birds and humans alike

Swooping in to Save Prairie Birds of Prey

Alberta Birds of Prey Foundation focuses on rescue, release and education for birds and humans alike 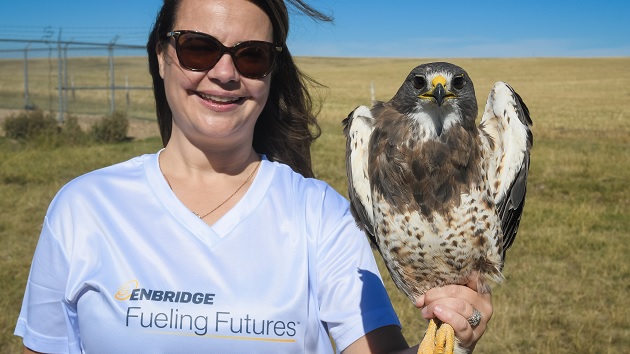 It started as backyard care for a few injured birds—and it’s developed into one of the world’s premier bird conservation facilities.

The launch of the Alberta Birds of Prey Foundation wasn’t total happenstance, however. From a young age, co-founder and managing director Colin Weir knew he was passionate about conservation and environmental learning.

“I was one of those people who wanted to try to save the world but didn’t know how that would take place,” says Weir. “I discovered falconry, and that sort of set my course in life . . . I wanted to combine my love for birds of prey with some type of environmental community service.”

Weir attended falconry school in England, which you may or may not recall as the widely popular medieval practice of training falcons to hunt and put food on the table for families.

Following this training, the Alberta Birds of Prey Foundation was later established in 1984 as a rescue and conservation facility located in Coaldale, Alberta. While efforts focused mainly on rescuing birds like hawks, falcons, eagles and owls, the co-founders had a longer-term plan to build a conservation facility to share their love and knowledge with the public.

With the Alberta Birds of Prey Centre built and opened to the public only six years later in 1990, Weir admits that the educational facility was a few decades ahead of its time in terms of conservation and environmental visionary planning.

As part of our commitment to conservation and sustainability, Enbridge made a $7,500 Fueling Futures donation to the Alberta Birds of Prey Foundation in late 2021 as part of a longstanding association with the group. The funding helped cover the costs of rescuing, caring for and finally releasing birds back into the wild in September.

Nearly 15 years ago, Enbridge first invited the Alberta Birds of Prey Foundation to a company event, with two to three birds in tow. The organization periodically offers these outreach experiences as a means of sharing its mission and generating needed income.

“It’s amazing to see the wonderment on peoples faces,” says Weir. “Where else can you touch the feathers on a live owl?”

This experience is not exclusive to private events—it can found at the Coaldale facility, which is fully wheelchair-accessible and open to all ages.

“We’ve had so many successes, but we have also faced a lot of adversity along the way,” says Weir. “There were a lot of skeptics who didn’t think we would see this through.”

With the added factor that the Alberta Birds of Prey Foundation is committed to remaining self-sustaining—that is, without government subsidies—one might agree that the odds weren’t stacked in their favor. But it’s clear today that the group’s focus and perseverance have resulted in a flourishing organization that successfully protects our beloved skydwellers.

People “really underestimated three things: our tenacity, our commitment, and the small group of people who believed in us,” says Weir. “We can’t do it without our supporters, so we are very grateful to Enbridge for its generosity and community investment in our facility.”

(TOP PHOTO: An Enbridge employee with a hawk during a September 2021 release of birds back into the wild near the Alberta Birds of Prey Foundation's facility near Coaldale, AB.)