How Can We Decarbonize Labs, Without Compromising Science?

Carbon reduction and lab requirements can be opposing forces. But pioneering efforts are revealing a roadmap to a healthier environment and better science.

How Can We Decarbonize Labs, Without Compromising Science?

Carbon reduction and lab requirements can be opposing forces. But pioneering efforts are revealing a roadmap to a healthier environment and better science. 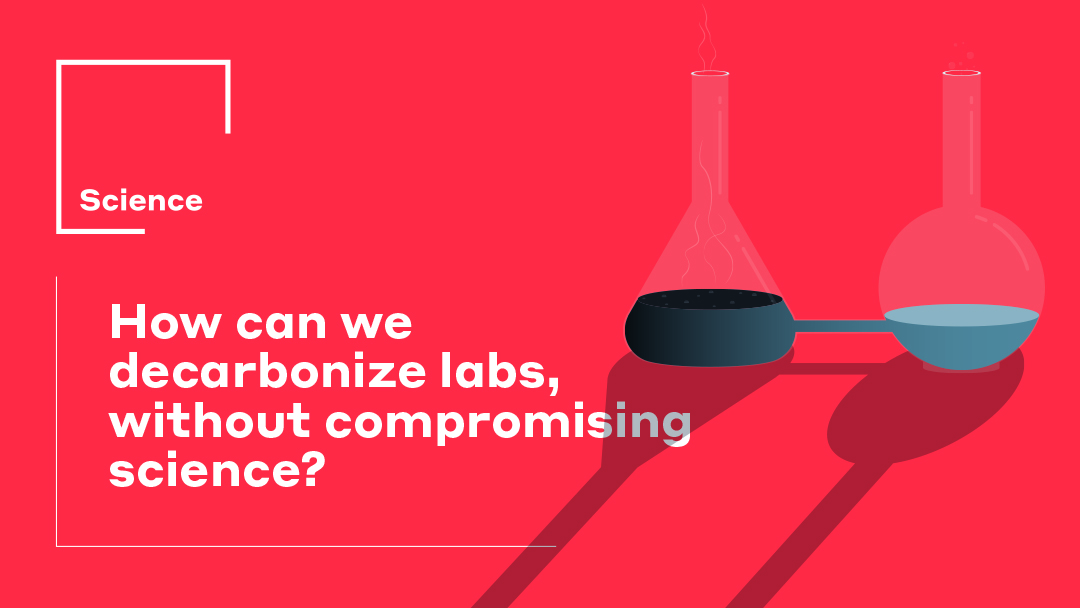 “High containment.” The phrase can induce anxiety even before you’re certain what it means — and the details offer little reassurance. High containment is a category of laboratory where scientists conduct diagnostics or research on very high mortality pathogens, conditions that necessitate elevated levels of scrutiny in operations and testing. Safe handling of those viruses or pathogens is a matter of genuine life or death, which means there’s little leeway to radically change processes and procedures to conform to environmental standards.

Cognizant of the need to reduce carbon emissions, one such lab, a WSP client, “is constantly evolving, being more efficient and looking at ways to reduce water and energy consumption,” says Leslie Gartner, senior VP of science and technology design, based in Atlanta. “But the number one criterion there is not energy efficiency. It’s containment.”

What happens when the march toward net-zero runs headlong into human activity that benefits health, welfare and conditions on Earth? That question is anything but hypothetical in scientific laboratories, which present some of the most daunting challenges to decarbonization. The nature of research and development conducted in labs can pit climate obligations against competing imperatives, from finding cures for deadly diseases to inventing materials that neutralize pollutants or reverse environmental damage.

In those scenarios, how can we reconcile conflicting priorities so that net-zero targets and the need for continued scientific and medical advances don’t work against one another?

Why labs are so difficult to decarbonize

Finding the answer begins with understanding the sources of greenhouse gas emissions in laboratories and why managing those sources in a lab is different from managing them in any other commercial building.

To begin, there’s the embodied carbon in the building’s construction and component materials – labs typically use large amounts of concrete, steel and glass. While alternatives such as timber are increasingly used in other kinds of buildings, lab environments need to remain sterile, cannot be subject to fluctuations in humidity or temperature, and must adhere to many other conditions that can be difficult to achieve without these carbon-intensive materials.

There’s also the matter of operational carbon, which looms especially large in labs that run 24/7 and must meet strict scientific protocols. The largest producers of emissions are the energy used to heat and cool the facility, and to power lab equipment and on-site waste disposal systems. An additional source of greenhouse gas emissions are leaks from refrigeration systems — which, although used in small volumes, have a disproportionate impact on global warming.

"On average, energy consumption per square meter is three to four times higher in laboratories than in a typical office building"

This means that when facilities planners — architects and mechanical, electrical, structural, plumbing and acoustic engineers — are designing or retrofitting sustainable labs and research campuses, they face all the obstacles inherent in traditional construction plus the additional complexities of keeping scientists safe, preventing contamination and meeting quality control measures so as not to compromise research integrity.

The challenge is different every time: labs are always bespoke and highly specialized to the activities taking place within them. An academic research institution that doesn’t handle infectious or hazardous materials has an easier path to net-zero: shifting from carbon-based fuel to electricity from renewable sources, for example. But even in those cases, facilities planning teams must be certain that alternative fuels can deliver the high levels of power that labs require. “We use gas for sterilization, and electricity is just not as efficient,” Gartner says. “The guts of the buildings — how they run and how they generate their electricity and energy — is where we're seeing the big change.”

The issue of alternative fuels comes up often as a constraint to more climate-friendly practices in labs, most notably in certain sectors. Davy points out that government authorities may require the use of certain types of energy in labs for highly regulated industries, such as pharmaceuticals. Variables can include tight controls on temperature or on environmental conditions where lab workers are handling hazardous substances, or clean room requirements that mandate frequent air changes or relatively low humidity. However, these historic and often arbitrary guidelines are being challenged, to discover whether the same product quality can be achieved using less energy.

It will always be easier to progress towards net-zero with a blank sheet of paper, but that’s not essential, according to Gartner. “There's a lot we can do: reduce the amount of energy that's needed, change the fuel mixes, increase use of electrification systems, reduce refrigerants — for existing buildings, getting to net-zero is about implementing an energy or water-zero strategy.”

He notes the work of the International Institute for Sustainable Laboratories, which uses a US peer-group database to maintain a Laboratory Benchmarking Tool through which labs can compare their energy use with that of similar facilities. Its guidance aids them to identify opportunities such as replacing freezers with newer, more energy-efficient models, which may even reduce the number of freezers needed to fulfill research requirements.

To that extent, upfront investments in sustainability can be offset by long-term savings, not only on energy but equipment and maintenance too. What sometimes escapes notice is that sustainability often aligns with compliance with quality and safety requirements by reducing reliance on energy-intensive processes. In the pharmaceutical sector, for example, moving from batch to continuous production improves product quality as well as reducing a facility’s environmental footprint.

"If you cut costs, you increase carbon. If you cut carbon, you tend to actually reduce costs. The business case for going net-zero is starting to be better understood and better articulated."

Claire Gott, Head of industry, WSP in the UK

That’s the business case for net-zero labs in a nutshell. As Claire Gott puts it: “We find our clients have this ambition and know they need to get there, even if they don't necessarily know how.” So, what does the process look like? Leslie Gartner recommends starting with basic benchmarks such as objectives and timeframe. One WSP client knew it could not reach net-zero in the short term, so instead considered what could be done in 10, 15 or 20 years. The team reviewed existing technologies and those expected to emerge, as well as alternate methods of decontamination or emerging fuel sources that may not yet work in every lab setup. Thinking about what could be done immediately and which solutions would unfold over the mid-term helped to define budgeting parameters to finance those future moves.

“The initial process is more familiar than you might think,” Gartner says. “You start out on familiar ground, but you end up with results that you have not achieved before.”

The goal is not just to achieve specified environmental targets, but to look more strategically to make a lab design Future ready. Davy explains how the concept was applied in a project for one of the world’s largest diagnostic manufacturers. WSP examined the impact of the supply chain on its operations, considered distribution challenges in different regions and the impacts of climate change on each, and then modelled different scenarios to help them become more resilient to future disruption.

Taking a flexible, long-term approach is particularly important on science buildings, because technologies that could become key later on may not be viable at the moment of design. Waste disposal — a hot-button climate issue in labs — is emerging as a proving ground for the future-ready mindset. Traditionally, it has meant incineration at temperatures of up to 1800°C, using natural gas as the fuel. Alternatives include chemical hydrolysis and hydrogen-powered furnaces that are now in the testing phase. “Incineration is still a valid process to deal with waste, but with the switch to hydrogen, it can become a lot greener,” Davy says. “We do a lot of projects in the design and delivery of hydrogen, as well as carbon capture usage and storage, so we can apply that to labs too, to enable them to accommodate electric and hydrogen in the future.”

Another area ripe for investigation is the data generated by labs, which can inform smarter building management and contribute to sustainability by maintaining optimal air pressure, temperature and light levels for experiments. The catch is that the systems that help labs function properly often don’t communicate with one another. Addressing the disconnect requires a new approach to interoperability — one that addresses security risks head-on. “That comes up in every client engagement that we have,” says Nicole Hammer, director of WSP’s innovation advisory practice for the central US region. “We must ensure that when we start to harness the power of the available data, we're doing it in a way that's in compliance with a client’s cybersecurity and network standards so that the entire design is robust and safe.”

As with other aspects of net-zero conversions, Hammer has clients start by identifying the desired outcome so that the building can be designed to capture data that will inform progress towards the goal. And here, too, solution development emphasizes being future-ready so that the lab is not limited in its ability to grow or change over time.

While innovation is not off the table for existing facilities, brand-new lab constructions are setting more ambitious standards. At the University of Nottingham in the UK, GSK has part-funded a carbon-neutral chemistry laboratory, which is built from natural materials and meets its energy needs from renewable sources such as solar power and sustainable biomass. It opened in 2017, and the excess energy generated will pay back the embodied carbon within its structure within 25 years.

Meanwhile, down the road in Cambridge, AstraZeneca has set a target of carbon neutrality within two to three years at its new R&D campus. To that end, it has reinvented the heating and cooling systems and installed the largest ground heat source pump in Europe. “If you make the investments early, and you target every piece of the building — including its structure, how it's made, as well as how the energy is provided — it's possible to get to a carbon-neutral position,” Davy says. “And even more aggressive than that, if you look at it holistically.”

But research organizations don’t necessarily need big-business budgets to finance meaningful change, he adds – the University of Glasgow carried out a complex refit of the chemistry laboratories in its heritage-listed Joseph Black building to achieve significant reductions in its energy and water use. “It is possible if you've got the right leadership and ambition,” he says. “That seems to be the constant.”