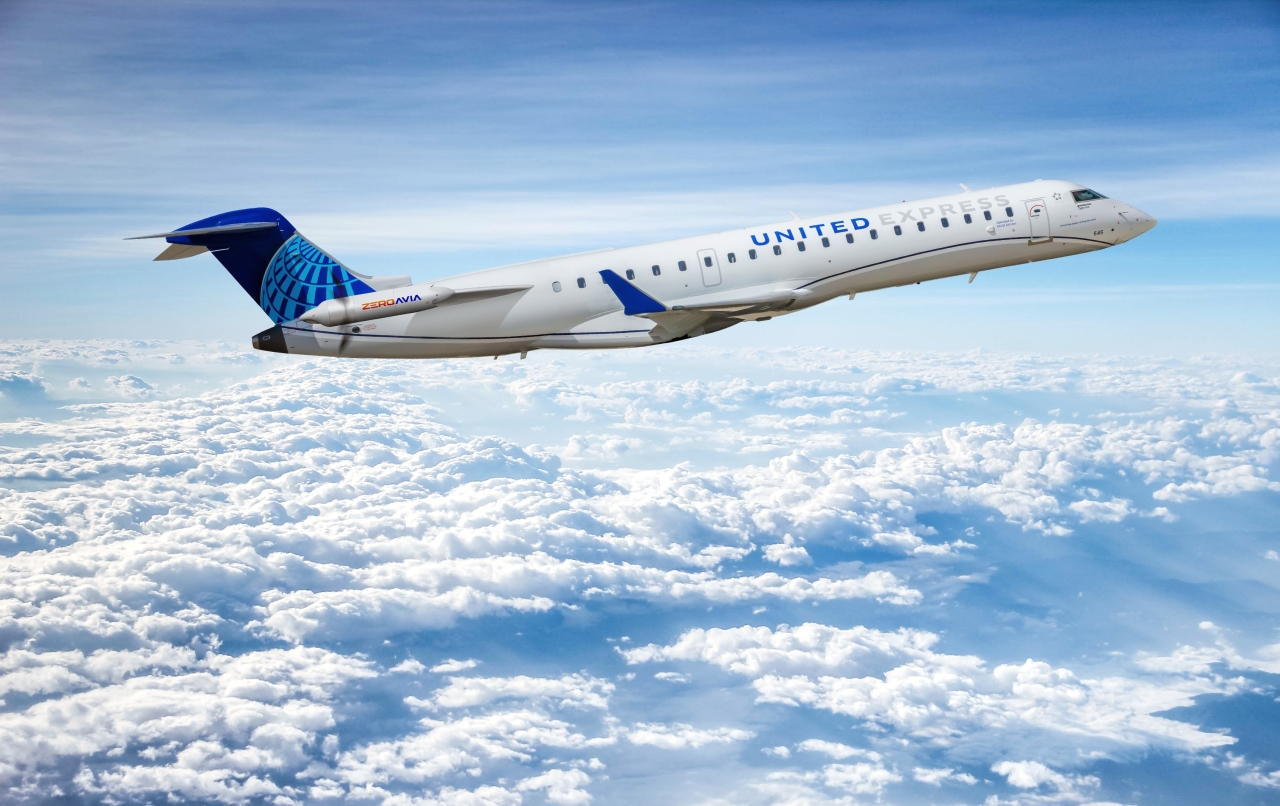 New equity stake in hydrogen-electric engine developer ZeroAvia gives United the ability to purchase up to 100 zero-emission, 100% hydrogen engines that could be used on United Express aircraft by 2028

United remains the largest airline to commit to hydrogen-electric aviation

CHICAGO, December 21, 2021 /CSRwire/ – United recently became the largest airline to invest in zero-emission, hydrogen-electric engines for regional aircraft, the latest move toward achieving its goal to be 100% green by reducing its GHG emissions 100% by 2050, without relying on traditional carbon offsets.

Through a new equity stake in ZeroAvia, a leading company focused on hydrogen-electric aviation solutions, United expects to buy up to 100 of the company’s new zero-emission, 100% hydrogen-electric engines (ZA2000-RJ). The engine could be retrofit to existing United Express aircraft as early as 2028. One potential use is on United’s unique CRJ-550, the only 50-seat aircraft which offers first class and other premium amenities, making this leading aircraft even better and marking another first for United.

“Hydrogen-electric engines are one of the most promising paths to zero-emission air travel for smaller aircraft, and this investment will keep United out in front on this important emerging technology,” said Scott Kirby, CEO of United. “United continues to look for opportunities to not only advance our own sustainability initiatives but also identify and help technologies and solutions that the entire industry can adopt.”

Hydrogen-electric engines use electricity created by a chemical reaction in a fuel cell to power an electric motor instead of burning fossil fuel. Because no fuel is burned, there are no climate-harming emissions or carbon released into the atmosphere when the engines are operated.

The ZA2000-RJ is expected to be used in pairs as a new power source for existing regional aircraft. Under the agreement with United Airlines Ventures, United will pursue a conditional purchase agreement for 50 ZeroAvia ZA2000-RJ engines, with an option for 50 more, enough for up to 50 twin-engine aircraft which would be operated by United Express partners once they are fully developed and certified by regulators as soon as 2028.

“This support by United, alongside our other forward-thinking partners, demonstrates the importance of hydrogen-electric propulsion in the future of sustainable flight,” said Val Miftakhov, founder and CEO and of ZeroAvia. “The United Express routes powered by hydrogen-electric aircraft will be enabling large numbers of passengers to take zero-emission flights well within this decade.”

ZeroAvia is accelerating development of its ZA2000 engine and will soon begin ground tests of its ZA600 in a 19-seat aircraft, with the aim of entering commercial service with this smaller engine by 2024. ZeroAvia’s roadmap calls for it to develop hydrogen-electric propulsion for progressively larger aircraft. In September 2020, ZeroAvia completed the world’s first hydrogen fuel cell powered flight of a commercial-grade aircraft. ZeroAvia has already secured experimental certificates for two prototype aircraft from the FAA in the United States and the Civil Aviation Authority in the U.K. and has passed significant flight test milestones.

Earlier this year, United announced a record-setting agreement to purchase sustainable aviation fuel from Alder Fuels and has now committed to purchase more than twice as much of this fuel as the rest of the world’s airlines combined.

These investments and the accomplishments below make United the global aviation leader in supporting technology used to sustainably power commercial aircraft:

United's shared purpose is "Connecting People. Uniting the World." In 2019, United and United Express® carriers operated more than 1.7 million flights carrying more than 162 million customers. United has the most comprehensive route network among North American carriers, including U.S. mainland hubs in Chicago, Denver, Houston, Los Angeles, New York/Newark, San Francisco and Washington, D.C. For more about how to join the United team, please visit united.com/careers and more information about the company is at united.com. United Airlines Holdings, Inc. is traded on the Nasdaq under the symbol "UAL".

This press release contains “forward-looking statements” within the meaning of the Private Securities Litigation Reform Act of 1995. All statements that are not statements of historical facts are, or may be deemed to be, forward-looking statements. Such forward-looking statements are based on historical performance and current expectations, estimates, forecasts and projections about our future financial results, goals, plans, commitments, strategies and objectives and involve inherent risks, assumptions and uncertainties, known or unknown, including internal or external factors that could delay, divert or change any of them, that are difficult to predict, may be beyond our control and could cause our future financial results, goals, plans and objectives to differ materially from those expressed in, or implied by, the statements. These risks, assumptions, uncertainties and other factors include, among others, the parties’ ability to satisfy certain post-closing conditions, any delay or inability of United Airlines to realize the expected benefits of the proposed transaction and that the proposed transaction will materialize on the terms or within the time frame described in this document. No forward-looking statement can be guaranteed. Forward-looking statements in this press release should be evaluated together with the many risks and uncertainties that affect United’s business and market, particularly those identified in the “Management’s Discussion and Analysis of Financial Condition and Results of Operations” and “Risk Factors” sections in United’s Annual Report on Form 10-K for the year ended December 31, 2020 and Quarterly Report on Form 10-Q for the quarterly period ended June 30, 2021, as updated by our subsequent Quarterly Report on Form 10-Q, Current Reports on Form 8-K and other filings with the Securities and Exchange Commission. The forward-looking statements included in this document are made only as of the date of this document and except as otherwise required by applicable law or regulation, United undertakes no obligation to publicly update or revise any forward-looking statement, whether as a result of new information, future events, changed circumstances or otherwise.