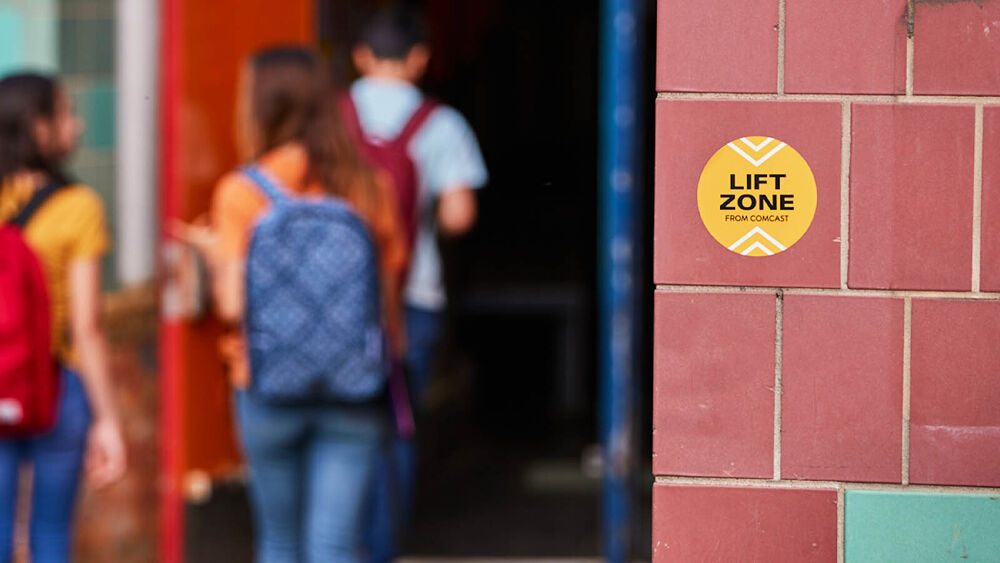 PHILADELPHIA, December 17, 2021 /CSRwire/ - Comcast announced that it has installed free WiFi in its 1,000th Lift Zone in St. Paul, Minnesota at The Sanneh Foundation’s Seton Center.

The company plans to mark the occasion with a $50,000 grant to help support the organization as it rebuilds after being set back by an arsonist. The company also set a new goal to install 250 additional Lift Zones before the end of 2022. Lift Zones are part of Project UP, Comcast’s comprehensive, ten year, $1 billion commitment to help build a future of unlimited possibilities.

Together with our nonprofit partners, like The Sanneh Foundation, we have built safe spaces for students and families to connect to the Internet.
Kalyn Hove, Regional Senior Vice President, Comcast Twin Cities Region

Originally intended as a multi-year effort, earlier this year the company accelerated its roll-out plans in response to overwhelming public support. Lift Zones came along at a critical time, providing free WiFi access within select recreation, community, and senior centers, as well as public housing computer labs. Students used them for remote learning, even when schools were closed. Adults, too, benefited because Lift Zones also offer access to hundreds of hours of free digital skills training to help people learn how to get online for remote working, job hunting, and finding telehealth services.

As announced December 6th, Comcast also plans to provide free WiFi at up to 100 veteran-serving locations nationwide. The Lift Zones effort complements Comcast’s Internet Essentials program, which, since 2011, has connected a cumulative total of more than 10 million low-income people to the Internet at home.

“Whether at home or in a neighborhood community center like the Sanneh Foundation, Comcast is committed to helping connect the unconnected,” said Broderick Johnson, executive vice president, public policy and executive vice president, digital equity, at Comcast Corporation. “Lift Zones, where we provide free WiFi access to neighborhoods in need, are an extension of our efforts to address digital equity for everyone who needs the Internet for homework, for jobs, or learning digital skills.”

“I commend Comcast for the positive impact they’ve made in the Twin Cities community with Lift Zones and Internet Essentials,” said Tony Sanneh, founder and CEO, The Sanneh Foundation. “The need for connectivity has never been greater and both programs have been extremely beneficial to our families through our partnership with Comcast.”

The Sanneh Foundation’s mission is to empower youth by supporting and promoting educational attainment and providing programs that strengthen physical health and social and emotional development. The organization draws hundreds of students to after-school and summer programming at its two facilities in St. Paul, the Conway Center and the Seton Center. In addition to sports and enrichment programs, each year The Sanneh Foundation serves 330,000 warm and healthy meals to youth and their families. Warm dinner is available 7-days a week, and lunches are available during out-of-school days and weekends.

The Conway Center was the very first Lift Zone Comcast installed. It opened in the Twin Cities in September 2020 and was being used by up to 150 students per day with supervised, online schooling and learning support. During the pandemic, Comcast also brought WiFi to the center’s outdoor athletic dome so it could be used for an online learning facility as well.

In early 2021, the Conway Center was damaged by arson, causing the center to close for four weeks. The Sanneh Foundation had to quickly shift operations to their newest location at Seton Center to host scheduled free youth sports camps and food distribution for those in need. Comcast swiftly moved in to bring service to the organization’s new location, making it fully operational. A Lift Zone was recently established at Seton Center for older youth focused on career readiness and workforce development, making it Comcast’s 1,000th in the nation.

“So much of life and work happens online,” said Kalyn Hove, Regional Senior Vice President, Comcast Twin Cities Region. “Together with our nonprofit partners, like The Sanneh Foundation, we have built safe spaces for students and families to connect to the Internet.”