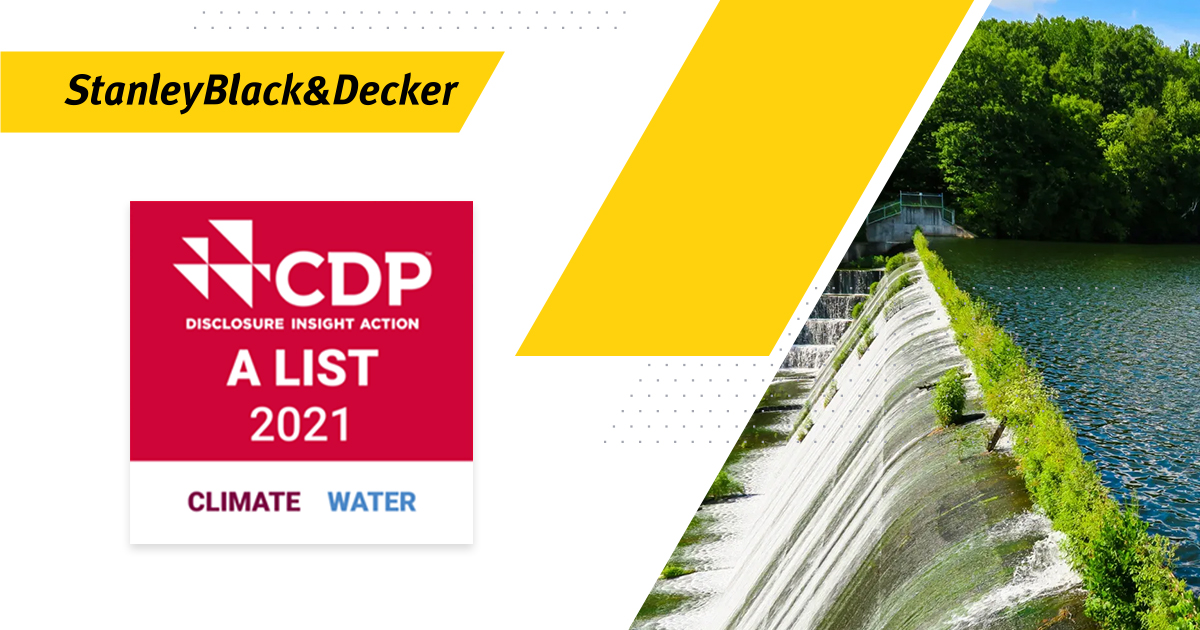 Stanley Black & Decker is one of 40 companies that achieved a double 'A' out of nearly 12,000 businesses that were scored based on data submitted through CDP's questionnaires in 2021. The company was one of 200 companies that made the 2021 climate change 'A List' and one of 118 companies named to the water security 'A List'.

"Environmental, Social & Governance (ESG) is at the core of how we operate as a global corporate citizen and we are committed to being a force for good to help create a more sustainable world," said Stanley Black & Decker's Corporate Responsibility Officer, Deb Geyer. "We are honored to have our efforts recognized with this achievement. From large-scale solar projects, to boiler and chiller upgrades, LED light retrofits and waste heat recovery initiatives, we are dedicated to working towards achieving cleaner water, minimizing waste generation and landfilling, and reducing our greenhouse gas emissions."

CDP's annual environmental disclosure and scoring process is widely recognized as the gold standard of corporate environmental transparency. In 2021, over 590 investors with over $110 trillion in assets and 200 major purchasers with $5.5 trillion in procurement requested that companies disclose data on environmental impacts, risks and opportunities through CDP's platform. A record-breaking 13,000 companies responded.

"Many congratulations to all the companies on this year's A List," said Paul Simpson, CEO of CDP. "Taking the lead on environmental transparency and action is one of the most important steps businesses can make, even more so in the year of COP26 and the IPCC's Sixth Assessment Report. The scale of the risk to businesses from climate change, water insecurity and deforestation can no longer be ignored, and we know the opportunities of action far outweigh the risks of inaction. Leadership from the private sector is essential for securing global ambitions for a net-zero, nature positive and equitable world. Our A List celebrates those companies who are preparing themselves to excel in the economy of the future by taking action today."

A detailed and independent methodology is used by CDP to assess these companies, allocating a score of A to D- based on the comprehensiveness of disclosure, awareness and management of environmental risks and demonstration of best practices associated with environmental leadership, such as setting ambitious and meaningful targets.

The full list of companies that made this year's CDP Climate Change and Water Security A Lists are available here: https://www.cdp.net/en/companies/companies-scores

Stanley Black & Decker's Corporate Social Responsibility strategy ties the company's purpose – For Those Who Make the World – with the United Nations' 2030 Sustainable Development Goals. The strategy focuses the company's efforts on three key pillars: empowering makers, innovating with purpose and creating a more sustainable world. By 2030, Stanley Black & Decker plans to enable 10 million creators and makers to thrive in a changing world, innovate our products to enhance the lives of 500 million people, and go beyond carbon neutral in its global operations, meaning its carbon capture is greater than its carbon emissions. To achieve going beyond carbon neutral, Stanley Black & Decker is investing in carbon capture technology, has set targets to reduce its supply chain emissions by 35% by 2030 and is working towards mapping its water risks and setting context-based targets to reduce water insecurity throughout its operations.

In 2021, Stanley Black & Decker released its first consolidated Environmental, Social & Governance report, "A Force for Good," which highlights all aspects of the company's sustainability and societal efforts and clear governance practices. The full report is available here.

In addition to the CDP's Water and Climate 'A List', Stanley Black & Decker has been named to the Dow Jones Sustainability World Index (DJSI) and recognized with the Environment+Energy Leader Award.

About Stanley Black & Decker:
Headquartered in New Britain, Connecticut, Stanley Black & Decker, an S&P 500 company, is a leading $14.5 billion global diversified industrial with 56,000 employees in more than 60 countries who make the tools, products and solutions to deliver on its Purpose, For Those Who Make The World. The Company operates the world's largest tools business featuring iconic brands such as DEWALT, STANLEY, BLACK+DECKER and CRAFTSMAN; the world's second largest commercial electronic security company; and is a global industrial leader of highly engineered solutions within its engineered fastening and infrastructure businesses. Learn more at www.stanleyblackanddecker.com.