Thumbi Ndung'u on Thinking Beyond Lifelong Treatment in HIV

Thumbi Ndung'u on Thinking Beyond Lifelong Treatment in HIV 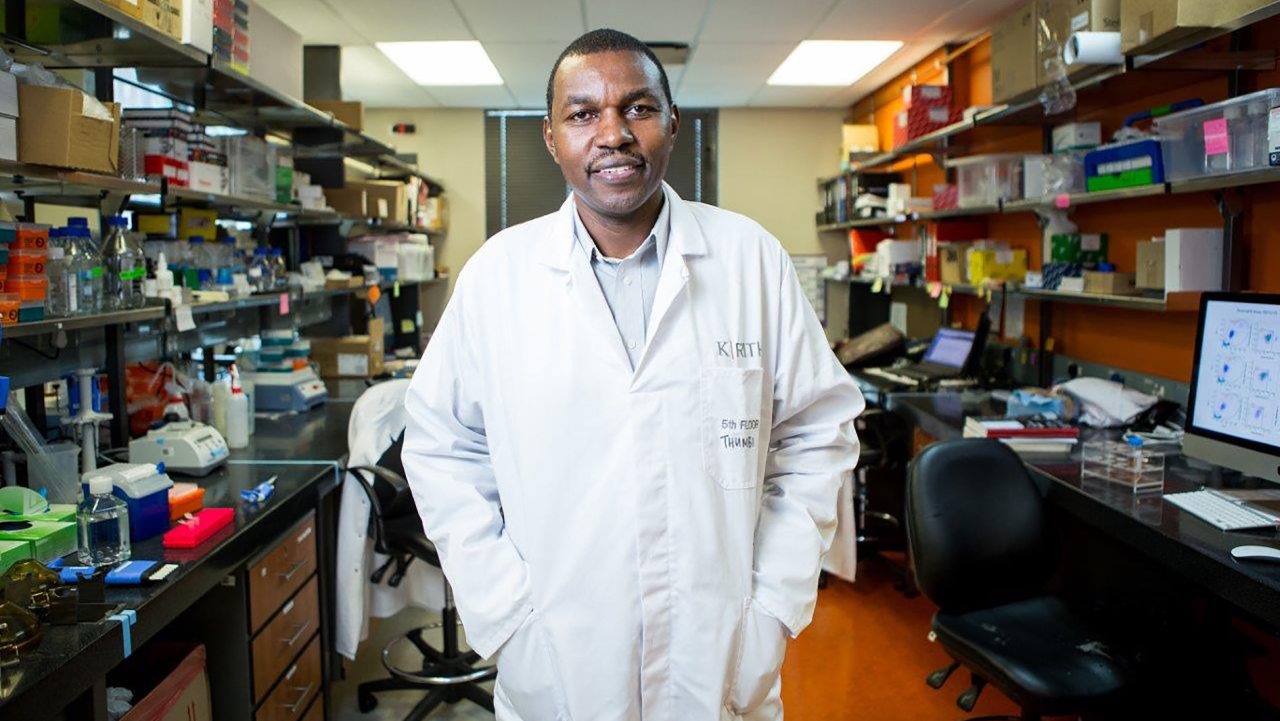 Forty years into the epidemic, African virologist Thumbi Ndung’u is helping map out a plan to achieve a functional cure of HIV. It’s a daunting challenge, yet he believes the evidence and tools can be there in the future to produce ways to eliminate the lifetime burden of antiretroviral therapy and help control the epidemic.

“I work closely with people living with HIV and they always say they wish for a cure,” he says.

The Kenyan-born scientist, who was part of a Gilead-sponsored symposium on the topic at the International AIDS Society Conference in July, says he began to seriously consider the possibility of an HIV cure more than 10 years ago. At the time, major vaccine trials were failing and expanded prevention options weren’t on the horizon. Many people in his adopted home of South Africa were starting antiretroviral therapy, facing a lifetime of daily pill-taking. They implored him to find new options.

“There are a lot of scientific unknowns,” says Thumbi, Director for Basic and Translational Science at the Africa Health Research Institute in Durban, South Africa. “But I think the way to overcome this is to do the kinds of studies we are doing to gain knowledge. Even if the studies don’t work, we move the needle forward to gain a new understanding.”

His work with so-called “controllers” suggests a functional cure is technically feasible. These are the rare individuals living with HIV who for unknown reasons have the natural ability to control viral replication without ever taking antiretroviral therapy. Another rare group of individuals can control HIV replication once they interrupt therapy after prolonged treatment. He says “this indicates something is going on in the body that we need to understand. We don’t understand whether it’s the immune system or some other biological mechanism that silences the virus in the body.”

Thumbi recognizes there is not full agreement in the HIV community around research priorities. Some in public health, in particular, question whether we should be investing in cure research when there are good antiretroviral therapies. But Thumbi notes there are declining resources for these therapies in many areas of the world, and other factors make the current treatment options less than ideal for people living with HIV.

“There is still a lot of stigma around HIV, and for those being treated, it can be exhausting to have to take a pill every day for the rest of your life,” he explains.

Thumbi’s plan is a multi-pronged approach that would include public and private partners working in tandem with the HIV community. To that end, he’s currently collaborating with Gilead and the National Institutes of Health (NIH) on a clinical trial involving young women living with HIV in South Africa – a first-of-its-kind study among this disproportionately affected population in a region where HIV is still highly prevalent.

The study is aimed at those individuals who initiate antiretroviral therapy in the early, acute phase of infection. The researchers will test a combination regimen comprised of a Gilead investigational therapy that activates the body’s antiviral immune response and two investigational products being developed by the NIH. These antibodies may directly inhibit the virus from infecting new cells while also enhancing other antiviral immune activities.

“I think this will be a milestone study because it seeks to do a potential cure intervention in one of the places where lifelong access to treatment may be problematic,” Thumbi says.

As Thumbi and scientists around the world continue their quest towards a functional cure, he stresses the importance of involving people affected by HIV in the development and execution of these trials and focusing on areas that would benefit from greater investment and support. It is critical, he says, for those in the field to understand people’s needs and to ensure affected communities “believe in the work you’re doing.”

“If you’re going to deal with a global problem, you need to go where the core of the problem is and earn the people’s trust,” he concludes.