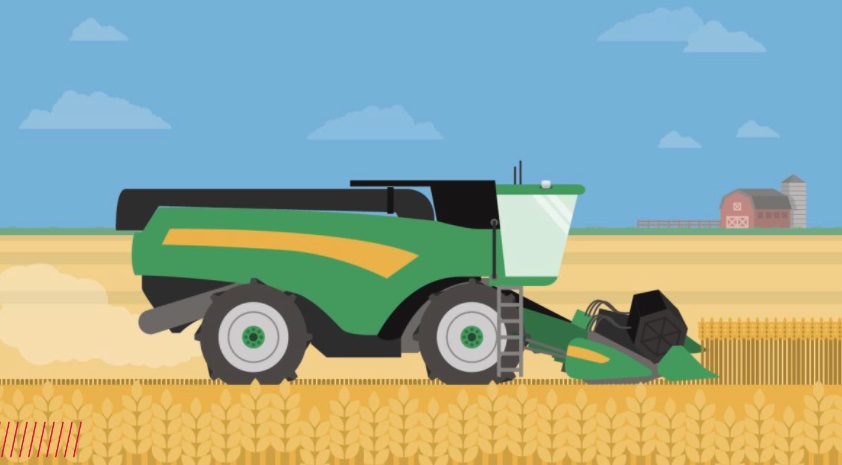 Agriculture has made incredible strides over the last 10,000 years—and the pace of innovation has only accelerated in the last couple decades. Take a look at how farming technology has evolved throughout the past 60 years.

Aided by significant advancements in technology, farming innovation really began to pick up during the second half of the 20th century and into the beginning of the 21st century. Today, these ongoing developments are growing exponentially, forever changing how farmers work and what we can all accomplish through agriculture.

In the mid-1940s U.S. Vice President Henry Wallace spearheaded a program to help developing nations feed their growing populations. The program included four scientists, one of whom was Dr. Norman Borlaug.

Using traditional plant breeding methods, Borlaug started a growing process that allowed plants to thrive with new irrigation and crop management techniques. By the 1960s, the benefits of what was nicknamed the “Green Revolution” were apparent when successful new wheat varieties were made available in countries across the globe.

The first twin-rotor system combine was created by Sperry-New Holland. This allowed crops to be cut and separated in one pass over the field. For corn, it not only separated the husk and ears, but also shelled the kernels and chopped the stalks, saving considerable amounts of time, energy and resources for farmers.

Scientists working at Monsanto Company became the first in the world to genetically modify a plant cell. The team used Agrobacterium to introduce a new gene into the petunia plant and announced their achievement the following year. Within five years, these researchers planted their first outdoor trials of a genetically modified crop – tomatoes that were resistant to insects, viruses and crop protection solutions. The Agrobacterium method first used in 1982 is still in use today by Bayer scientists, as well as those working throughout the entire agricultural industry.

For the first time, farmers were able to use satellite technology to see their farms from overhead. This new perspective enabled them to collect unprecedented insights to better track their field’s performance and strategically plan for next season based on their farm’s data.

After years of testing for safety and performance, the first genetically-modified row crops became available for farmers. In addition to developing cotton that could better protect itself against damaging insects, the newly introduced soy crop was developed alongside crop protection solutions that enabled farmers to specifically target invasive weeds that compete for land, water, sunlight and soil nutrients.

Like many people, farmers around the world started carrying mobile devices, which allowed them to stay connected to colleagues while in the field. This also meant they now had access to data while on-the-go. In addition to the unprecedented ability to order seed or fertilizer at any time or in any place, this also allowed smallholder farmers to access crucial agronomic advice and secure fair market pricing to help protect their livelihoods.

Through access to real-time data, farmers are making better-informed decisions that allow them to use resources more sustainably. FieldView™ platform is a digital platform that brings together data collection, agronomic modeling and local weather monitoring, giving farmers a better understanding of their fields and enabling them to plan for better harvests and make decisions that can also benefit our planet. With such detailed insight into their fields, farmers can even track the amount of carbon they store in their soil—a critical step in fighting climate change.

Advancements in robotics and data analytics have made incredible strides to build a more productive—and resilient—global food system. While these digital innovations are helping improve plant breeding, the applications of these technologies are endless. For example, by combining data analytics and hybrid breeding processes, short-stature corn was developed to stand at the ideal height to avoid greensnap and pair perfectly with combine equipment during harvest. That’s a huge step forward in preventing food loss in the field.

Around the world, farmers are exploring the potential of indoor growing spaces. In addition to insulating crops from environmental pressures such as pests, disease and extreme weather events, indoor farms allow farmers to grow using considerably less land and far fewer resources. It also changes where humanity can grow food. Similar closed-loop systems are being piloted in the desert (such as our Marana Greenhouse), in local urban areas and even the stratosphere—a fundamental advancement necessary to drive a more sustainable future on Earth as well as deeper explorations into space.

Agriculture has come a long way—and there’s much more on the horizon. That’s because many of humanity’s most important solutions haven’t been invented yet. By finding new ways to advance agriculture, we’re discovering answers to tomorrow’s questions. And with every step forward, we’re collectively marking the next milestones in an unfolding history of innovation we can all be proud of.