The ViacomCBS Impact Awards recognize employees who exemplify our values and are making differences in their communities. This year we are proud to award five winners who will have $10,000 donated to an organization of their choosing.

When the pandemic was isolating patients early last year, Laura DiMarco sought to bring human connection and unity to hospitals and homes all across the tri-state area. After Laura learned that the highly contagious nature of coronavirus forced so many patients to fight the virus on their own in the ICU, she felt incredibly helpless. That was until Liz, an ICU nurse in Long Island, and Zina, a friend in Dubai, gave Laura a call. With Liz’s idea and Zina’s business sense they created a solution for patients in isolation. Many nurses were providing their cellular devices in zip bags to patients so they can contact their loved ones; however, these efforts weren’t sustainable considering the highly contagious virus. Laura and her friends worked to set up a GoFundMe to source, distribute, and sanitize iPads. The story struck so many people that Jeannie’s Fund raised $40,000. As the iPads were distributed, Laura shared stories of patients using the technology to read bedtime stories to their grandkids or sing happy birthday to celebrate virtually.

“There is no better motivator than love and human connection,” Laura tells us. Jeannie’s Fund is named after Laura’s mother, Jeannie Tomaselli, a beloved nurse who used Facetime to stay connected with loved ones while she was immunocompromised. Jeannie loved people, and she took every chance to strengthen her connection with families. In honor of Jeannie and her legacy, the Fund enhanced the meaning of community in a time of fear and isolation.

For Laura, the ViacomCBS community was instrumental in her service, “Jeannie’s Fund would have never achieved what it did without the help of my Showtime family.” This example of community was important for Laura to exemplify to her kids. She wants them to know what it is like to be a person in service of others. Laura recommends saying yes to every opportunity, because timing will always work itself out. “If it is in the spirit of service and love, it is always a good idea.”

Laura’s service and motivation to inspire her own kids is ultimately a beautiful ode to her mother, Jeannie, and her legacy. Although coronavirus has set a precedent of human isolation, community and love triumphed through Laura’s immense efforts.

From early February to June, Adrienne made about 1,500 COVID-19 vaccine appointments for people who needed them. Adrienne was initially approached by a neighbor asking if she knew how to book a vaccine, because they’d found the process challenging and knew Adrienne was well-informed. After she helped with that request, others began requesting help as well.

In mid-February, Adrienne met Liz Schwandt who had been doing the same thing in her neighborhood with her friend Julee Baber Brooks. Liz and Julee were in the process of organizing volunteers to widen the scope of the work. Liz called the group GOTSLA (Get Out the Shot Los Angeles). Since Adrienne is a Mexican American Spanish speaker, most of the appointments she made were for Spanish speakers, but GOTSLA proceeded to book about 20,000 appointments in six different languages across Los Angeles and San Bernardino Counties. Their appointment-making workflow helped mitigate language barriers, limited computer access, and long work hours. They also showed up at appointments for anyone who needed some support in person.

Support from ViacomCBS helped kickstart their mobile vaccine unit program, and they are now also training medical professionals to have compassionate conversations with patients who have concerns about taking the vaccine. 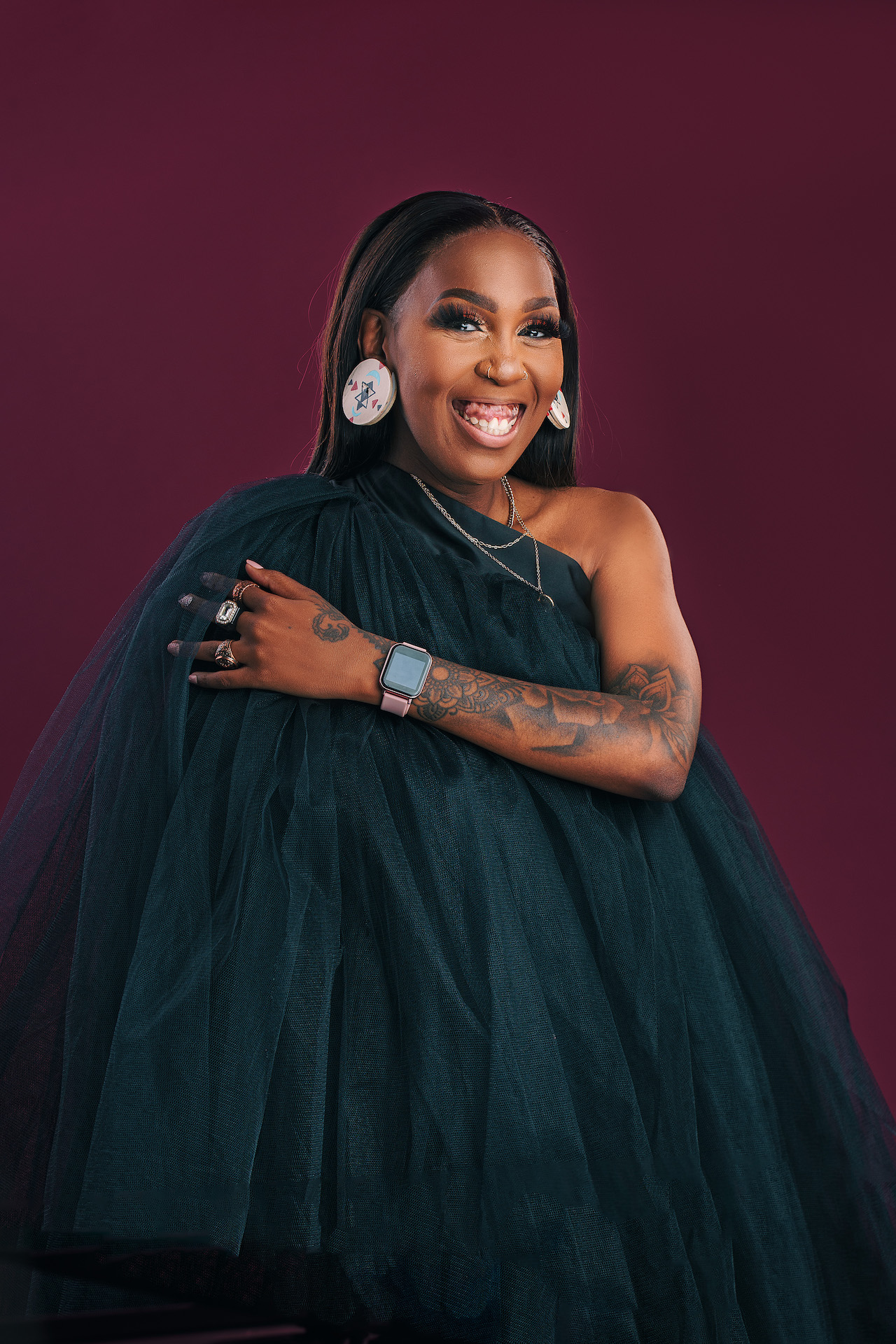 In March 2021, the #R10GoesALongWay initiative, which raises funds for students, took South African social media by storm. At the center of the initiative, was Ayanda Mhlongo, who believed in the country’s students. In protest over many issues, including the financial exclusion of around 6,000 students due to historical debt, students took to the streets for a month. In solidarity, Ayanda and her friends, Lasizwe, Sibu Mabena, and Takkies created the R10 Goes a Long Way initiative. Their initiative raised funds through crowdfunding while raising awareness of the negative impact non-funding has on disadvantaged students. Not only did the initiative support a truly important cause, but the messaging was highly engaging and motivating. The giving back piece became fun through 3 hours long Instagram Live sessions, which incorporated celebrities and digital influencers all across the African continent. Ayanda’s efforts not only raised awareness of a cause that supports students, but they also boosted morale and created a fun experience for the community.

Ayanda’s motivations come from her father, who recently passed away due to COVID-19. He served on various boards and formed a number of businesses, all of which he could’ve opted to pursue as a full-time leader. But instead, he chose to dedicate much of his life to service, working in the Social Development department of South Africa. He spent every single day visiting and communicating with various organizations, so they could receive funding from the Social Development department. His impact inspired Ayanda to follow in his clear footsteps. Ayanda tells us that “[COVID has] made the world smaller,” and “I really want people to understand that giving back can be fun, that it is fun, and that the fulfilment of volunteering and getting to help people is one of the most fulfilling things we’ll ever get to do while we’re on this earth.”

Now that geographic boundaries pose less of a limitation, the sky is the limit in terms of the impact volunteers can have on their community. When the initiative hit the R2 Million mark, the community was joined in the celebration on Instagram, “We all cried, rejoiced, and had 10,000 people on the Instagram Live celebrating with us. We had excited students, who couldn’t believe that we did that for them. BEST FEELING EVER!” Ayanda’s story is a joyous example of the impact community can have on its future leaders. To further support the students within her community, Ayanda’s donation will go to Fundi, an education financing organization in South Africa.

For Josh Venkataraman, the words of Gilbert King’s Pulitzer Prize-winning book, Devil in the Grove: Thurgood Marshall, The Groveland Boys, and the Dawn of a New America inspired action. After reading the book in college, Josh was inspired by the work of Thurgood Marshall. Just as Marshall had argued the civil rights case of the Groveland Four, Josh took it upon himself to posthumously exonerate the Groveland Four, who were falsely incarcerated in his home state of Florida. The families of the Four had 70 years’ worth of fighting under their belt, so Josh took various approaches from petitions and publicizing the story to contacting representatives. After four relentless years, Josh witnessed the Florida cabinet granting pardons to all four men

“Change doesn’t come overnight,” Josh tells us. The victory came as a result of Josh’s efforts in championing this cause by collecting 10,000 signatures, drafting press releases, contacting Florida senators, and providing co-sponsors, all with 70 years of fighting on behalf of the victims’ families. The ripple effect of community involvement and initiative leads to large scale change. Josh believes there are numerous ways to get involved with community organizing and efforts. It all starts with making a personal connection with someone in your community. He recommends starting small and thinking about the inequities you see around you because “chances are, you will find like-minded people who want to create change, and you will be more effective when working with other people.”

Although COVID may have put a block on in-person efforts, Josh is a firm believer that we have all the tools we need to create impact with technology. Above all, in a time of isolation, volunteerism is instrumental to feel part of a larger community. As an Impact Award winner, Josh will be donating to the Big Brothers Big Sisters of Broward County, an organization that provides a volunteer-supported mentoring network. As Josh continues to memorialize the words of Thurgood Marshall, he expresses that “it means the world to be supported by my organization.” The Impact Award donation will go a long way to support Josh’s home community.

Natasha Wickers is a champion for diversity and inclusion at ViacomCBS. She serves as co-chair of Fusion, the ViacomCBS UK employee resource group that promotes and celebrates cultural diversity. Not only does Natasha bring energy and enthusiasm to Fusion, but she also serves on multiple Racial Equity taskforces. Whether it be through organizing cultural heritage months or connecting BIPOC talent to ViacomCBS, Natasha is a fierce advocate for empowering voices of color. Her work within the Racial Equity taskforces has helped the company enhance the lives of its employees and improve the quality and representation of its output.

In addition to her work within the company, she also positively impacts the wider creative community. Natasha has been heavily involved with the Victor Adebodun Foundation since its creation. This charity supports emerging talent from African and Caribbean backgrounds, specifically those who dream of getting into the TV and film industry but lack access to the network or opportunities. The overarching goal is to achieve positive, meaningful change at both an individual and cultural level.

Natasha’s leadership and inspiration come from her family. The Victor Adebodun Foundation was created to continue her late husband’s legacy and now supports the dreams of diverse talent interested in the entertainment industry through mentoring, training, and access to employment. Natasha’s unparalleled enthusiasm comes from her desire for her daughter and their generation to “grow up and in a more equal, safer and accepting world for all.” Representation work is invaluable to her, “I don’t want them growing up to believe that “you can’t be what you can’t see.” They should be able to see themselves everywhere, as they find their place in this world.”

Volunteerism efforts have enhanced Natasha’s compassion, and she hopes to pass those values down to her daughter. For Natasha, this past year has truly, “highlighted the compassion within society and helped people gain perspective and understand the value of helping people in need.” She encourages those who have seen social injustices this past year alongside the pandemic to think about volunteering and ensure they all have a support network to pass the baton, since volunteerism work is exhausting yet empowering.