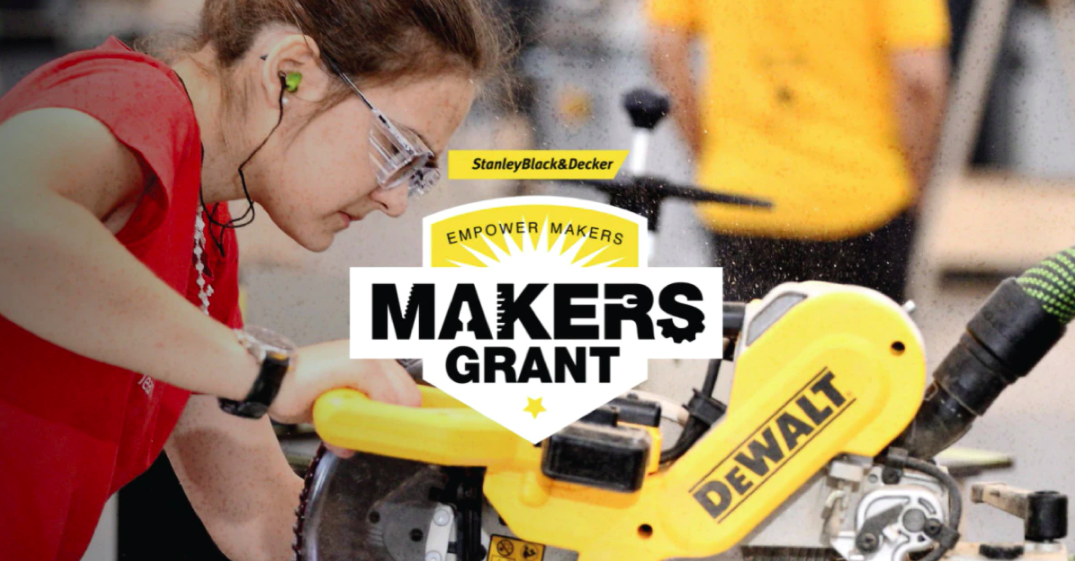 NEW BRITAIN, Conn., September 14, 2021 /CSRwire/ - Stanley Black & Decker (NYSE: SWK) announced today it is launching a 5-year, up to $25 million commitment to fund vocational skills training and reskilling programs in the construction and manufacturing sectors. Beginning Oct. 1, nonprofits around the globe can apply for grants as part of the “Empower Makers” Global Impact Challenge. The program is a critical component of Stanley Black & Decker’s corporate social responsibility program that includes a goal to empower 10 million makers by the year 2030. The Impact Challenge is expected to skill and reskill up to 3 million makers over the next five years.

Due to a lack of skilled trade workers, there are 430,000 open construction jobs in the U.S. alone1, and 10 million unfilled manufacturing jobs globally2. The pandemic has exacerbated this problem with millions of workers displaced since early 2020. In addition, the shift to remote and hybrid learning significantly impacted career and technical education (CTE) schools and classes, which rely heavily on hands-on learning. Almost 60% of CTE administrators reported lower enrollment in their programs for 20213.

“Stanley Black & Decker is for the makers, the builders and the craftsmen, those out doing the hard work to create the world around us and build a better future for themselves, their families and their communities,” said Stanley Black & Decker CEO, Jim Loree. “Over the last several decades, vocational schools and careers in the trades have been overshadowed, despite the excellent, well-paying jobs and career paths they offer. Our goal is to recognize and advance those organizations that are working to create the skilled workers and tradespeople of the future that our society needs. For those workers displaced by the pandemic, especially women, people of color and veterans, we want to encourage them to trade up to a career in the trades.”

Stanley Black & Decker aims to change misconceptions about skilled trade jobs, including the notion that these careers are not financially rewarding. A report from Rock The Trades, shows that many workers in skilled trades earn much more than the U.S. national average salary, $53,000, including electricians who can make up to $96,000 per year or aircraft mechanics who can make more than $100,000 per year. Meanwhile, the average cost of a four-year college degree is $127,000 vs. $33,000 for a trade school program4, and the average repayment time for a $127,000 debt is 21 years – time that a trade professional could be earning in their career5.

“Stanley Black & Decker’s support of the skilled trades is fantastic for the nonprofit community,” said Shelley Halstead, Founder of Black Women Build in Baltimore, MD, which trains Black women in carpentry, electrical and plumbing skills by restoring vacant and deteriorated houses in West Baltimore. “Organizations like ours work really hard to make an impact in our communities and provide the training for women to have fulfilling careers. But it’s pretty much impossible without financial support from companies or individuals who believe in what we do. We will definitely be applying for an Impact Challenge grant so we can introduce more women and minorities to the trades and close the skills gap.”

For resources on workforce development education and industry insights, visit Rock The Trades.

This year Stanley Black & Decker’s “Empower Makers” Global Impact Challenge will award up to $5 million in grants to nonprofits supporting trade workforce development initiatives. Submissions will be evaluated based on multiple criteria, including but not limited to number of people served, outcomes projected, sustainable impact, depth of programs, diversity and more. Nonprofits can apply at EmpowerMakers.com between October 1 through October 31. More information about the Impact Challenge can be found at StanleyBlackandDecker.com.

“We encourage nonprofits to learn more about the Impact Challenge now and sign up for updates in advance of October’s open application period,” said Stanley Black & Decker’s Vice President of Social Impact, Diane Cantello. “The open application period in October also marks Stanley Black & Decker’s annual Maker Month, the company’s celebration of the makers, creators and tradespeople shaping the world around us – a perfect way for us to commemorate this month is with this important initiative designed to build a brighter future for our trade workforce.”

About Stanley Black & Decker
Stanley Black & Decker, an S&P 500 company, is a leading $14.5 billion global diversified industrial with 56,000 employees in more than 60 countries who make the tools, products and solutions to deliver on its Purpose, For Those Who Make The World. The Company operates the world's largest tools and storage business featuring iconic brands such as DEWALT, STANLEY, BLACK+DECKER and CRAFTSMAN; the world's second largest commercial electronic security company; and is a global industrial leader of highly engineered solutions within its engineered fastening and infrastructure businesses. Learn more at www.stanleyblackanddecker.com.

4“Trade School vs. College: Which One is Right For You?,” Community for Accredited Online Schools. https://www.accreditedschoolsonline.org/resources/trade-school-vs-college/

5“Why Trade School Might Be a Better Choice Than College,” Moneywise. https://moneywise.com/borrowing/student-loans/why-trade-school-might-be-a-better-choice-than-college