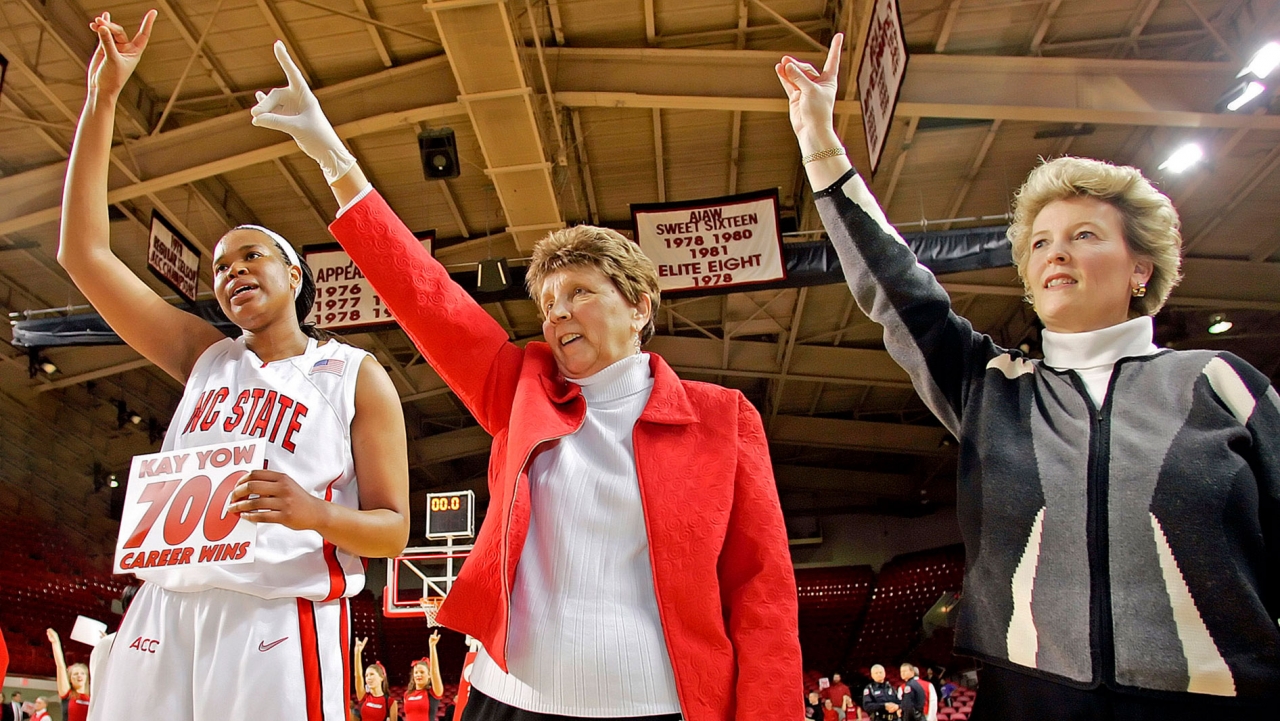 As a former collegiate women’s basketball coach, Stephanie Glance has observed her share of tough battles on the court. But none were as fierce as what she saw her mentor and friend, Coach Kay Yow, go through while living with breast cancer for 22 years.

Kay was a coaching icon, leading her North Carolina State teams to more than 700 wins at a time when women’s basketball was just beginning to have a national platform. Determined not to let cancer deter her, she also led the U.S Women’s Olympic team to a gold medal in 1988, while undergoing treatment for her first bout with breast cancer. At the same time, Kay used her clout and resources to help other women living with cancer get the care and help they needed.

Stephanie, who worked for 15 years as an associate head coach alongside Kay, says she can still hear the many words of wisdom imparted by her friend on and off the court. “My all-time favorite one is ‘We have little or no control over what happens to us in life, but we have 100% control over how we will respond.’”

Not one to give up, Kay responded to her health battles in a big way, starting the North Carolina-based Kay Yow Cancer Fund 13 months before she died in 2009. Stephanie left coaching in 2015 to become CEO of the fund, which aims to support scientific research, provide access to quality cancer healthcare for underserved women and unite communities in the fight against all cancers affecting women.

Breast cancer treatment and research have advanced tremendously since Kay’s death, but there’s still a huge gap in care and positive outcomes for underrepresented women, Stephanie notes. This is especially true for Black women, who are disproportionately diagnosed with, and more likely to die, from the aggressive and difficult-to-treat triple-negative breast cancer.

To date, the Kay Yow Cancer Fund has given nearly $8 million to research and to programs that educate and improve access – doing such things as bringing mobile mammograms to underserved communities and following diagnosed women through ongoing care while providing housing during treatment. Armed with data showing a lack of representation among Black women in cancer clinical trials, the organization’s National Underserved Program also focuses on making improvements in this area. Gilead recently awarded two grants to the program to help increase the number of Black women in clinical trials for triple-negative breast cancer.

Gilead’s support to the organization will help amplify visibility of the problem and provide solutions through education and activation of student athletes nationwide. College athletes are thought to be well positioned to serve as cancer-fighting ambassadors, and they’re being tapped to spread the word about the importance of early detection and care in their communities. The Kay Yow Cancer Fund has direct access to student athletes nationwide through its Play4Kay initiative.

"Through collegiate student athletes and college students in general, we’re embarking on a grassroots movement where we can truly change the narrative," Stephanie explains.

Stephanie says that carrying on the mission of her mentor, who she calls “the most beloved women's basketball coach,” is truly rewarding for her - but at the same time "there's this gnawing in your gut that is telling you we have to do more." As Kay would advise her to, she plans to press on.