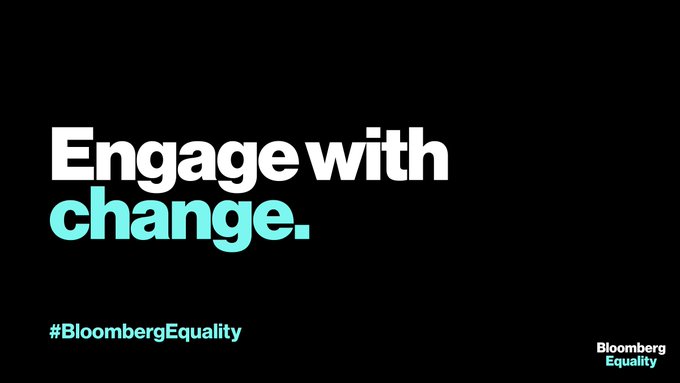 May 11, 2021 /CSRwire/– Bloomberg Media today announced the expansion of Bloomberg Equality to elevate issues of race, gender, diversity, and fairness within the governments, companies and societies that it covers. Harnessing the extensive reach of Bloomberg’s 2,700 journalists and analysts, Bloomberg Equality aims to provide data, context, and local nuance on every topic from corporate leadership and capital, to society and solutions that show the promise of progress. Content will be available on the Bloomberg Terminal and all Bloomberg Media platforms, including print, digital, social, video, streaming and OTT, broadcast, audio and events.

“As we chronicle capitalism, we must elevate its successes and call to account its failings. The pandemic’s economic downturn and last summer’s protests ignited a discourse around systemic inequalities,” said Jacqueline Simmons, Senior Executive Editor, Americas, Bloomberg News. “We’re building on our Equality franchise by deepening our commitment to report on this crucial topic, which intersects with every aspect of global business.”

Bloomberg’s audience will find expanded comprehensive news and unparalleled global insights on every platform including the redesigned Equality homepage on Bloomberg.com and the EQLY<GO> function for Terminal clients. Bloomberg Equality content will also be integrated across all of the existing content pillars and verticals, including Bloomberg Green, Prognosis, Bloomberg Tech, Bloomberg Citylab and more.

The vertical is supported by Bloomberg New Voices, a global newsroom initiative to feature more female executives and other under-represented expert sources across media platforms. The Bloomberg Equality homepage will include new editorial features such as the New Voices module, which will showcase broadcast clips of business and finance executives of diverse backgrounds who have participated in the initiative’s intensive media training program.

The cross platform expansion also includes a new original video series on Bloomberg Quicktake, Then This Happened, exploring how policy choices have affected people’s lives at pivotal moments; a weekly Quicktake segment titled Equality Now, on issues of inequality and systemic biases with a focus on economics, finance, technology, government and business; the third season of The Pay Check podcast and upcoming video series (May 6), which examines the intersection of money and inequality; Bloomberg Businessweek’s special equality themed issue; the weekly Bloomberg Equality newsletter featuring News Voices; Bloomberg Live’s Equality Summit; a special on Bloomberg Television (May 7); and a Race and Recovery tracker, which uses data and reporting to follow economic recovery by demographics across U.S. metropolitan areas, and more.

“The events of this past year have elevated global conversation and consciousness, and a new reckoning is taking place among companies, institutions and individuals everywhere,” said Anne Kawalerski, Global Chief Marketing Officer, Bloomberg Media. “Modern leaders have a new imperative, as equality is inextricably linked to almost every major issue shaping the world today — from how business gets done to urgent challenges like climate, global health and education. With Bloomberg Equality, we aim to be a critical resource for our partners and audiences as they seek to better understand — and take action around — these important issues.”

Editorial efforts are led by Simmons and Executive Editor Rakshita Saluja, who oversees the Bloomberg Equality Task Force – a group of editors and reporters from all corners of the newsroom. Formed in 2020, the task force has tapped into existing Bloomberg resources and proprietary data to produce compelling, data-driven storytelling, such as using Bloomberg’s Gender-Equality Index to track the progress that companies are making toward creating diverse workforces.

Cisco is a partner of Bloomberg Equality, and will support the multiplatform expansion across its first year, in a collaborative effort to better understand, elevate and take action around these important issues.

“As we do our part to deliver on our promise to create an Inclusive Future for All, our success depends on how well we take action and inspire others to do the same,” said Shari Slate, Vice President of Inclusive Future & Strategy and Chief Inclusion & Collaboration Officer at Cisco. “We are so excited for the opportunity to partner with Bloomberg, which has an incredible platform to help amplify and spotlight critical issues addressing our most vulnerable communities. We look forward to collaborating with leaders around the world who share our passion for finding global solutions to justice, fairness and equality.”

About Bloomberg Media:
Bloomberg Media is a leading, global, multi-platform brand that provides decision-makers with timely news, analysis and intelligence on business, finance, technology, climate change, politics and more. Powered by a newsroom of over 2,700 journalists and analysts, it reaches influential audiences worldwide across every platform including digital, social, TV, radio, print and live events. Bloomberg Media is a division of Bloomberg LP. Visit BloombergMedia.com for more information.