Saluting the Women of the Civil Rights Movement 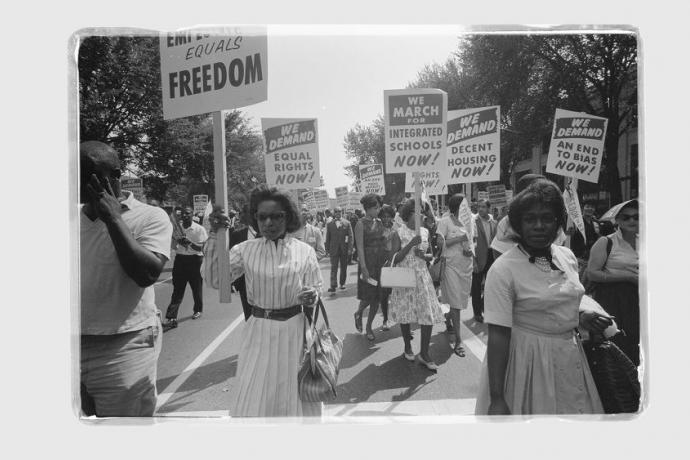 “Everything was segregated. … ‘Know your place and stay in it.’ Black children were taught that early in life. The world is not the same — it’s not equal for all people.”

I often wonder if civil rights activist Maude Burroughs Jackson knows how much her story has influenced my own sense of place as a young Black woman in America today. Growing up, I attended a predominantly white high school in New Jersey, where I was almost exclusively the only student of color in class.

U.S. History class challenged me most — not because of the course material, but for what it lacked. Black history lessons offered little beyond Rosa Parks, Dr. King, slavery, and oppression — all important parts of our history. My family, sorority, and other social affiliations filled in the gaps. Today, my work at Comcast makes me so proud because it gives me a platform to help tell the histories of so many women — like Little Rock Mayor Lottie Shackelford, anti-discrimination warriors like Josie Johnson, and student human-rights activists like my Alpha Kappa Alpha sorority sister, Judge Brenda Hill Cole. These names may not be known by many — they were not in my high school textbooks — but their work and civil rights legacy benefit us all.

As a public programming production assistant, I help third-party organizations share their stories through Comcast Newsmakers; and I am proud to work on Comcast NBCUniversal’s award-winning Voices of the Civil Rights Movement platform, which is home to more than 17 hours of historical narratives and firsthand accounts, including the stories of Mayor Shackelford, Mrs. Johnson, and Judge Cole. Voices honors the leaders and everyday people who have championed racial equity in America from the ‘50s and ‘60s and through today. The platform is available to Comcast customers on Xfinity X1, Flex, and Stream, and is also free and ungated to the general public at CivRightsVoices.com.

To commemorate Women’s History Month, we’re elevating the often-untold stories of extraordinary women who have worked to advance civil and human rights across all aspects of American life. Here are three I’m especially proud to share.

I will never forget meeting Little Rock Nine member Carlotta Walls LaNier at a Comcast Black Employee Network event in 2017. I was extremely humbled to be in the presence of a woman who played a crucial role in school desegregation, who was not only the youngest member of the Little Rock Nine, but also the only girl of the group to graduate from the historic Little Rock Central High School. The photo of Mrs. Walls LaNier being escorted into the school by National Guard troops is a constant reminder to me of her bravery and resilience as a young Black woman. I have developed a personal relationship with Mrs. LaNier over the past few years and the impact she’s had on my life is one that I will forever cherish.

Also in our collection is Shirley Franklin, Atlanta’s first female mayor. I met Mayor Franklin at a Voices production in the summer of 2018 in Atlanta. I vividly remember her walking through the door and immediately feeling her presence in the room. As I listened to her share her story, from working with former Atlanta Mayor Maynard Jackson and former U.N. Ambassador Andrew Young, to eventually becoming Atlanta’s first female mayor herself, I was most compelled by her strong work ethic, persistence, and courage. At that time, there weren’t many women involved in politics — let alone Black women — and knowing she had the resolve to step up and lead her city truly inspires me.

And, you’ll be amazed by the story of student activist Joan Trumpauer Mulholland — who devoted herself to protesting in solidarity with her Black peers in the ‘60s. As the civil rights movement began to accelerate, she attended a Presbyterian youth meeting. There, she met several student protesters who were involved in sit-ins. Ms. Trumpauer Mulholland decided to join the civil rights movement, taking part in “Freedom Rides,” enduring violence while sitting-in at the Woolworth’s lunch counter in Jackson, Miss., and facing prison time for her role in peacefully demonstrating for racial equity.

Each of these women — and the powerful lessons they share — have impacted me profoundly. I draw inspiration from knowing many of these women stood up for what’s right when they were younger than I am today — often when the outcome of their actions was largely uncertain. While Voices interviews are being recorded, I sit behind the curtain and take detailed notes, and I always get swept up by the emotion in the room — happiness, sadness, anger, fear, and gratitude. Our interviewees faced immense difficulty — and yet, something within them gave them the determination to overcome — and they did.

As I reflect on these remarkable women, I see myself and my own potential in their stories — and I could not be prouder to work for a company that makes diverse storytelling and programming a priority. I find joy in my work because I know Voices is informing and inspiring viewers of all ages and backgrounds.

Thinking back to my U.S. History class, today I recognize more than ever the need for Voices as a free educational platform for everyone. It’s my hope that for every young woman of color who takes the time to learn from the content, she will honor the Voices civil rights leaders who have led with courage and redefined what it means to “know your place.” Our place is a welcome voice at the table, adding value to our teams at every career level, pursuing all our ambitions, and inspired by the strength of so many women who paved the way.