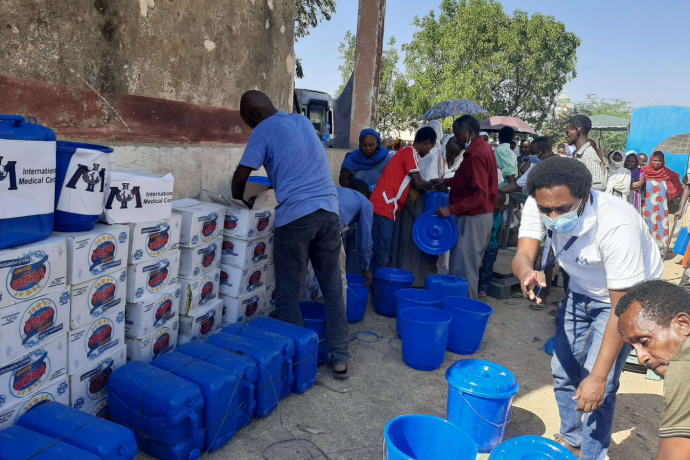 International Medical Corps is using Wearsafe to help keep its staff and volunteers connected while they work to relieve the suffering of those affected by war, natural disaster and disease in the Tigray region of Ethiopia and in other remote locations such as, DRC, Mali, Guinea, Zimbabwe, Jordan and Syria.

In 2014, my parents had a fire in their Connecticut home and were not able to contact me until a few hours later.  As I began to think of ways they could have instantly called me for help, my business partner Phil Giancarlo and I wanted to find a way to give those in danger the ability to contact friends, family, and colleagues even if they could not reach for a cell phone.

Before the fire, we both thought of personal safety as simply being prepared. We were taught that we could reduce the risk of being in harm's way by being alert and aware of your surroundings. After the fire, we realized personal safety is not only about being prepared, it’s also about being connected and so we created the Wearsafe Safety Platform.

We knew that while some phones may have SOS buttons, there will be situations when you cannot reach for your phone and call for help. In addition, there may be times that you feel threatened unsafe, and reaching for your phone may escalate a situation. And we know that when someone is scared, anxious, or panicked it may be difficult to unlock your phone and make a call.

When the Wearsafe app is activated either by the press of the Wearsafe Tag, a voice-activated phrase to an IoT device or the tap of the app on a smartwatch, designated contacts immediately receive an alert through email or text. A Wearsafe alert contains live-audio and an exact GPS location, so the right type of help can be coordinated by the ones who know you best.  Also, Wearsafe's Accident Medical Expense Protection coverage (AME) covers expenses for medical treatment and emergency transportation due to accidents, injuries, or falls.

During COVID, Wearsafe provided individuals the ability to stay connected with their loved ones when it was unsafe for them to be together.  Whether a senior whose children could not visit or check in, to the first responders going to work each and every day, Wearsafe morphed into a Smart PPE device as it enabled individuals to live their lives on their own terms while being connected.

“I originally purchased Wearsafe so that my husband would have peace of mind if something happened and he wasn’t around” says  Barbara Bradley, an avid gardener who fell and broke her wrist when she was in her garden last year.  “But when COVID began and my kids could not visit, they felt more comfortable knowing I was using Wearsafe. Now that travel restrictions are lifting, Wearsafe will be with me wherever I go.”

“When my son with Autism went back to school in person, I included a Wearsafe Tag on his backpack,” says Beth Pilchik. “If he has a problem, my son can use Wearsafe to send an alert to me so I know exactly what the situation is and how to initiate help. Wearsafe keeps me calm and in control.”

In addition to Barbara, Beth and so many others, Wearsafe has become a tool in their safety toolkit. "For survivors of domestic violence, who often need to be able to get help discreetly, so as not to escalate a situation, Wearsafe's platform and the nondescript Wearsafe Tag provide another option for survivors to access immediate support, without having to say a word," says Katie Ray-Jones, CEO of National Domestic Violence Hotline.

...And Abroad, anywhere in the World

In addition to enhancing personal safety for individuals, their families and friends, Wearsafe is being used in businesses and organizations to keep their employees and volunteers safe. Both in the US and abroad, Wearsafe has been incorporated into safety and communications protocols. Wearsafe uses low power and low bandwidth technology, but despite its size and strength, it is designed to provide users with a significant amount of safety and power.

Last year, Wearsafe partnered with International Medical Corps to help keep its staff and volunteers connected while they work to relieve the suffering of those affected by war, natural disaster and disease, delivering vital healthcare services and training to help devastated populations return to self-reliance.

With a staff of more than 7,300, 95% of them recruited locally, the humanitarian organization is always looking for ways to keep its community safe and connected. By leveraging the Wearsafe platform, International Medical Corps field staff can immediately let their security team and colleagues know when they need help. The GPS location and the live audio embedded in the alert provides the context for what type of help is needed and can reduce the time it takes to respond.

“Our team in the Tigray region in Ethiopia is using Wearsafe, and we are able to know the near-exact location on our staff every step of the way, pinpointing where they are and ensuring that they are safe,” says Director of Global Security, Tim McAtee. “Technology like this is particularly important and helpful, given the active civil conflict going on around them in a remote geographic area.”

In addition to Ethiopia, Wearsafe has helped support International Medical Corps’ efforts in northeast Nigeria, which is besieged by Boko Haram insurgents, as well as the Bahamas following Hurricane Dorian. Its emergency response team of doctors, nurses, and specialists were deployed to provide care throughout Grand Bahama island, where the health system and much of the island’s infrastructure was decimated.

And in eastern Democratic Republic of Congo, Jean*, one of 200 International Medical Corps staff members working in conflict-affected areas, says, “Devices like Wearsafe help me feel safer, knowing that I have another line of communication available. We work in dangerous and remote environments. Having a simple voice-activated device to stay connected and get assistance, gives me a greater sense of security.”

Whether you are located in a large metropolitan area, a small town or the Democratic Republic of the Congo, remember you are never alone.  Wearsafe gives individuals independence and lets individuals live the life they want to live.  Personal safety is not only about being prepared. It's about being connected - and empowered- wherever you are.

Wearsafe Labs is a technology company on a mission to make the word safer. Society has changed in the last few decades and the Wearsafe team believes that our safety resources should too. By using the latest technological advancements to coordinate appropriate, immediate responses, Wearsafe brings safety into the 21st century. In this fast paced, digital world,  the Wearsafe  Tag  and Platform,  gives everyone the ability to connect instantly and get help in real time, allowing us to feel more confident and secure, every day.