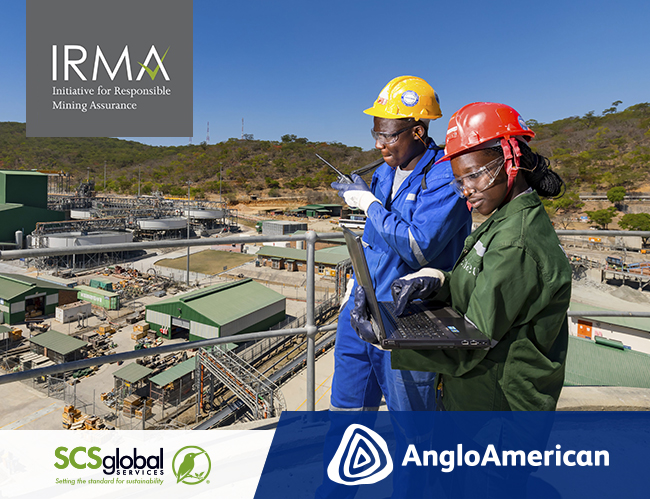 EMERYVILLE, Calif., February 24, 2021 /CSRwire/- SCS Global Services, an international leader in sustainability standards development and third-party certification, is pleased to confirm that Anglo American’s Unki platinum mine in Zimbabwe has earned the Initiative for Responsible Mining Assurance (IRMA) 75 level for responsible mining, based on the completion of an independent audit. Unki was the first mining company in the world to publicly commit to an independent audit against the IRMA standard in 2019, and is the first mine in Africa and the first producing platinum group metals operation to complete the audit, as well as the first mine in the world to achieve IRMA 75.

Founded in 2006, IRMA has established a comprehensive social and environmental standard for mined materials. The IRMA Standard was developed through a multi-stakeholder process, which included mining industry executives, NGOs, labor unions, consumers and communities impacted by mining practices. SCS Global Services and Anglo American are both long-term participants in the IRMA Standard development process, and SCS is one of only two current IRMA audit partners. Through its multi-tiered levels of achievement, benchmarked against a set of critical requirements, the IRMA standard encourages mines to demonstrate their sustainability performance and continuous improvement backed by third-party verification.

The Unki mine was audited against criteria in four main sustainability categories: business integrity, planning for positive legacy, social responsibility and environmental responsibility. Unki achieved IRMA 75, a first in the IRMA system and a representation of Anglo American’s leadership in the mining sector and the improvements made over the last few years to align with IRMA’s high-bar expectations.

“As the certification body for Anglo American’s Unki Platinum Mine, we are pleased to be able to confirm its ground-breaking achievement in reaching the IRMA 75 level,” said Stanley Mathuram, Executive Vice President at SCS Global Services. “The auditing process involved an extremely detailed examination of practices and performance, with on-the-ground inspections, interviews with management and employees, stakeholder consultations, documentation review and more. The IRMA verification signifies that this mine has achieved important milestones of transparency and performance in responsible mining and is on the path to continued improvement.”

Natasha Viljoen, Chief Executive of Anglo American’s Platinum Group Metals business, said: “Anglo American has a longstanding commitment as a leader in sustainability. Consumers around the world are increasingly and rightly demanding products made from metals and minerals that are responsibly sourced, meeting the highest ethical and sustainability standards. Our alignment with IRMA is part of our Sustainable Mining Plan commitment to assure all our operations against a recognised responsible mining standard by 2025.”

“Anglo American’s bold move to distinguish themselves in the world’s most comprehensive and rigorous responsible mining program sets the stage for greater environmental and social responsibility across the global mining industry,” said Aimee Boulanger, Executive Director of the Initiative for Responsible Mining Assurance (IRMA). “By achieving IRMA Level 75 at their first mine, Anglo is showcasing their commitment to supporting transparency, continuing improvement and best practices.”

About SCS Global Services
SCS Global Services is a global leader in third-party environmental and sustainability veriﬁcation, certiﬁcation, auditing, testing, and standards development. Its programs span a cross-section of industries, recognizing achievements in natural resource management, green building, product manufacturing, food and agriculture, forestry, consumer products, and more. Headquartered in Emeryville, California, SCS has representatives and affiliate offices throughout the Americas, Asia/Pacific, Europe and Africa. Its broad network of auditors are experts in their fields, and the company is a trusted partner to companies, agencies and advocacy organizations due to its dedication to quality and professionalism. SCS is a chartered Beneﬁt Corporation, reﬂecting its commitment to socially and environmentally responsible business practices. For more information, visit www.scsglobalservices.com and to learn more about IRMA certification, visit https://www.scsglobalservices.com/services/irma-certification.

About Anglo American
Anglo American is a leading global mining company and our products are the essential ingredients in almost every aspect of modern life. Our portfolio of world-class competitive operations, development projects and undeveloped resources, provides many of the metals and minerals that enable a cleaner, greener, more sustainable world and that meet the fast-growing consumer-driven demands of developed and maturing economies. With our people at the heart of our business, we use innovative practices and the latest technologies to mine, process, move and market our products to our customers – and to discover new resources – safely and sustainably. https://www.angloamerican.com

About Initiative for Responsible Mining Assurance (IRMA)
IRMA is a voluntary certification system meant to complement strong laws and government oversight. It is also the world’s first and only global definition of what constitutes leading practices in social and environmental responsibility for large-scale mining operations. IRMA aspires to meet the vision of a world in which the mining industry respects the human rights and aspirations of affected communities; provides safe, healthy, and respectful workplaces; minimizes harm to the environment; and leave positive legacies. responsiblemining.net

SCS is a leading third-party provider of certification, auditing and testing services, and standards, founded in 1984. Our goal is to recognize the highest levels of performance in food safety and quality, environmental protection and social responsibility in the private and public sectors, and to stimulate continuous improvement in sustainable development.