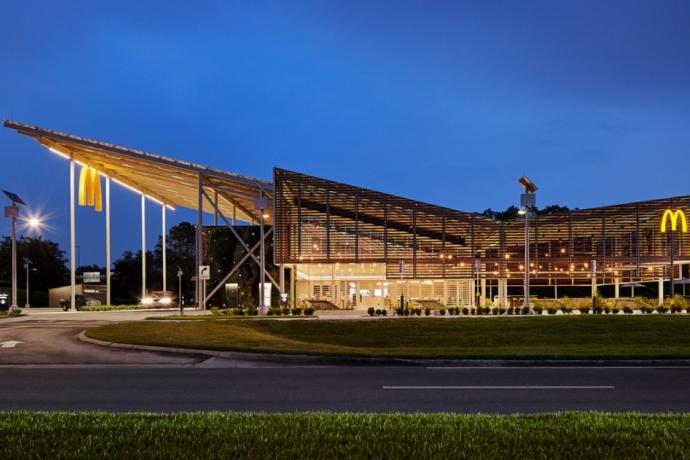 Eight decades after McDonald’s restaurant revolutionized a speedier way to prepare and serve meals, the fast-food giant is once again setting new standards in the industry, laying the groundwork for a more ecologically responsible place to dine.

The façade of the 8,000-square-foot McDonald’s at Disney World in Buena Vista, Florida, not only appears strikingly different than its traditional restaurant chain, but every segment of the building has been meticulously designed to create the world’s first “net-zero” fast food restaurant.

“It’s McDonald’s goal to reduce its carbon emissions across its portfolio,” said Jean Gibbons, WSP USA buildings vice president. “McDonald’s has intended to use this project as a pilot for future energy reductions steps in new and existing restaurants and future net-zero developments.”

Working with Chicago-based Ross Barney Architects on behalf of the McDonald’s Corporation, WSP was responsible for developing the mechanical, electrical, and plumbing engineering concepts through design development and energy analysis through design and start-up, both critical in enabling the project to reach its carbon neutral objectives.

To naturally cool and shade the interior, the building also features green walls that are covered with vegetation, mimicking the building’s wetlands surroundings and lowering the incident solar radiation onto the restaurant walls. Also, the large canopy over the restaurant supporting the photovoltaic array does double duty, shading the entire building and outdoor dining patio while generating electricity for the restaurant.

Fast food restaurants tend to consume a lot of energy, and the new building consumes about 35 percent less energy than a baseline McDonald’s restaurant.

The modern exterior of the restaurant features wooden louvers that encase the entire building and outdoor eating area.

Matching the style of the wooden louver panels are the slatted jalousie windows on two walls that can be automatically opened as needed to support natural ventilation within the restaurant, while rooftop-mounted exhaust fans draw outside air through the building, providing a lower-energy alternative to running the air conditioning during the spring, early summer, and fall seasons.

It was vital that the facility not only reduce energy consumption as much as possible, but also generate as much on-site energy as would be required to operate the business.  Thus, the photovoltaic array size was determined based on the projected energy consumption of the building. No off-site green power is purchased to attain net-zero compliance.

The interior of the restaurant is dominated by daylighting to minimize the use of artificial lighting, and sensors will selectively turn off light zones to reduce the energy consumption based on daylight and occupancy levels.

“The project explored many off-the-shelf ideas in order to maximize the efficiency,” Abbasi said. “It was a big challenge to perform many unique analyses for the first time and develop an energy model that included extensive details to have a higher accuracy.”

A restaurant’s biggest consumer of energy is the kitchen equipment, and the new restaurant incorporates a design that optimizes kitchen efficiency, including the introduction of more efficient compressors and seals for refrigeration, and standby mode sensors to reduce the consumption from high-energy equipment when inactive.

WSP played an important role in calculating different systems in the schematic design phase including ground source systems and water source VRF, and for designing the hybrid conditioning system that incorporates natural ventilation.

In order to monitor the building’s net-zero performance, McDonald’s Corporation is sub-metering each of the different systems, which will demonstrate the energy balance between photovoltaic production and energy consumption. The client will then use this data to pursue the International Living Future Institute’s Net Zero certification.

For a business that typically demands high energy use to operate, creating a net-zero environment without sacrificing other critical aspects of the business is a major breakthrough for the fast-food restaurant industry. It is expected to serve as a model of the possibilities that exist for similar Future Ready™ businesses wishing to establish environmentally responsible practices within their facilities.

“The success of this project will not only influence the design of McDonald’s restaurants in the future, but it will also serve to encourage similar projects to pursue net-zero targets, even those with similar high energy use intensity,” Gibbons said.